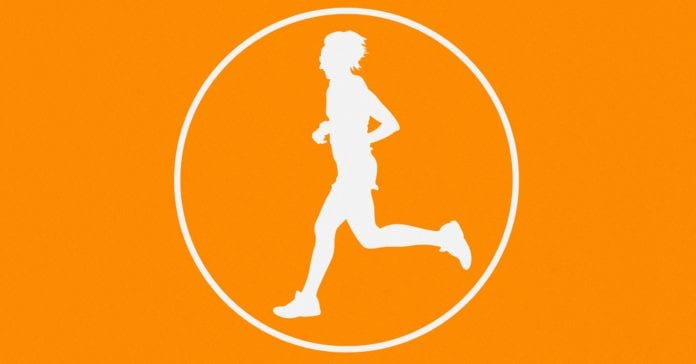 No one can deny that there are some great physics videos out there in the wild internet. Today, I found this one

floating around—featuring what appears to be a worker that needs to get out of a cone-shaped hole. Oh sure, he could possibly climb up the side or maybe even use a rope as an assist. But no. This guy studied his physics. He knows a great trick to get out of this hole—by running in circle. But how does it work?

Climbing Up the Side

Suppose this was just an ordinary worker that tried to walk straight up the side of the hole. Of course there must be some force on him to prevent him from sliding back down the incline—that’s the frictional force. The frictional force is parallel to the surface of the hole, and its magnitude depends on two factors. The first is called the coefficient of static friction, which is normally represented by the variable μs. Depending on the two types of surfaces interacting, the coefficient will have a value between 0 and 1; the higher the value, the rougher the interaction. The second factor is the normal force: the force the surface exerts on the object that is perpendicular to the surface. If you have a flat surface with an object at rest, the surface pushes up with the same force as the gravitational force pulling down. However, as you move to a sloped surface, this value decreases. Overall, I can write the maximum frictional force as:

How steep of an incline can you walk up? This depends on both the coefficient of friction and the incline angle. If a person is moving up at a constant speed, then the net force must be zero. Here is a force diagram showing a human moving up a slope that is tilted θ above the horizontal. Yes, I am using a box to represent the person. It’s fine.

This is why it’s difficult to walk up a very steep slope. The steeper the slope, the lower the normal force. With a smaller normal force you will have a lower maximum frictional force. At some point, you just start sliding down the slope. That’s bad.

Running in a Circle

Here’s where the physics trick comes into play. If you could increase the normal force on a human, you would also increase the frictional force. But how could you do this?

Imagine that you’re riding in a car and this car is driving around in a circle turning to the left. If the car is turning to the left, there must be some force pushing you in the direction of the turn (and towards the center of the circle). This force might be from the door or maybe from the seatbelt, but there must be a force. When an object moves in a circle (even at a constant speed), it must have an acceleration component perpendicular to the velocity. The magnitude of this acceleration increases as you increase the speed and decreases as you increase the size of the circle.

If you have an acceleration, you have to have a force. So in order to move in a circle there needs to be a force.

Now back to the construction worker. When he runs in a circle, he needs that extra force to push towards the center of the hole. This extra circular force (technically, it would be call the centripetal force) would have to come from the normal force. Yes, the total magnitude of the normal force would increase so that there would a larger component of this force pointing towards the center of the circle. With a larger normal force, you get a larger frictional force. Boom. That’s just what he needs—a larger frictional force to escape the hole.