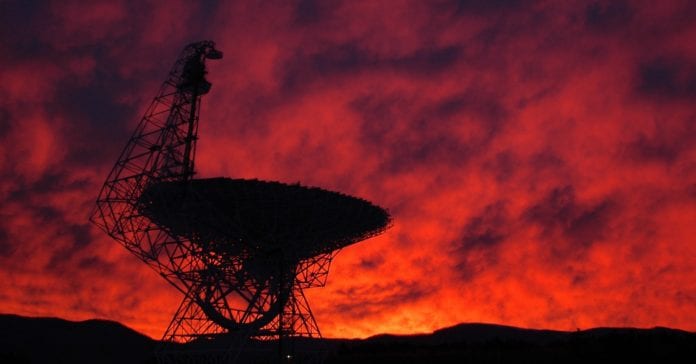 It’s a fallish day in the Allegheny Mountains of West Virginia, the rural home of Green Bank Observatory and the world’s largest fully steerable telescope. Rippled clouds hang low over the site’s hulking 100-meter radio dish, itself undergirded and overhung by bright white scaffolding. The browning leaves are nearly gone. And the visitor center director, Sherry McCarty, has agreed to give me the astronomy center’s new SETI tour ($40, reservations required).

McCarty leads us toward a Jeep Liberty—diesel, so spark plugs won’t create radio waves that interfere with the telescope’s observations—and hands me a hard hat. Learning about the history of alien hunting is risky business, after all. Soon, we’re driving toward the US GOVERNMENT PRIVATE PROPERTY gate, beyond which radio-blasting cell phones are totally, 100 percent prohibited. I check my back pocket to make sure I left my phone behind.

Highlighting SETI history is kind of a departure for Green Bank, which has tried, if not to distance itself from extraterrestrial excitation, then to emphasize its work in more traditional radio astronomy: gas clouds, galaxies, supernova remnants, black holes, and other staid stuff.

When I taught students here between 2010 and 2012, I sometimes led the regular site tours. People would often ask me, “So … have you found aliens yet?” Each time, I’d let out a silent scream. Of course that would have come first in my spiel and also in all other conversations ever—and besides, the observatory didn’t even really do SETI work at the time. Like me, most comms people at the observatory spoke of SETI as more of a comma than an exclamation point in Green Bank’s history.

But that changed—quickly, dramatically—in 2016, when the billionaire-backed Breakthrough Listen project bought a bunch of time on the 100-meter Green Bank Telescope. Now, a significant fraction of the observatory’s funding and sky-scanning time do go toward looking for extraterrestrial intelligence. “That was the reason for the tour,” says McCarty. “We could finally say we were looking.”

Of course, that means Green Bank has to abandon some astronomical objects of interest—in favor of alien-hunting.

Most of Green Bank’s science projects have, historically, happened through a kind of democratic process. Under a National Science Foundation policy called “open skies,” anyone can submit a proposal outlining what they’d like to do with the flagship telescope. A committee ranks those ideas according to scientific merit, doling out telescope time starting at the top of the list.

But in 2012, the NSF began to talk about “divesting” itself from Green Bank, and spending its money instead on newer telescopes. With an ever-decreasing budget from the NSF—down to 60 percent of operating costs in 2017, and just 30 percent in 2018—the observatory needed alternative funding. So when entrepreneur Yuri Milner’s Breakthrough Listen came to town with millions of dollars and 10-year backing, Green Bank bit (according to investigations of the Paradise Papers, first released Sunday, Kremlin money helped back Milner’s lucrative investments in Twitter and Facebook). Today, Breakthrough’s SETI work uses (and pays for) about 20 percent of the telescope’s time.

But even moonshot-scale funding can’t magically create more hours in a day. That 20 percent had to come from somewhere. And it came from partially closing the skies.

Half a mile from the gate, McCarty pulls the Jeep up to an 85-foot radio dish called the Tatel telescope—the first stop on the SETI tour. The no-longer-operational telescope is rusty, and so paint-chipped it looks almost heathered. In 1960, a 29-year-old named Frank Drake used this scope to peer at two nearby stars, just to see if maybe perhaps some cosmic beast was broadcasting from them. (It wasn’t.) He called his project—the world’s first scientific SETI experiment—Ozma.

Back in my Green Bank days, I would gesture at this telescope from the tour bus, say a whiz-bang sentence or two about this seminal SETI work, and keep on driving. But on this tour, says McCarty, the audience spends about 40 minutes stalking around SETI’s birthplace, its control room freshly spruced for visitors. Before they started the SETI tour, Green Bank employees had to clear it of dead mice, dead snakes, dead birds. Inside, typewriter-labeled drawers slide in and out of a cabinet, still full: If you need potentiometers, they can, in fact, be found in the drawer labeled “potentiometers.”

The typical tour-goers aren’t woo-woo—just curious (although a few have felt out an audience for their abduction stories). “They, like Frank Drake, have always wondered if we’re alone,” says McCarty. Finally, now that the observatory is revving up the SETI work people always thought they were doing anyway, it’s justified in giving the people what they want. Especially since, at $40 a head and 20 people a pre-reserved tour, the observatory can make $800 doing it.

The data from Breakthrough will, eventually, support non-SETI science, in the form of a public database: observations of the star systems and nearby galaxies Breakthrough has observed, at frequencies from 1 to 15 gigahertz. “It’s win-win,” says senior education officer Sue Ann Heatherly. “You’ve got open data instead of open skies.”

But it’s not as good as pointing the scope at the spot you actually want to study, for the amount of time you want to study it, with the instruments you think best, at the frequencies you think are most stellar, etc. With less time available, “it makes the competition fiercer,” says Heatherly. Green Bank’s scientists feel the absence of those hours.

“They don’t have anything against SETI at all,” says program manager and assistant business manager Marty Bloss. “But they really hate losing open skies.”

When SETI tourists are done at the old telescopes, they go down to the big, modern instrument—the actual Green Bank Telescope. Completed in 2000, it’s taller than the Statue of Liberty, and its 100-meter dish encompasses 2.3 acres. It looks like someone dismantled a bridge’s scaffolding and turned it into a Transformer that resembles a giant Dish Network antenna. Here, the tourists hear about present SETI and then zip over to a room called the Drake Lounge.

There, in 1961, Frank Drake first presented the famous Drake Equation, which lists the variables that determine how many detectable communicative civilizations might be in our galaxy. A rotating cast of scientists meets the tourists there, to talk through that math and the SETI work that is keeping the lights on and the cryogenics pumping.

In the end, people always want to know what the scientist thinks. You know, are we alone? What’s the deal?

Some of the scientists are optimistic, or neutral, about our chances of answering that question (and answering it with “Nope!”). Others, less so (others much less so). All give their frank opinions.

McCarty has a simple answer. “I say there’s at least one example of life forming,” she says. “It’s us.”

GizmoCrazed - July 1, 2018 0
Joanna Glasner Contributor More posts by this contributor VCs serve up a large helping of cash to startups disrupting food US startups off to a strong M&A...

SeaBubbles shows off its ‘flying’ all-electric boat in Miami