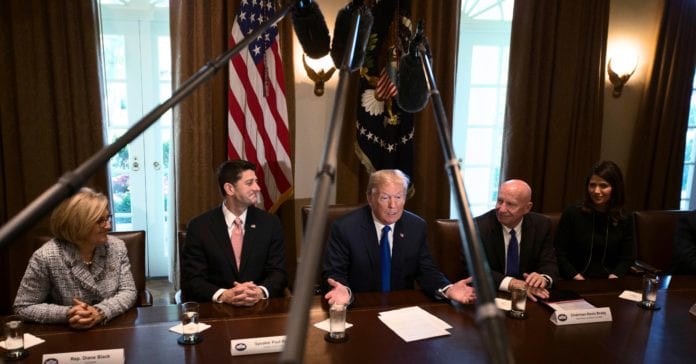 Amanda Coston was preparing for a meeting with her advisor Monday afternoon when her friend, another first-year PhD student in Carnegie Mellon’s machine learning department, knocked on her door. Had she seen the email? A few minutes earlier, the university’s Graduate Student Association had sent a Google Doc to department representatives across the university, and those reps had forwarded the document to their grad students.

That document, which you can see for yourself here, details the devastating impact the GOP’s recently unveiled tax-reform plan could have on the university’s PhD candidates. Buried in that plan is a proposed repeal that would cause graduate students’ tuition waivers to be counted as income—making them subject to taxes. The document analyzes how the repeal would affect graduate students in colleges across Carnegie Mellon.

The annual stipend for a PhD student in Carnegie Mellon’s school of computer science is about $32,400. The university covers the student’s $43,000 tuition, in exchange for the research she conducts and the courses she teaches. Under current law, the government taxes only a student’s stipend; the waived tuition is not taken into account. But under the GOP bill, her annual taxable income would rise from $32,400 to $76,234. Even factoring in new deductions also included in the proposal, the CMU document estimates her taxes would amount to $10,209 per year—nearly four times the amount under current law. That would slash her net annual stipend by 25 percent, from $29,566 to $22,191.

“It was just such a shock,” says Coston, who expects her degree will take another five years to complete. If the repeal were to become law, it would take effect in 2018–2019. “It really changes the calculus on my finances. This suddenly makes a lot of things like rent, car payments, groceries, all that stuff, no longer affordable.”

And not just for her. Current and would-be graduate students fear that, were the bill to pass, getting a PhD in the US could become financially impossible. “I monitor all legislation at the state and federal levels that could affect graduate and professional students, and this is just—this would have the greatest negative impact of anything I’ve seen,” says Samantha Hernandez, legislative director of the National Association of Graduate-Professional Students. “It would be devastating.”

For years, PhD candidates have “paid” for their educations almost exclusively through research and teaching—working in labs, TAing courses, hosting office hours. It works like an apprenticeship: Trade five years of your life learning and working in a field that interests you in exchange for a meager, but livable, salary. “The point is to be stressed about class work and research—not finances,” Coston says. Fewer than 10 percent of PhD candidates in STEM fields rely primarily on their own money to pay for grad school; and in 2015, more than three-quarters graduated with no debt. (At least from their graduate programs; plenty of graduate students complete their PhDs burdened with debt from their undergrad years.)

But removing the promise of a living wage would dramatically affect people’s ability to pursue a graduate degree. “I think we’d see a shift in who even starts such a program,” says UT Austin computational biologist Claus Wilke, who also blogs on the subject of professional development in academia. A graduate education would quickly become something you pursue only if you can pay for it.

That’s a bad message to send to anyone driven to learn and innovate. You want talented people to study and contribute to what they’re passionate about—not what they can afford. “The people who were doing it for the love of science, or who were excited about going into teaching, or even because they have a lucrative career in mind—they may just decide they can’t do it,” Wilke says.

The GOP’s plan would also affect what PhDs do once they leave their graduate programs. PhDs are already less likely to go into academia than they once were, and a tax burden could compound the trend. Academic gigs can’t compete with industry jobs on salary, and they have a reputation for being less stable, Hernandez says, which leads people to pursue what she calls “alternative academic routes.”

In other words: The more debt students graduate with, the less likely they are to pursue relatively low-paying or financially risky jobs—in academia and elsewhere. That means fewer educated people teaching, experimenting, and innovating at research institutions, sure, but in other places, too. “Right now you can graduate debt free and work for the government, non profits, start your own company—you get to choose. But if you’ve accumulated a lot of debt, most students are going to look at high paying jobs that’ll let them pay off debt,” Coston says.

Many academics fear the tax burden would waylay efforts to increase social and intellectual diversity at their institutions. “You have to advocate for folks who are coming down the pipeline,” says UCLA neuroscientist Astra Bryant. She says that’s especially true of women and underrepresented minorities. “I mentor two underprivileged undergraduate women, and my concern for them is that an increased tax burden would make it financially impossible for them to afford to pursue a PhD.”

And what’s bad for grad students is bad for universities. PhD students are a linchpin of the undergraduate education model. When they’re not conducting research, they’re teaching classes, grading tests, and holding office hours. “And to be frank, at this point, they’re cheaper than adjunct professors,” Hernandez says. “You start removing them, and innovation, research, education—all of those things start to slow down. So there’s a huge impact on higher education as a whole.”

Not all PhDs will be affected equally. A document similar to the one circulated by Carnegie Mellon’s GSA is making the rounds at UC Berkeley, a public institution. That document estimates that the GOP’s proposal would increase tax burdens for students at public schools by 30 to 60 percent, compared to the several-hundred-percent increase seen by private school students who pay higher tuitions.

Public or private, the response from scientists is the same: “It’s been taking science Twitter by storm,” Bryant says. “I’m looking at my Twitter feed right now, and more and more people are chiming in to say this would be an unmitigated disaster.”

But Coston says it will take more than tweets to derail the GOPs proposal. “There’s a call-your-congressperson event scheduled for tomorrow, and I plan on going. That’s the immediate action item,” she says.