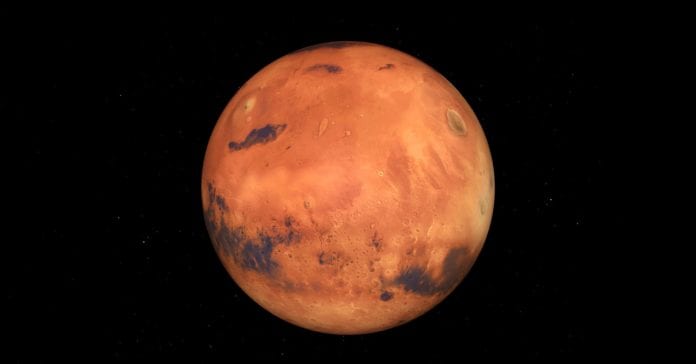 Recently, I gave my introductory physics course a fairly standard problem, based on the Matter and Interactions textbook. I’ve modified the question, but it goes something like this:

Here’s a diagram showing the spacecraft at the two different positions (along with a vector indicating the velocity).

I suppose I should state that the only significant interaction is between the spacecraft and Mars (ignore the sun).

So, how do you solve this problem? A common approach goes something like this: First, you can calculate the gravitational force on the spacecraft since you know the mass of Mars, the mass of the spacecraft, and the distance between them. This means that you can use the inverse-square law version of gravity.

With this force, you could possibly use the momentum principle to find the new momentum—the product of mass and velocity—at some later time.

Using the momentum principle to solve this problem is mostly just a dead end. It won’t work.

The simplest way to solve this problem is to use the work-energy principle. This says that if the work done on a system is zero, then the change in energy for that system must also be zero. With a system consisting of both the planet and the spacecraft, there will only be two energy terms. The craft will have kinetic energy and there will be a gravitational potential energy. These two terms are calculated as:

Yes, I know that’s more math than you were expecting. But I wanted to show that the solution to this problem was possible without too much effort. Putting in values for the starting velocity and the two positions, I get a velocity of 707 m/s. But notice that this is just the magnitude of the velocity, not the vector value of the velocity at point 2—but that’s all the work-energy principle gives you. It is just a scalar relationship with no vectors involved.

Perhaps you already know the answer to these questions—that would be great! However, I will solve the problem in a third way so the solution will be easier to see.

Yes, yes—I am going to use the momentum principle, even though I said that would be a bad idea. It was a bad idea because the force changed in both magnitude and direction during the motion of the spacecraft. But what if I only looked at a very short time interval instead of the whole trip?

If this interval was short enough then the change in the gravitational force would also be small. In that case I could approximate this gravitational force as constant—and that makes this a solvable problem. Oh wait, but I only did it for a short time interval. So in order to get the whole motion I will need to do many calculations over many short time intervals. And this is exactly what happens in a numerical calculation.

I won’t go through all the details, but here is a general outline of this numerical solution. For each small time step, I will do the following:

That’s it. I can just keep doing these steps until the spacecraft ends up at the second position. Here is that code. I’m going to start off with the same situation as the first question just to make sure the answers match up. Reminder—press the “play” to run the code and the “pencil” to look at or edit the code.

You probably can’t see it, but I also printed the final position and velocity. Yup—I get the same value as using the work energy principle.

Now it’s your turn. You need to modify the code so that the spacecraft starts off moving away and to the left from the planet. Try putting an initial angle of 30 degrees (this is in line 24 in the code above). Don’t worry, you won’t break anything. Just to be clear—if you change the starting velocity (vector) of the spacecraft, it will end up at a different location. But what will be the speed when it reaches the same distance of 8 x 107 meters? Oh, you might need to scroll down in the output window to see the print out of the speed.

But wait! Here’s something else that you might find useful. What if I plot the speed (magnitude of velocity) as a function of distance from Mars? This is what it looks like for the first case in which the spacecraft starts off moving perpendicular to the direction towards Mars (the first case). Also, you can see the code for this plot right here.

From this graph, you can see that as the craft gets farther from Mars, it goes at a slower speed. Now for the secret. If you made this graph for the second case (with the spacecraft angled away from Mars), you get the exact same plot. Perhaps you don’t believe me—why should you? In that case you can go to the code and change the initial velocity yourself.

It doesn’t matter which way the spacecraft is traveling. As long as it starts with the same speed at the same distance (not even the same location), you will get the exact same plot. Why? It’s because that plot essentially comes from the work-energy principle, and this is a scalar equation. It doesn’t depend on direction, so you don’t get a direction.

But in the end, a problem like this is much easier to solve with the work-energy principle. Take note, students.