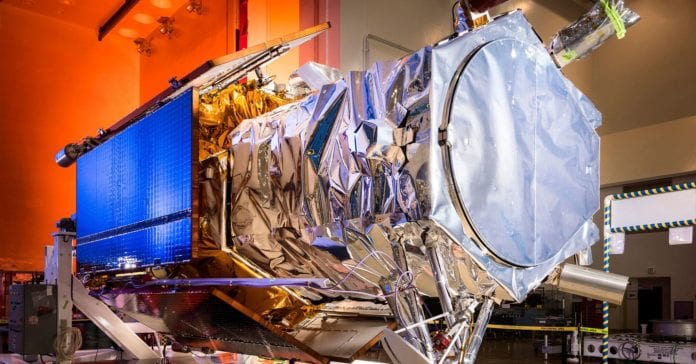 People at DigitalGlobe are fond of saying they’ve built a “time machine of the planet.” And, if we’re being metaphorical, that’s true: The satellite imaging company has used orbiters to take and store super sharp images of Earth for 17 years. Their eyes have gazed down as trees have disappeared and appeared, floodwaters have flowed in and out, and cities have boomed and busted. But that time-lapse is only useful if someone can make sense of its meaning. Today, that’s where companies like Orbital Insight come in, with artificial intelligence that parses the pictures and auto-says things like, “That looks like deforestation,” or “There are lots more cars in those parking lots than there were last year. Business be booming.”

In the world of satellite imagery, there are a few kinds of players: the picture-takers, the sense-makers, and those who are trying to do both. DigitalGlobe, with its ever-increasing cache of high-def history, is the planet’s lead picture-taker; Orbital Insight is one of the frontrunning sense-makers. And today, the two companies announced a new multiyear, multipetabyte partnership. Orbital Insight, in other words, has the keys to the time machine. “We want to let them race,” says Shay Har-Noy, DigitalGlobe’s vice president and general manager of platform.

With more images—including more new images more often—Orbital Insight’s artificial intelligence will become more insightful. In teaming up, these two companies have ensured that neither of them has to be all things to all people; instead, they can each do what they do best. The insights they produce together can affect economies, militaries, the planet’s health, the state of its infrastructure, the way we deal with disaster—and so, in turn, you.

The “why now” of this partnership has a simple answer: The Cloud. For a long time, if someone wanted DigitalGlobe’s satellite imagery, the company had to send the huge snapshots over a relatively slow connection, or in the actual mail. The image archive was largely on old-school magnetic tape, spun through cartridges and stored in a library. That made it hard for anyone to get the big picture. “If nobody can access the time machine, it isn’t worth very much,” says Har-Noy.

That’s how it was when Orbital Insight, then a new company, started requesting pics. In those early days—lo, these three years ago—it could only get so much imagery at once. And its algorithms—which learn as they’re exposed to more examples, and which can only give deep context if they have access to deep time—could only learn so much.

That changed in May, when DigitalGlobe put its entire archive, all 100 petabytes of it, onto an unmarked semi-truck and sent it to the cloud-based Amazon Web Services. Now, Orbital Insight can access and analyze the images where they are—on the web—rather than waiting for them to arrive.

Then things really start to happen. Pictures are cool (fact). People like to take them and have them and post them and share them. But when your phone is so full of snaps that you never swipe through all of them, or you can’t even remember what that first album was, your collection becomes less useful. Similarly, DigitalGlobe’s customers don’t necessarily want 25 shots of Beijing taken over five months. They don’t want to see anyone’s work; they just want the answer to their question.

Orbital Insight is now better primed to give them, using DigitalGlobe’s Geospatial Big Data Platform, or GBDX (also a good name for a culty workout system). Analysts can log on, grab images, and write an algorithm to, say, identify and count cars. You train that algorithm with pictures of a bunch of cars in a bunch of conditions, run the algorithm on new images, and sell the result: plain-language statements about a place’s busy-ness and what it means for business. It’s the same basic process artificial intelligence researchers follow for self-driving car or facial recognition software. “I want to get people to stop working on cat videos and start working on something that matters,” says Har-Noy. There are, he adds, a lot of artificial intelligence experts working on cat videos.

Orbital Insight CEO James Crawford has no such low-key, feline goals. “Our mission is to understand what we’re doing on and to the Earth,” he says. Which would have sounded less convincing before this “expanded partnership” with DigitalGlobe. Neither company will talk about just how expanded the partnership is. But Har-Noy will talk qualitatively. “It’s not a little bit of content,” he says. “It’s all you can eat.”

Then he pauses. “It’s not quite all you can eat,” he clarifies. “But it’s effectively meant to be on that order of magnitude.” DigitalGlobe has even agreed to spy on Orbital Insight’s spots of most interest more frequently.

On Orbital Insight’s menu are more stores, for car-counting; more oil tanks, to estimate crude supply; more mapping of poverty, so organizations like the World Bank know where to focus; and more tracking of deforestation, so algorithms can tell NGOs where to say, “Stop!”

Still, the partnership demonstrates the strange dynamics between the image-makers and the sense-makers. They can’t function without each other, but neither are they exclusive. Orbital Insight isn’t beholden to DigitalGlobe. It will get images from whatever satellite constellations it pleases—from Planet, e-GEOS, Sentinel. “I believe that the industry is best served by avoiding walled gardens,” says Crawford. “Our leaning is to have open competition on both sides.”

That’s fine, in Crawford’s opinion. “We’re happy to have the satellite companies sell their imagery to multiple companies,” he says. “We happen to think we’re better than anybody else, so that doesn’t worry us.”

Dear Hollywood, here are 5 female founders to showcase instead of...

GizmoCrazed - May 4, 2019 0
Joseph Flaherty Contributor More posts by this contributor Why the ‘end of the startup era’ could be great for entrepreneurs Invisible unicorns: 35 big companies...

Quest for a Peaceful Death

Worried about Wi-Fi security? This is the router you need.