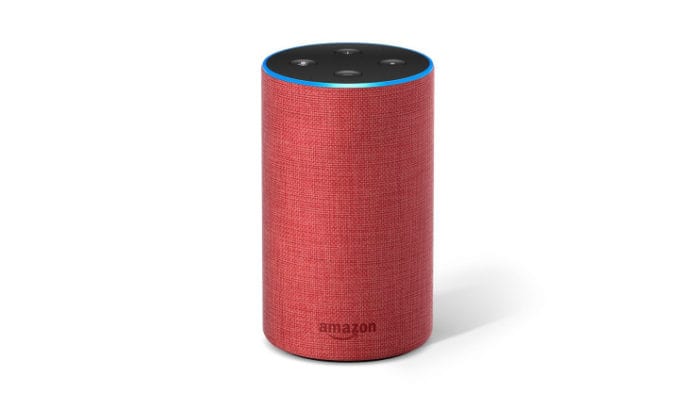 The new Echo is a better looking device than its predecessor, thanks in large part to its various fabric coverings. Now, there’s a new option for the outer shell: A PRODUCT(RED) special limited edition. The fabric outer comes in red, appropriately enough, and $10 of the purchase price (of $99.99, same as any other Echo) will go toward (RED)’s work fighting AIDS through the Global Fund.

Amazon isn’t the first to bring (RED) branding to a consumer gadget to support the fight against AIDS; Apple has a range of devices and accessories that work with the same campaign. Amazon’s Echo looks like a winner, though, with a unique design that’s probably worth keeping around to appeal to folks with a bit of a penchant for colors other than gray, other gray, darkest gray and fake wood.

The (RED) Echo is currently listing a release date of December 6 on Amazon, and, as mentioned, it’s going for the same price as the other iterations. Also, it doesn’t look like the “ECHO3PACK” promotion, which offers a $50 discount when you order any three second-generation Echo devices, applies to the (RED) version.

GizmoCrazed - May 17, 2019 0
If you had a choice between a better, faster cell phone signal and an accurate weather forecast, which would you pick? That’s the question...

What Are FRBs? The Discovery of Mysterious Signals From the Cosmos

“Check In” Is the Least Popular Activity Among Smartphone Users [STUDY]

A Better Solar Panel Through Buckets of Water, Rocks