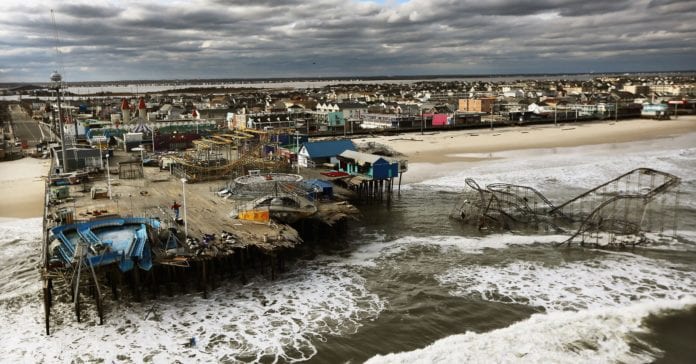 When hurricanes Harvey, Irma, and Maria recently pounded Texas, Florida, and Puerto Rico, the severity of the storms was often attributed to climate change. “Four Underappreciated Ways That Climate Change Could Make Hurricanes Even Worse,” was the headline in the Washington Post; “Hurricane Harvey’s Size and Impact Points to Climate Change,” noted NPR.

But five years ago, when Superstorm Sandy took its famous left turn to barrel into the East Coast, there was no such certainty. Instead, a debate played out in the media and on Twitter about whether it was fair to blame climate change for the storm’s intensity.

One reason why the conversation has changed is that the science has become much more advanced, especially in the field of attribution science—a relatively new discipline within climate science that looks at how climate change factors into individual weather events. During Hurricane Katrina in 2005, attribution science was in its “infancy,” one scientist told the Post, and even when Sandy hit, the dominant narrative was that climate change doesn’t necessarily affect individual extreme weather events. But today, both the computer models and how scientists have learned to communicate the lessons of climate science have become more sophisticated, and there is a growing body of peer-reviewed published literature on the subject, though not without some controversy.

One issue that’s received more attention is that, in the past, attribution studies started “with the assumption that a given event is ‘natural,’ and the burden of proof is on the claim that the event was caused, exacerbated, or made more likely” by human causes, social scientists Lisa Lloyd and Naomi Oreskes and climate scientist Michael Mann wrote in an article for Climatic Change that was published in 2017. “The null hypothesis is that there is no human contribution.”

But then came Superstorm Sandy. Researchers used data from the storm to try to get a handle on the effects of climate change on extreme weather. One of the major papers was from the National Center for Atmospheric Research’s Kevin Trenberth and two colleagues in 2015. They argued that it was necessary to come up with a new way of approaching attribution. Even though computer models weren’t yet sophisticated enough to account for all the atmospheric dynamics in climate change, it was still possible to account for other dynamics. The oceans are warmer and higher, and the atmosphere holds more moisture than it used to, which is linked to heavier rainfall.

Using Sandy’s weather models, which were very accurate, the researchers could alter the heat and the moisture levels of those models to account for climate change. The conclusion? “We find that indeed Superstorm Sandy is more intense, it is bigger, the rainfall is heavier, and so there’s a climate change component to the strength of that storm,” Trenberth tells Mother Jones. “The environment in which all these storms, including Superstorm Sandy, is occurring is fundamentally different than it used to be.”

That was not the only challenge to conventional thinking. Starting in 2011, a year before Sandy, the Bulletin of the American Meteorological Society began publishing an annual state-of-the-science report titled “Attribution of Extreme Weather Events in the Context of Climate Change.” Last year, Heidi Cullen, a chief scientist with Climate Central studying weather variability, wrote that the annual work had the potential to have the same impact on the conversation around weather and global warming as the surgeon general’s 1964 report on smoking and lung cancer.

“Scientists are now able to assess, in some cases within days, whether and how much the risk of such an extreme weather event has changed compared to the past—that is, before heat-trapping greenhouse gases altered our climate,” she wrote in the New York Times.

Even if the science has become more precise in understanding the nuances and connections between climate change and extreme weather, many politicians aren’t listening. EPA Administrator Scott Pruitt has said that to “have any kind of focus on the cause and effect of the storm, versus helping people, or actually facing the effect of the storm, is misplaced.”

GizmoCrazed - January 12, 2018 0
Byton’s electric concept car wowed at CES, and for good reason. The SUV has a lot of strong features, including a max range of 323...

Sphero lays off dozens as it shifts focus to education