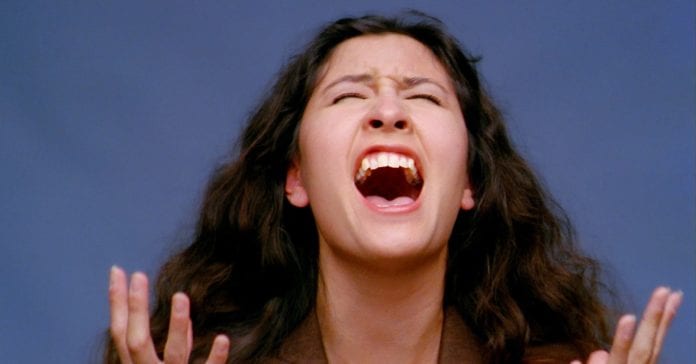 No two screams sound alike. They can swing in pitch, like the The Wilhelm; blare cacophonous, like The Donald Sutherland; or fire off spasmodically, like (my favorite) The Shelley Duvall. Few vocalizations are as nuanced as the fearful shriek. And yet, no matter the cry in question, you always know a scream when you hear one.

So, then. Whence does the scream derive its unmistakeability? “If you ask someone on the street, they’ll tell you a scream is loud and high-pitched,” says David Poeppel, a neuroscientist at New York University and the Max Planck Institute in Frankfurt. “Turns out it’s neither.”

Poeppel would know. In 2015, he and his colleagues set out to distinguish cries of fear from other noises. They began by compiling a database of screams. “We spent many joyful hours scanning the interwebs for weird material from YouTube and movies,” Poeppel says, “but then we also brought people into the lab and had them scream.”

Then came time to dissect their samples. At first, Poeppel, too, suspected that volume and pitch were what made a scream a scream. But when he and his researchers analyzed the auditory properties of the sounds in their database, they found what they actually shared was an acoustic quality called roughness, a measure of the rate at which a sound fluctuates in volume. Normal human speech, for instance (which the researchers also analyzed), varies in loudness four to five times per second; screams, however, waver between 30 and 150 times per second. That means they occupy a unique place in the soundscape of human vocalizations, which may be why they’re so attention-grabbing.

That information in hand, Poeppel had test subjects rank a series of sounds according to how alarming they found them—and the rougher a sound was, the more jarring people regarded it. They found the same to be true of car-, house-, and ambulance-alarms, which share screams’ rough acoustic quality. “There’s something shared by these sounds that hijacks your brain and says: Hey, something’s up,” Poeppel says.

To investigate how that hijacking works, the researchers tracked subjects’ brain activity while they listened to rough and neutral noises inside a functional magnetic resonance imaging scanner. To no one’s surprise, all the sounds caused blood to flow to the auditory cortex. But rough sounds also sent blood rushing to the amygdalae, two small, almond-shaped lumps of grey matter associated with processing emotional reactions like fear. Intriguing, Poeppel says, but it got weirder: “The amygdala’s response wasn’t an on-or-off thing. It was a graded response.” In other words: The rougher the sound, the more activity it produced. The amygdalae, themselves, behaved like little, scream-sensitive sound meters.

The next step is to analyze other types of screams—from irate shouts to cries of ecstasy—and how they affect perception and brain activity. “I’m comparing three positive valences and three negative,” says Planck Institute researcher Natalie Holz, head of this new investigation. “For the negative we of course included fear again, but we’re also comparing it with cries of anger and pain. For the positive, we are looking at screams of achievement, pleasant surprise, and sexual pleasure.”

I asked Holz and Poeppel to keep me posted on their findings. I’ll holler when I hear back.

Why Fermilab is Making A Neutrino Detector 800 Miles Long

How to source hard-to-fill programming positions