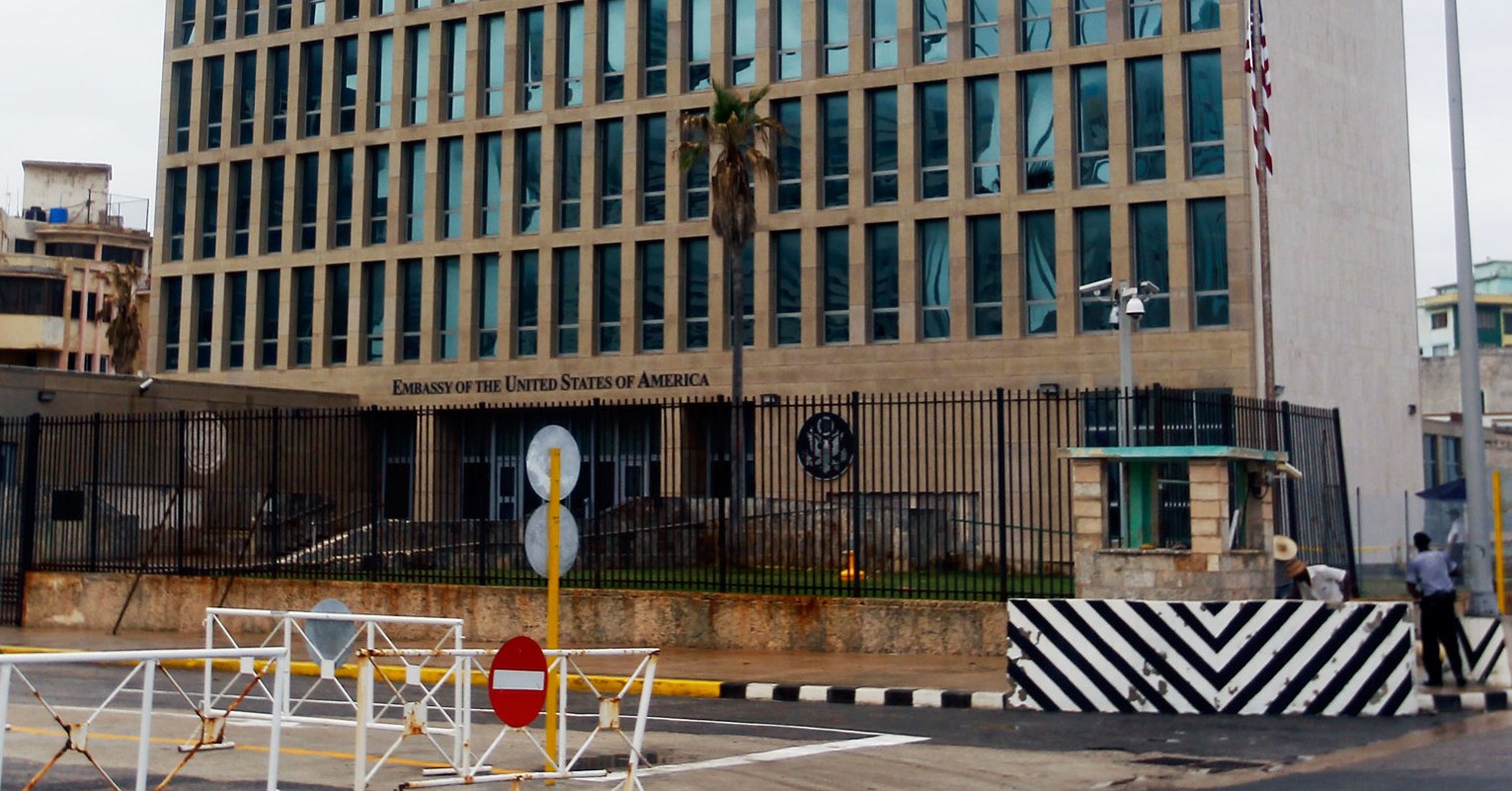 The 007-meets-the-X-Files adventures in Cuba continue. Last week the US Department of State recalled non-emergency personnel and families home from the embassy in Havana, citing injuries and illness among 21 people—“hearing loss, dizziness, headache, fatigue, cognitive issues, and difficulty sleeping” according to a statement from secretary of state Rex Tillerson.

Those 21 people weren’t just cultural attachés. Some of the hardest-hit victims were US intelligence operatives, according to an AP story on Monday. Which is to say: Someone in Cuba has been remotely doing something mysterious to US spies’ ears and brains. Call it spook action, at a distance.

Most of the reporting on this story so far has talked about some kind of a “sonic weapon” or “sonic attack,” maybe a side effect of a surveillance technology. The problem is, physicists and acousticians don’t know how ultrasound (high frequency) or infrasound (low frequency) could do what the State Department says happened to its people. That leaves two possibilities: a new sci-fi sound gun or something else.

Here’s a hypothesis for the something else: poison.

Just to rewind a little bit: The reported injuries vary, from hearing loss (potentially permanent) and dizziness to confusion, headache, and even mild brain trauma. To audiologists and otolaryngologists, that suggests damage or injury in both the inner ear, which converts sound waves into neural impulses and regulates balance, and along neural pathways reaching into the brain. Some of the affected people reported hearing weird noises, sometimes only in specific parts of specific rooms—but others didn’t.

Immediately that suggests some kind of focused acoustic attack. But nobody will admit to knowing about any technologies that can do all that. “Nothing about this story makes any sense to us,” says Robert Putnam, senior marketing director at LRAD, which makes the long-range acoustic device that a cruise ship deployed against pirates in 2005. But the LRAD uses audible—very, very audible—sound. Most of the Cuban attacks seem to have been inaudible. “If it’s infrasound, they’re not really hearing it, and you’d have to pump a tremendous amount of energy into the ground,” Putnam says. “If it’s ultrasound, it attenuates very quickly, and if you pumped a lot of energy into it, it’d heat the skin.”

And technologies that focus a beam of audible sound at a single spot don’t have the kind of range our nominal magic sci-fi sound gun would need—as of 2010 “you had to be within five or 10 feet of the emitter for it to have an effect,” Putnam says. Of course, maybe the magical sci-fi sound gun has made significant technological progress since then.

But sound isn’t the only thing that affects hearing and the brain. Chemicals do, too. It’s called ototoxicity—toxicity to the ear—and it’s a known side effect of, for example, some chemotherapeutics and antibiotics. The widely used cancer drug cisplatin can cause hearing loss, as can the category of antibiotics called aminoglycosides, which includes streptomycin and neomycin. Basically, those drugs get into the fluid-filled ductwork of the inner ear and damage the hair cells, which talk to the nerves that lead to the brain.

Chemotherapeutics and antibiotics need to be administered intravenously to have an effect, though, so they don’t fit the facts. Heavy metals like lead and mercury can be ototoxic, but they also stay in the blood for a long time; the State Department hasn’t released specific test results for its people—maybe it won’t—but it’s safe to assume they got blood tests.

Another class of ototoxins: solvents, like the cleaning product xylene or styrene, used to make glass-reinforced polyesters. Some linger in the blood, but others have a shorter half life. They off-gas from new carpet, paint, and furniture—it’s why some new homes aren’t immediately ready for occupation. “Some of these are going to be obvious. You’re going to smell it,” says Kathleen Campbell, an expert in ototoxicity at Southern Illinois University’s School of Medicine. “But when we study this, it’s usually through industrial exposure. We’re not looking at the possibility that it could be weaponized and have the aroma taken away.”

Finally, though, is an ototoxin that kind of fits the bill. Carbon monoxide causes hearing loss because of its action as an asphyxiant. It kills by displacing oxygen from hemoglobin, the stuff in red blood cells that ferries oxygen around the body. It’s odorless, a gas, and acts centrally—which is to say, it acts on the brain, not just parts of the ear. True, to suffer hearing loss from it, you’d probably have to inhale enough to pass out. But: “It greatly increases the risk of noise-induced hearing loss. It’s synergistic,” Campbell says. “If your oxygen levels go down in the ear and then you have noise exposure, you get a great increase in free radicals, and that attacks the hair cells.”

Synergistic effects are worth looking at here. Hearing loss doesn’t begin or end at the cochlea, the organ in the ear that mechanically turns sound into nerve impulses. Something that affects the central nervous system—like a solvent or carbon monoxide—could also affect the vestibular system, the trio of fluid-filled, semicircular canals that govern balance. And it could affect other parts of the brain as well.

Possibly—though this isn’t well-tested in humans, for good reasons—inaudible infra- and ultrasound could be synergistic with an ototoxin just as industrial factory noise can be. Maybe microwave beams are, too.

The thing is, the Cubans have denied any involvement in whatever these attacks are, if indeed they are attacks. In a briefing, a senior State Department official said the investigation is ongoing.

US officials have reportedly said they’re looking into whether some other country’s operatives were responsible. Like maybe even Russia, which has already been involved in attacks on US news media and voting systems. And Russian security services have long employed poison as a weapon, from the 1978 murder of Bulgarian playwright Georgi Markov with a pellet filled with ricin fired from a trick umbrella to the 2006 killing of the spy Alexander Litvinenko with tea laced with polonium-210.

The Russians have also used microwaves as a surveillance tool. Soviet intelligence beamed microwaves at the US embassy in Moscow for decades, at least for part of that time to send power to passive microphones embedded in a carved Seal of the United States.

Synergistic effects aren’t limited to ototoxins, either. Infrasound—anything below 20 hertz—can be more damaging if it’s accompanied by audible noise. That might not explain the cognitive symptoms that the US personnel experienced, but an audible noise like that reported by some Americans could have provided cover for the infrasound delivery. “Is it plausible that low-frequency sounds could injure the inner ear or create a vestibular phantom, a sense of nausea or motion sickness?” says Robert Jackler, an otolaryngologist at Stanford Medical School. “Yes, absolutely.”

Ultrasound really needs a fluid medium to conduct; that’s why pregnant women get that gel on their abdomens before an ultrasound imaging test. Infrasound delivers through the air, but anyone who’s ever been to a dance club or ridden a helicopter has felt the “vibrotactile” aspect of infrasound—the whomp-whomp feeling in your guts.

It could work as a weapon on people, too. Jackler pointed me to a 2007 study in which researchers exposed chinchillas to infrasound and an audible noise, showing that the two together caused increased damage to the cochlea, specifically by letting cochlear fluids mix together via a rupture. If you really want to get conspiratorial, a team of Russian researchers replicated that work in 2011 in humans, studying soldiers who were working with heavy ground vehicles, helicopters, and hovercraft. The ones exposed to the most infrasound all had more hearing loss, digestive and nervous-system problems, and eye diseases. (The same team in 2017 found that infrasound had a mutagenic effect on mice, so, you know, oy gevalt.)

I emailed one of the researchers who worked on both of those papers, asking if she thought her work might have any relevance to what happened in Cuba. “We do not know anything about such weapons, and we consider this unacceptable,” writes Irina Vasilieva, a biologist at the NN Petrov National Medical Center of Oncology.

How will anyone figure out if any of this is true? Tests, of course. Hearing loss due to medical ototoxicity generally affects higher frequencies first; solvents attack the midrange. Hearing loss from loud noises yields a “noise notch” between 2 and 6 kilohertz. Hair cells give off wee little whistles when functioning normally—otoacoustic emissions—that can test if they’re functioning normally. And then there’s auditory brain-stem testing to see if the damage is central instead of peripheral. “I’ve worked with the Department of Defense on auditory research for a couple decades, and I’ve been very impressed with their capabilities. I’m sure they’re already looking at everything I’ve talked about,” Campbell says. “More and more I suspect there’s some combination rather than one pure effect.”

That combination might not have been intentional. Presumably a magic sound gun could have synergistically combined with environmental noise, or some unknown ototoxin, and caused injuries when it was only supposed to pick up secret conversations. Maybe this isn’t James Bond or The X-Files; maybe it’s Coen Brothers. Perhaps nobody, as hapless bad guys are wont to say, was supposed to get hurt.

The thing is, poisoning people at a distance is really hard to do. “You’ve got to have a consistent dose and a consistent delivery mechanism,” says Edward Boyer, a medical toxicologist at Harvard Medical School. Anything ototoxic enough to cause the range of symptoms in the diplomats would have been toxic in other ways, too, he says. And even the symptoms that the State Department has already made public “imply highly variable pharmacokinetics, which to me says that it wouldn’t be that useful as a toxin. If you can’t incapacitate everybody, what’s the point of using it at all?”

But don’t let that shake your paranoia just yet. “It may be that this was a test case, and they wanted to see how useful it was, whoever unleashed it on us,” Boyer says.

For now, whatever happened to the diplomats and spies in Cuba remains a mystery without enough clues. The experts I talked to emphasized that to do anything more than speculate they’d have to see lab results, neuropsychiatric workups, neuroimaging, environmental history … all results that the State Department hasn’t made public, if indeed the tests happened. And even if State does determine what affected their people in Cuba, it might not say. Sometimes the truth isn’t out there.

Nick - November 16, 2012 0
In this day and age everything is moving to "the cloud." It is used for syncing multiple devices, storing content, and collaborating on projects...

California’s Water Whiplash Is Only Going to Get Worse