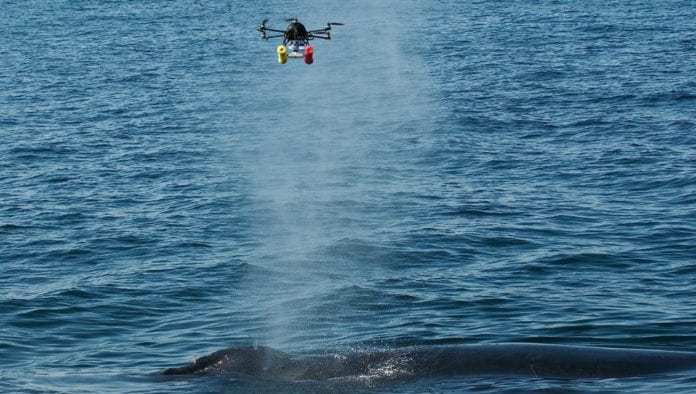 A drone hovers for a few seconds in the whale’s blow to collect a sample.
(Credit: Michael Moore, Woods Hole Oceanographic Institution)

While the SnotBot drone has been highly publicized for its aerial maneuvers over blowholes, but its expeditions have yet to showcase some hard data about whales. But there’s another whale snot-gathering team out there using drones—and they’ve turned those misty explosions into some interesting biological data about whales.

After collecting humpback whale blow—the moist breath you see shoot into the air when a whale exhales—from two healthy populations, scientists found the creatures have a shared blowhole microbiome. The study, conducted by Woods Hole Oceanographic Institution (WHOI), was released Tuesday in mSystems and represents the first study “to produce microbiome data from drone-collected blow,” according to lead author Amy Apprill.

Scientists gathered the blow of 26 whales from two different populations, one in Cape Cod, Massachusetts, and the other in Vancouver Island, Canada. To their surprise, all samples contained the same 25 species of bacteria, demonstrating that the whales have a core microbiome.

To collect the spray, researchers attached a sterilized petri dish to a drone. Flying between 6 and 13 feet above the whales, they swooped the craft down at the opportune moment. Here’s a video of their snot-gathering endeavors. As you’ll hear, communication was key to making sure the drone dove deep into a whale’s moist spray.

According to the study, these findings could help advance the health and disease monitoring of humpbacks and other large whales, and provides a baseline for what a healthy whale’s blow-hole microbiome should look like.

“Whales are critical members of the ocean food web, and human activities are harming them,” Apprill wrote in an email to Discover. “Many species and populations are in decline due to entanglement in fishing gear and vessel collisions, as well as the broader impacts of climate change.”

With the knowledge of what a normal, healthy whale microbiome appears to be, researchers can spot anomalies easier and dig deeper for potential causes. And, of course, drone tech remain an important tool in these endeavors.

“We are continuing the drone microbiome studies on other species of whales, including species and populations with health concerns, including the endangered North Atlantic right whales,” Apprill says.

GizmoCrazed - March 27, 2011 0
As the Spring Season approaches we have another set of wallpapers for your desktop, this time its all about colourful flowers surrounded by beautiful...