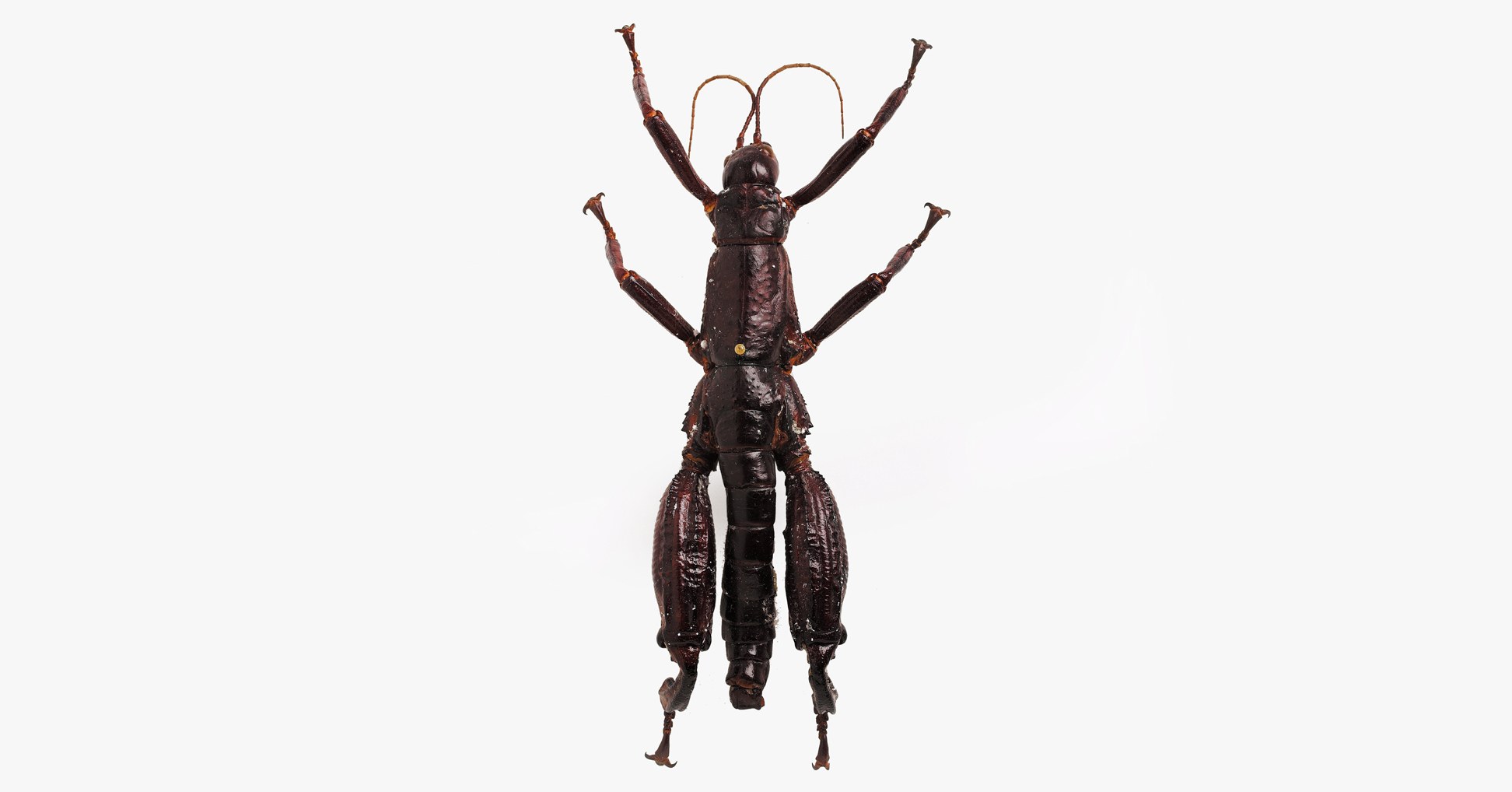 Jutting out of the Pacific Ocean 375 miles off the coast of Australia is Ball’s Pyramid, the most bizarre island on Earth. It is, as promised, shaped like a skinny pyramid, the remnant of a shield volcano. It is decidedly supervillain-lair-ish.

In 2003, scientists scaled its sheer cliffs in search of the only thing more bizarre than the island itself: the Lord Howe Island stick insect, so named because it is, as promised, rather stick-like. It’s also enormous, growing to six inches long, with a dark, robust abdomen and chunky back legs. The researchers managed to bag just two breeding pairs, because Lord Howe Island stick insect was, and remains, one of the rarest critters on the planet.

A century ago, this big ‘ol bug thrived on—you guessed it—Lord Howe Island, a crescent-shaped volcanic remnant 12 miles away from Ball’s Pyramid. But in 1918, an unexpected shipment of invasive rats (they were stowaways on a boat, which shipwrecked) annihilated the arthropods. For decades, the six-legged giants were presumed extinct. But in 2001, a team of scientists found stick insects living on Ball’s Pyramid. But something was amiss.

The Ball’s Pyramid bugs were considerably stockier than ones collected from Lord Howe Island, and the males had bigger spines on their legs. The differences were great enough to raise questions: Was this the Lord Howe Island stick insect living somewhere new, or was it a different species altogether?

To find out, scientists would have to compare the DNA from the descendants of these captured insects with museum specimens from Lord Howe Island. But the DNA in museum specimens has a habit of decaying over time, stymying efforts to sequence it. The technology to do it just didn’t exist back then.

But now it does. Today in the journal Current Biology, researchers announced that they’ve successfully compared the genomes of the two groups of insects to confirm that, yes, even though the bugs look quite different, the divergence in their DNA is actually less than 1 percent. It is, in fact, the Lord Howe Island stick insect camping out on an inhospitable pyramid. That may seem like a semantic squabble to you (who cares what you call the beast?), but it actually has big implications for the planned restoration of Lord Howe Island, and for the very idea of what a species even is.

Now, here’s the neat bit. The researchers also compared the Lord Howe Island museum specimens with one another, and found that the diversion there was about half a percent. “So the diversions within the island are basically of the same magnitude as they are between a Lord Howe Island and Ball’s Pyramid,” says Sasha Mikheyev, an evolutionary biologist at Okinawa Institute of Science and Technology and the study’s lead author.

Why the Ball’s Pyramid population would look different than the extinct population from Lord Howe is still a mystery, though the bigger leg spikes may be used in some kind of sexual competition. Also unclear is how and when the stick insects got to the Pyramid in the first place, though more genetic testing could clarify when the populations began their subtle divergence.

Still: Science says they’re the same species. The problem is, scientists have a hard time agreeing on what exactly a species is in the first place. “The last time I checked, there’s something like 53 different species concepts that are published in the literature and used,” says California Academy of Sciences arachnologist Lauren Esposito, who was not involved in the study.

It used to be that a species was more or less a group of animals that could breed with one another. That gets problematic, though, when you consider that different species can get together and produce offspring. Think about a mule, which is the product of a horse and a donkey. Mules, though, are sterile. So maybe a species is a group of animals that can breed and produce fertile offspring. But ah, a polar bear can breed with a grizzly to create a pizzly, which is fertile. So yeah, it’s a definitional mess.

But now, increasingly powerful genetic testing is precisely quantifying what it means to be a species, instead of biologists eyeballing individuals for shared traits and seeing if they breed. Here, too, museum specimens and their fragile DNA have a role to play. “Luckily for museum scientists, a lot of the methods that are emerging are sequencing really short fragments of DNA,” Esposito says. This study “really for me highlights the value of having historic museum material, and how that material can have unexpected importance in the future.”

The stick bug study could also change the course of the restoration of Lord Howe Island. The rats are still there, doing their destructive thing, but late next year the Australian government will launch a massive eradication effort to rid the island of every last invasive rodent.

The question will then become: Should scientists return the Lord Howe Island stick insect to its namesake island, once the rodents are gone? Sure, today’s bugs look different than the original population, but genetically they’re virtually indistinguishable. That means they may have the right stuff to repopulate the island.

“The Lord Howe Island stick insect is a story of loss, it’s a story of a fragile island habitat being destroyed by an invasive species introduced by humans,” Mikheyev says. “But the stick insect actually gives us a chance to sort of say, well, we can do something. Although we have done tremendous damage to this environment, there are things we can proactively do to make it potentially better and to bring it back. Perhaps not exactly how it was, but to go a step in the direction.”

GizmoCrazed - May 24, 2019 0
Tornadoes are tearing up the Midwest, Airbnb calls truce, and we've got some books for your long weekend. Here's the news you need to...

This Guy Ate Nothing But McDonalds for 10 Days, The Result...