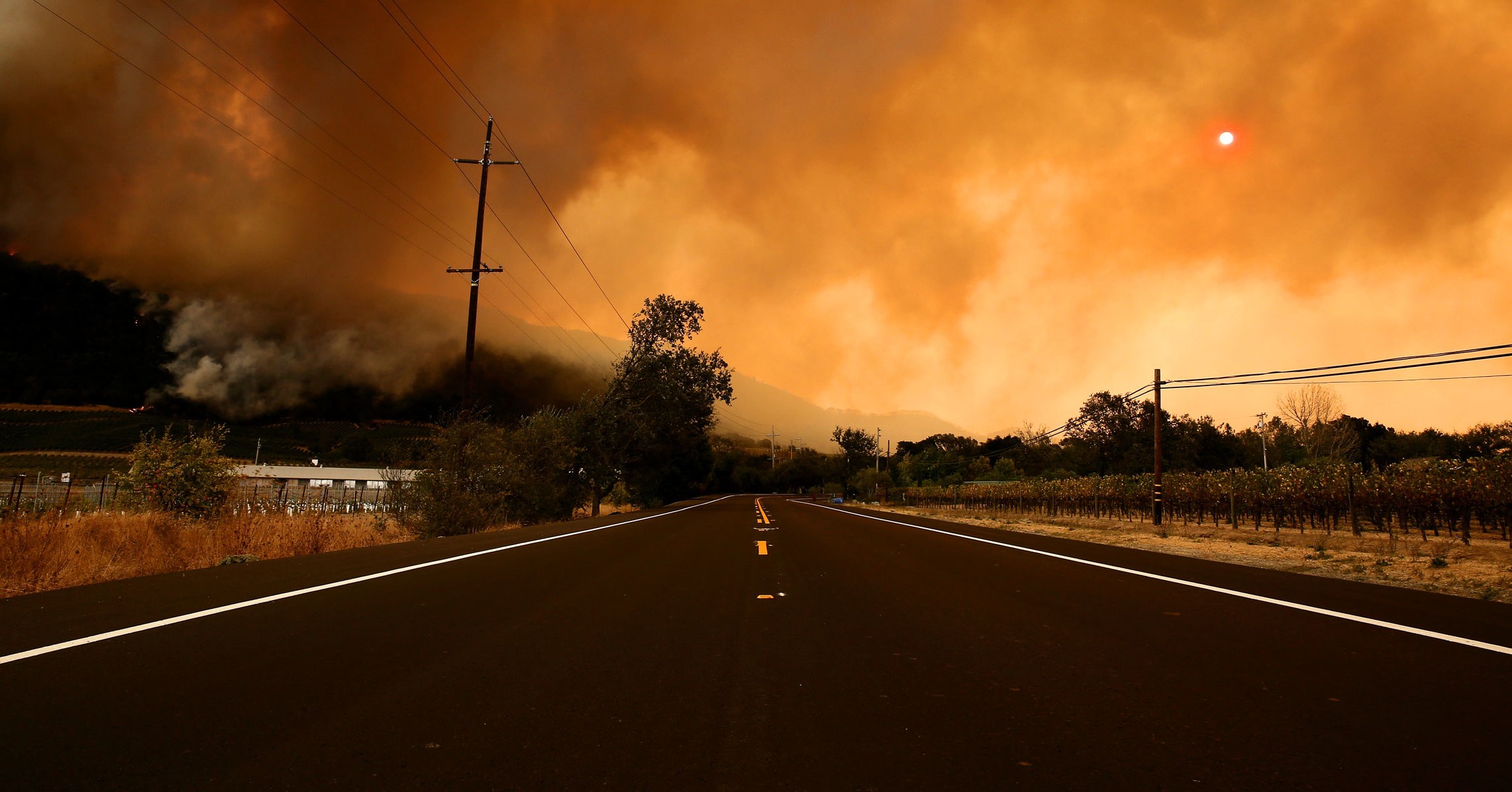 Blame the wind, if you want. In Southern California they call it the Santa Ana; in the north, the Diablos. Every autumn, from 4,000 feet up in the Great Basin deserts of Nevada and Utah, air drops down over the mountains and through the canyons. By the time it gets near the coast it’s hot, dry, and can gust as fast as a hurricane.

Or blame lightning, or carelessness, or downed power lines. No one yet knows the cause of the more than a dozen fires ablaze around California, but fires start where humans meet the wild forests, where people build for solitude or space or beauty. Things go wrong in those liminal spaces, at the interface between the wilds and the built.

So blame sprawl, or civilization’s cycling of wilderness into rural into exurban into suburban—urban agglomerations with an ever-expanding wavefront.

Blame all of it. There’s a reason the great Californian writer Raymond Chandler called it the Red Wind—winds “that come down through the mountain passes and curl your hair and make your nerves jump and your skin itch.” Those winds blast down from the mountains and fan small fires into infernos, and sometimes those infernos maim or kill a city. In 1991 it was in the hills of Oakland. And this past weekend it was Napa and Sonoma, and the town of Santa Rosa. At least 15 people are dead. More than 1,500 houses are gone. The skies of the West are full of dust and ash.

Smoke and water stream through the roof of a home destroyed by fire in Anaheim Hills.

Pushed by the wind, fires can throw burning embers a mile and a half ahead. The fire front starts moving faster than anyone can respond, jumping from ridgeline to ridgeline.

A fire’s progress through the forests and wildlands of North America isn’t exactly formulaic, but scientists understand it reasonably well. In the city, though? “Most wildland firefighters are not trained in structural protection, but the urban fire departments are not trained to deal with dozens or hundreds of houses burning at the same time,” says Volker Radeloff, a forestry researcher at the University of Wisconsin. “When these areas with lots of houses burn, the fires become very unpredictable.”

Buildings, the material bits of cities, don’t burn like woodlands. “A wildfire typically doesn’t last in one spot more than a minute or two. In grass it can be like 10 seconds,” says Mark Finney, a US Forest Service researcher at the Missoula Fire Sciences Laboratory. “But structures can burn for a long time. That means they have a long time to be able to spread the fire, to be able to ignite adjacent structures.” They throw off embers as they decompose, and those wide walls emit and transfer heat.

Fires happen without Santa Anas too, of course, but “they typically don’t grow bigger,” says Yufang Jin, an ecosystem dynamics researcher at UC Davis and lead author on a 2015 paper about the difference. “During summertime in southern California, the typical wind pattern blows from the ocean to inland. The wind speed is usually not that strong, and the relative humidity is usually high.” That can tamp a fire down.

During Santa Ana season, conditions are the opposite. And the particularly bad Diablo winds in the north this year come after the end of a drought that left plenty of fuel. Fire researchers sometimes fight about whether meteorology or fuel conditions are more important to wildfires; this past weekend had both—the perfect firestorm. Cal Fire, the agency responsible for wildfires in the state, has issued another Red Flag Warning for the same conditions later this week. According to a spokesperson, roughly 4,000 firefighters are already deployed.

California housing policies are more likely to push single-family houses out into the edges of communities than encourage the construction of dense city centers. Climate change makes wet seasons wetter and hot seasons hotter—which builds fuel. “Based on analysis using climate model projections, the frequency of Santa Ana events is uncertain,” Jin says. “But all the models agree that the intensity of Santa Ana events is going to be much stronger.”

Models say the same thing about sea level rise and hurricanes. A continent away from the fires in California, cities along the Gulf of Mexico and in the Caribbean have been battered by tropical cyclones, one after the other. This year, ocean water heated by a warming climate, unusually wet weather, and a lack of the vertical wind shear that can tame a big storm combined to produce an anomalous season. It has already been a fire season and a hurricane season that are, as researchers say, consistent with models of a changing climate.

Cities are not immortal. Economics and wars can kill them, but so can storms and fires. That’s especially true if cities aren’t built to resist—if cities are built in ways that make the change worse instead of fighting it.

So keep thinking about blame as northern California rebuilds—if regulations get brave enough to insist on denser cities, less flammable materials, different ornamental vegetation, underground power lines. The risk of fire will never be zero, but everyone knows what would knock a few points off. Whether anyone will make those changes—well, the red wind makes people do crazy things.

Ball valves are the hidden heroes of flow control. What is it and how does a ball valve work? Click here to find out!

Tired of Slow Internet: How to Get High Speed Internet in Rural Areas

Domio just raised $12 million in Series A funding to build...

GizmoCrazed - October 20, 2018 0
Hotels can be pricey, and travelers are often forced to leave their rooms for basic things, like food that doesn’t come from the minibar....

Why It's So Tough to Keep Antibiotics Out of Your Turkey

Ball valves are the hidden heroes of flow control. What is...

Tired of Slow Internet: How to Get High Speed Internet in...

Ball valves are the hidden heroes of flow control. What is...

GizmoCrazed - June 30, 2020 0
We use cookies to ensure that we give you the best experience on our website. If you continue to use this site we will assume that you are happy with it.Ok