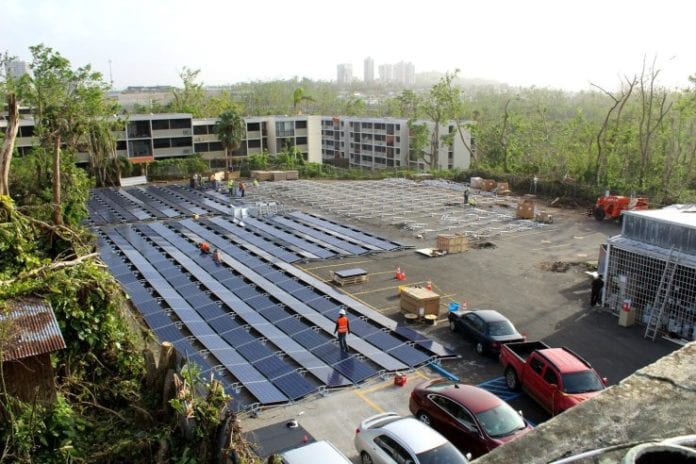 Tesla CEO Elon Musk noted on Twitter that Tesla’s solar team could indeed outfit Puerto Rico with power facilities that could be used to generate and store power reserves when the existing grid isn’t available, as it has been after the U.S. territory faced the devastation of hurricane Maria. Now, Tesla is showing that it’s making good on its promise of help, with significant progress being made on one solar generation/storage facility on the island.

The facility in question will provide power to Hospital del Niño, with a combination of solar cells and Tesla’s Powerpack commercial energy storage batteries. That should mean it can not only generate power from the sun’s rays in times of need, but also store up a reserve that can be used to provide power around the clock and throughout varying weather conditions, even when the sun isn’t shining.

Tesla noted on Twitter that this is just the “first of many solar+storage projects going live,” after the company discussed how it might help with Puerto Rico’s ongoing recovery efforts with PR Governor Ricardo Rossello following an exchange between the Governor and Musk on Twitter. Rossello and Puerto Rican Chief Innovation Officer Glorimar Ripoli proposed turning the territory into a flagship example of what Tesla’s solar technologies can do for the world.

Tesla has also been shipping its home Powerwall battery storage units to the island for help restoring the grid, and Musk himself donated $250,000 of his personal money to support relief efforts. Tesla also postponed its electric semi truck reveal event to November in order to focus on helping establish facilities like this one in Puerto Rico.