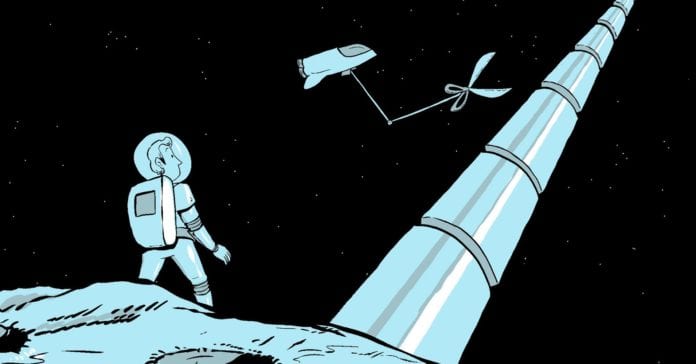 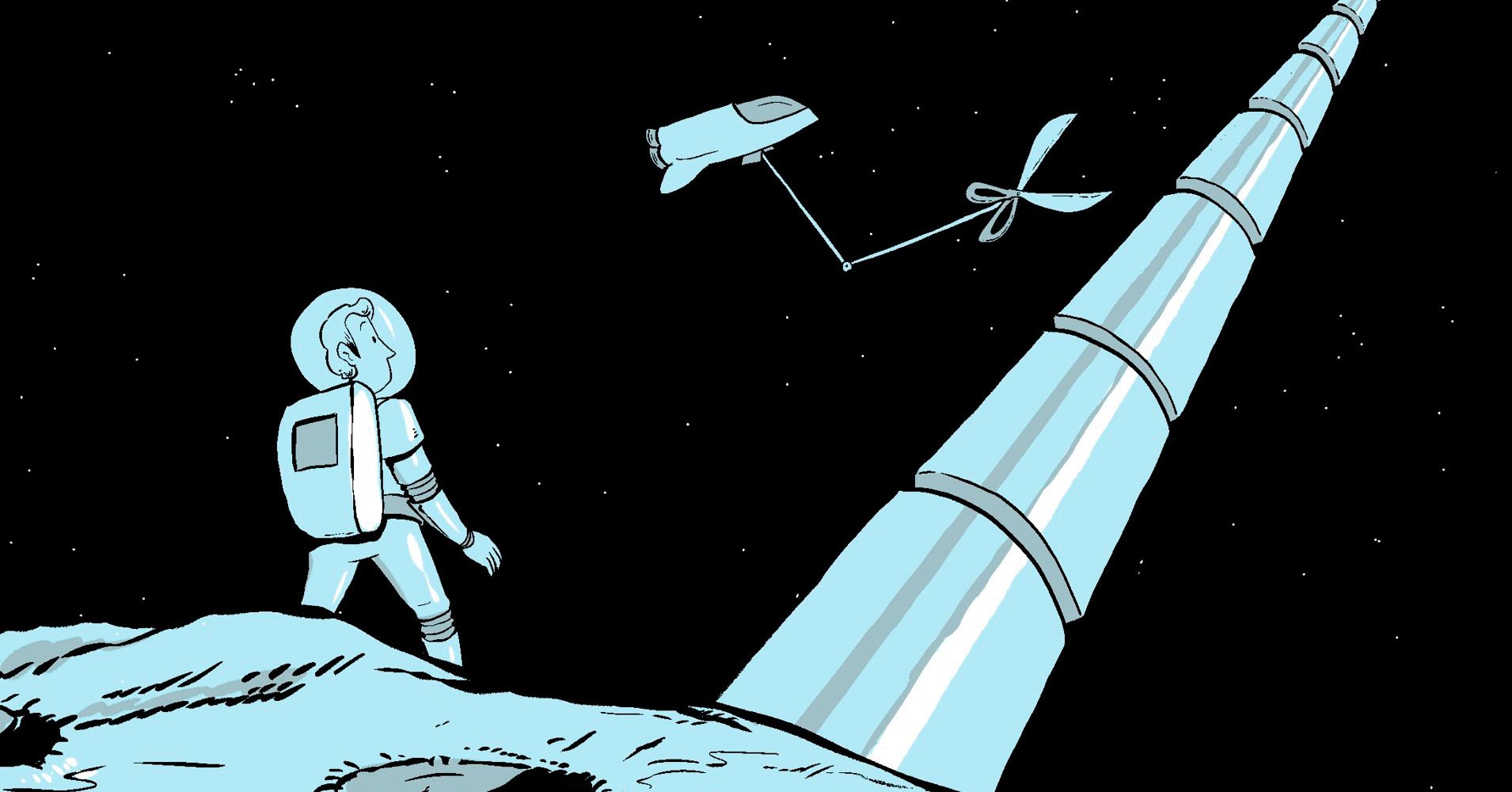 Twenty years ago, WIRED made a bold prediction: Cable modems are on the way out. “Things are looking bad for the cable industry: Careful study has shown that nearly the entire cable network would need to be replaced to make it suitable for two-way data traffic, and satellite services have been stealing away cable’s television customers at an intolerable rate.” Fast-forward to 2017 and … cable modems are everywhere. Hey, points for journalistic confidence.

Listen, predicting the future is thankless and hard and often ill-advised. But if we didn’t look forward, we’d never make progress. To that end, the dynamic duo of scientist Kelly Weinersmith and cartoonist Zach Weinersmith are today releasing the book Soonish: Ten Emerging Technologies That’ll Improve And/Or Ruin Everything, a wild glimpse into a future that may or may not involve space elevators and brain-computer interfaces and programmable matter. In it, they sift through mountains of literature and pick the brains of the researchers at the forefront of things like bioprinting (like 3-D printing, only more bio) and augmented reality (like reality, only more augmented), turning a skeptical yet exuberant eye toward the technologies of tomorrow.

WIRED sat down with the Weinersmiths to talk about their marriage (of comedy writing and science and fantastic comics), the strangest saga of a giant space gun you’ve ever heard, and why you should never trust cookie-wielding robots.

Editor’s note: This conversation has been edited for clarity and length. (And full disclosure: The authors share a publisher with this writer.)

WIRED: Of all the technologies in the world, how did you land on these particular 10?

Zach Weinersmith: It was really important to us that we’re not spreading quackery, that we’re not spreading any kind of pseudoscience. You might imagine with some of these emergent technologies there’s a little bit more concern about that because they’re less established. There was stuff we were interested in, like weather manipulation, and maybe that’s a thing that can be done, but we got into it a little and it didn’t smell great.

Kelly Weinersmith: I think at the end of the day, one of the criteria was just that it was something that we wanted to spend a whole month reading about. There were a bunch of other technologies we could have included but we kind of picked the ones that seemed the most exciting and met those criteria.

WIRED: For me one of the blessings—that’s a stupid word, I never use the word blessings—but one of the great things about journalism is I go to work and I learn all day.

Kelly: When we were reading about asteroid mining it ended up not being anything like what we thought it was going to be. We thought it was all about trying to bring platinum back. And then when we read that that could crash the market, and that probably wasn’t a viable economic choice for trying to get to asteroids. That blew our minds. There’s this whole giant field with many industries and people in academia that is totally about something other than what we thought.

WIRED: The book journeys into the future, yet it’s still grounded in reality. How do you look ahead to these fantastical technologies with skepticism while still retaining a sense of wonder?

Zach: Some of it’s really way out there, like the whole thing about using lasers to use less propellant on a rocket. That’s really out-there stuff. In addition to trying to be honest about it, talking about the ways it might suck and might fail are really interesting because the details, at least for us as turbo dorks, that’s what makes it fun.

Kelly: We try to do a fair job of selling things, because I think it makes the general public not as excited about science when these technologies never come to fruition, and a bunch of money has been spent on them. Or they do come to fruition and then there’s a negative consequence that nobody had talked about, which is actually one of the interesting things we discovered while researching this book. Scientists aren’t really thinking about that when they come up with a new technology. Almost all the scientists, when we asked well how could your technology end up destroying society, either they were holding back or they really hadn’t thought about it. I’d say most of them said, “Oh, I don’t really know.” And I was like, but maybe you should, or maybe you should have had a couple beers and thought about it once.

Zach: One time would be good.

Kelly: At least once.

WIRED: One story that really stuck out for me was the truly insane saga of Gerald Bull’s space gun in the chapter about cheap access to space. What was Gerald’s deal?

Kelly: He was crazy.

Zach: Uh … I mean … that’s something to say, yeah. Well, it’s a little more nuanced than that, but it’s probably true.

The story of Gerald Bull goes like this. You have a brilliant engineer who’s especially good at ballistics at an early age, who had a brilliant career early on where he got funding from Canada and the US to work on these ballistics programs. Then basically the funding dried up. So he kind of did whatever it took to be able to keep working in this area, which led him to do work in weapons dealing, including dealing with then apartheid South Africa. And things basically unraveled from there, resulting in his humiliation and depression and alcoholism.

Then much later in life he was able to get it back together and began working for Saddam Hussein, for reasons that are not well understood, building a giant gun. To be clear, it was probably not useful as a weapon. It was not going to be moveable, it was not pointing at an enemy city, and it was pointing as the Earth turns, which is what you’d want to do if you were shooting into space. Then shortly after that in the early ‘90s he ended up in a Brussels hotel with a bullet and $20,000 on his body and nobody is sure who killed him. I believe his son suspected Mossad, but no one as far as I can find has come forward to say here’s who did it. And even if they did, I don’t know if you’d believe them.

WIRED: At the risk of this going to your heads, this book is significantly funny. But I was curious if you ever get pushback from the old guard for covering science in a fun, somewhat irreverent way.

Kelly: …not too amused at the way we presented particular bits of information. And this wasn’t even necessarily jokes at their expense. And so certainly there is some pushback from the old guard, if you will, but I would say that most of the people that we talked to really enjoyed getting a laugh while learning about it. It was much more common for someone to write back and say, “You know, this was as funny as crap,” is literally what one person said.

WIRED: You probably don’t need me to tell you that we’re living in strange times. What’s it like doing science and writing about science in this political moment?

Kelly: I don’t know how to contextualize the Trump administration and summarize how bad it’s been for science. Certainly a lot of my friends in other fields, they study things like climate change, and that’s particularly demoralizing to see something so important get so overlooked and pushed to the side.

Zach: For me in this weird climate, even in science now, at least among politicians nothing is necessarily true if you decide you don’t want it to be. We would have felt this way anyway, but I guess I took a little more pride in the amount of research we were doing trying to make sure we got everything right. And I guess having a sense of integrity about telling the truth to the best of our ability and admitting where we didn’t know something, or something was hard to understand. The book is in no way a political statement, but you know when times get weird, doing basic decent things becomes a political statement, and that’s incredibly unfortunate.

WIRED: I’ve run out of questions, but is there something that didn’t come up here that you wanted to talk about that I missed?

Zach: Is there something goofy? I always want to work in the thing about how robots are going to kill us because we’re stupid about cookies.

Kelly: So an undergrad at Harvard named Serena Booth noted that no one is supposed to get into the undergraduate dorm. She created a robot called Gaia that she operated remotely, and she would have it come up to lone individuals and groups and she would have the robot ask them to permit the robot into the dorms. If she asked an individual, they weren’t very likely to let the robot in, but if it was a group, something like 71 percent of the time they said sure, you can come on into the dorms. So they let this potentially bomb-wielding mystery robot into the dorms.

And then she thought, What if I make it look like the robot is delivering cookies? How does that change things? So she added a box from a fancy cookie store that actually had crappy grocery story snickerdoodles in it. When the robot with the cookies asked for permission to get in, almost overwhelmingly it was allowed access to the building. The lesson here is that if a robot comes bearing cookies, you’re probably going to say yes, but you really should have overthought it.