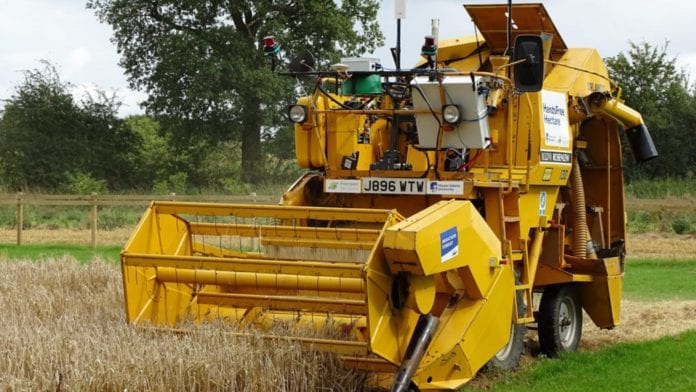 Is there anything more quintessentially American than a farmer in the heartland, toiling away on their land? But this vision of agrarian life will fade into the dusty shelves of sentimental nostalgia, because agriculture is poised to become an industry ruled by robot laborers. Companies like Hands Free Hectare (HFHa) are leading the way.

After a year of work, the HFHa project successfully harvested a crop of spring barley, grown using only autonomous machine labor. Members of the Harper Adams University engineering staff and precision agriculture company Precision Decisions partnered on the HFHa project. Though many farmers are already using satellite-guided equipment to assist in the harvest, the initiative aimed to be the first in the world to farm a crop with a single person developing callouses.

No Hands … Or Feet

The team modified an Iseki tractor and a Sampo combine to include a custom automation system. All of the systems working the field sent feedback to a central mission control system, allowing for real-time human monitoring. While the machines themselves operated independently, many important decisions were still in the hands of humans. The HFHa team regularly met and consulted with an agronomist to help make important decisions, altering the robots’ plans accordingly.

Total in-field autonomy wasn’t the only goal. Another major tenet of the project was precision agriculture, or the using tools to collect observations and measurements to determine how to maintain crops within a field. Precision agriculture allows for specific, tailored treatment plans for a variety of needs based on a wealth of data.

For example, drones with automated flight patterns can capture aerial snapshots of a field. Those images are then analyzed to determine which areas might require additional fertilizers, nitrogen or watering. The HFHa team used a drone to capture multispectral images for such an analysis, along with what it calls a “robotic scout” to collect plant and soil samples from different parts of the field for in-lab testing and examination.

Precision agriculture, combined with the efficiency of automation, presents a compelling answer to the question of feeding a growing population. But the technology isn’t there yet—the entirety of the HFHa project cost £200,000 (about $265,000) for a yield of 4.5 tons. That’s about $265 per bushel for its barley, which typically costs roughly $4 to $5.

Despite the less-than-optimal returns, the best thing to do after a successful harvest is kick back with a beer and appreciate your bounty. Appropriately, HFHa’s team hopes to use the autonomously farmed barley to make their own brew, perfect for a celebratory drink.

GizmoCrazed - December 6, 2017 0
Foursquare’s VP of business development Mike Harkey, who has been with the company for more than five years, has left to join Google as...

How Mantis Shrimp Punch So Hard