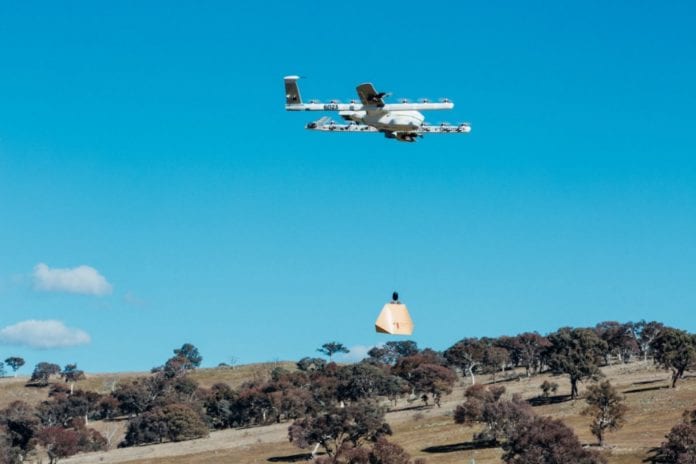 If you get food cravings or need to grab some over-the-counter medicine, chances are that you live just a short walk or drive away from a convenience store or pharmacy as long as you live in a city or the suburbs. But the Aussie residents of a certain rural community face a 40-minute round trip in the car whenever they want to pick up some ingredients for dinner or even grab a cup of coffee. That situation made them the ideal first customers for backyard drone deliveries through Project Wing, a delivery drone effort under Google’s parent company Alphabet.

Since the fall of 2017, this Australian test group of “young families, busy professionals and retirees” has been helping Project Wing figure out the best ways for drones to deliver directly to customers’ homes, said James Ryan Burgess, co-lead of Project Wing, in an Oct. 16 blog post on Medium. That’s a very different challenge from what Project Wing tackled in early 2016 with delivery drones making burrito drop-offs to customers standing in open fields on the Virginia Tech campus. And so Project Wing has continually improved the design of its hover-capable, fixed-wing delivery drones to meet the needs of potential customers who want fresh meals or medicine delivered quickly to almost their doorsteps.

No commercial delivery drone operations currently offer such home delivery services because of the challenges in identifying safe spots for delivery and making the drop-offs without having unpleasant encounters with tree branches, power lines or perhaps the neighbor’s dog. Beyond ensuring the drones themselves don’t collide or crash, the delivery drone services must also ensure that the humans or animals on the ground do not have accidents involving the many spinning rotor blades of multi-rotor drones.

Project Wing’s approach to ensuring safe separation of distance between drones and humans involves not landing the delivery drone at all. Instead, the Project Wing drones hover about 16 feet above the ground and lower their packages to the ground using a cable and winch. The package disconnects from the cable once it reaches the ground, allowing the drone to retract the cable and fly off. That clears the way for human testers on the ground, such as the Australian residents, to retrieve their packages.

Like other delivery drone initiatives, Project Wing aims for its delivery drones to operate autonomously without direct human flight control or guidance. That helps ensure lower operating costs without the need to employ more human operators or supervisors on the ground. But it’s also a challenge for the artificial intelligence behind drones to automatically navigate to a given home address and find a safe spot for delivery without any human help. For that reason, Project Wing’s Australian tests may occasionally require a “manual override” from watchful human engineers, Dennet says.

The current limitations on drone AI being able to adapt to changing circumstances within a delivery area has led some delivery drone operations to focus on making deliveries along fixed flight routes between specific points. In September 2017, the Israeli startup Flytrex launched a commercial delivery drone operation along a specific route connecting two points in the Icelandic capital of Reykjavik. Flytrex envisions moving toward the idea of home deliveries, like Project Wing, by expanding to making deliveries to certain residential neighborhood corners.

Grander visions of drones someday making safe and convenient deliveries to residents of high-rise apartments in densely-packed cities poses even greater safety and logistical challenges. That is why early delivery drone testing by Alphabet’s Project Wing, Amazon’s Prime Air and various startups have focused on rural areas or suburban neighborhoods. In this Australian case, the Project Wing testing ground is located on the border of the Australian Capital Territory–home to the Australian capital of Canberra–and the larger state of New South Wales that encompasses the Australian Capital Territory. 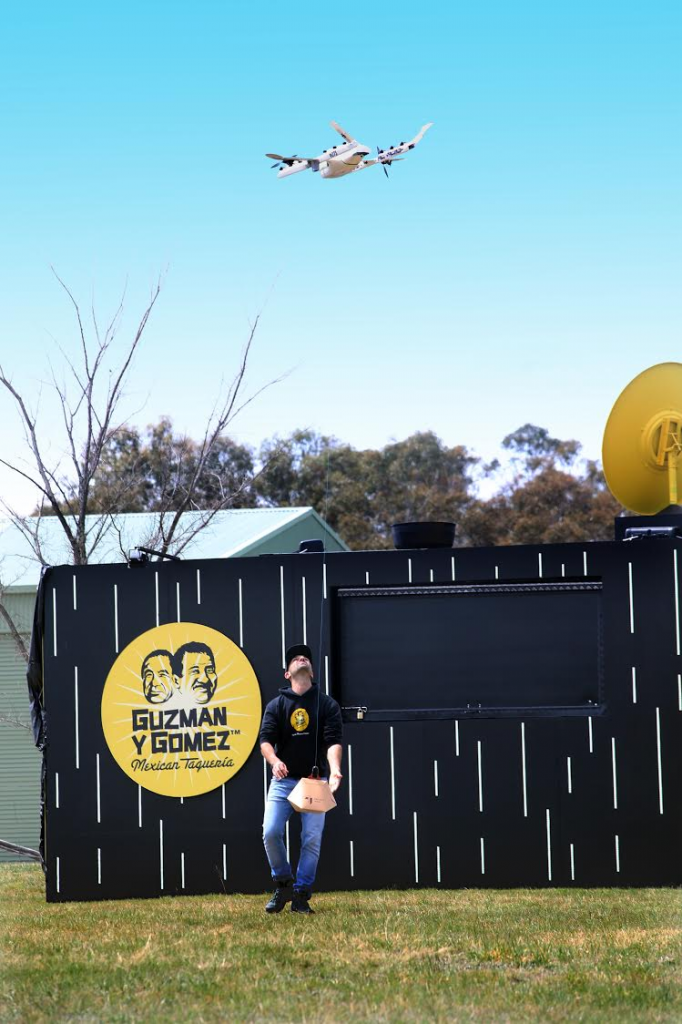 A Guzman y Gomez employee walks outside the kitchen to load a package containing a burrito onto a hook that is winched up by the Wing delivery drone. Credit: Project Wing

The Project Wing efforts in Australia recently expanded to include new delivery partners in the form of Guzman y Gomez, a Tex-Mex restaurant chain, and Chemist Warehouse, a retail pharmacy chain. But Project Wing has also been working with the Australian Capital Territory Rural Fire Service to see if its delivery drones can perhaps help provide drinking water, food, medical supplies or mechanical parts to emergency service workers.

Still, Project Wing has not been alone in testing out delivery drone services down under. Last year, the delivery drone startup Flirtey announced the first trail runs of making deliveries of Domino’s pizzas to homes in New Zealand. Flirtey originally got its start as a delivery drone business in Australia and New Zealand, before relocating its center of business operations to Reno, Nevada in the United States. But the startup seems eager to give Project Wing and other competitors a run for their money in showing how delivery drones could go beyond delivering hot food quickly and perhaps even help save human lives.