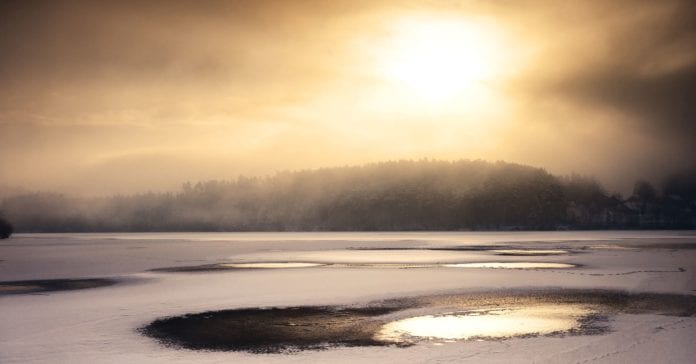 This year, government scientists at the National Oceanic and Atmospheric Administration are placing their bets on a warmer-than-average winter. In the East and southern two-thirds of the country, temperatures will be higher than normal, while Southern California, Texas, and Florida will be drier than usual.

At first glance, this pattern looks a lot like the past two years: 2015’s record-breaking winter was followed by a season that ranked sixth warmest since record-keeping began in 1890. So do three warm winters in a row mean the planet is warming faster, or is the trend just part of normal seasonal variability?

NOAA climate scientists incorporate heat-trapping carbon dioxide levels when they run the models that produce their seasonal climate predictions (these ones came out on Thursday, October 19). But they note that there are other global forces that have a bigger impact on their winter prediction—namely the poorly-understood El Niño and La Niña phenomena. “These forecasts deal with climate variability at a far larger extent than climate change,” says Mike Halpert, deputy director of NOAA’s Climate Prediction Center. “There is a lot of natural climate variability in the system that can trump any kind of background signal.”

Halpert said that a build-up of cool water along the eastern Pacific Ocean—the pattern called La Niña—has big effects on North America’s winter weather. “Conditions across the tropical Pacific are similar to those observed last year,” Halpert said during a press call. “We are dancing on the edge of La Niña.”

For now, NOAA has issued a “La Niña watch” that might be kicked up to a warning next month, Halpert says. The twin sister of El Niño, La Niña is a complex series of events that occurs when wind patterns shift and warmer water pools in the eastern Pacific every two to seven years. During 2015’s record-setting warm winter, climate scientists believe El Niño was responsible for 8 to 10 percent of that winter’s warming.

Which isn’t to say that climate change doesn’t impact overall weather trends. Some of the effects are indirect: One study in 2014 concluded that so-called strong El Niño events may become more frequent under future climate change scenarios. And climate change has perhaps a stronger effect on the frequency of severe weather events, like Hurricane Katrina or Superstorm Sandy.

But don’t expect this year’s spate of hurricanes or an anecdotally warm winter to change beliefs when it comes to climate change. “We find that the direct experience of extreme weather shows a small signal above the noise in terms of people connecting the dots between extreme weather and climate change,” says Anthony Leiserowitz, senior research scientist and director of the Yale Program on Climate Change Communication. “It’s stronger for heat waves and floods than other events. But it’s small and dwarfed by other factors such as politics.”

Still, there may be signs of a thaw, at least the beginnings of one. A group of 50 Republican and Democrat members of Congress formed the “Climate Solutions Caucus” earlier this year to discuss impacts of coastal flooding and sea level rise. These are climate effects that hit both parties congressional districts. This unlikely bipartisan group stuck together last summer to kill legislation that would have banned the Pentagon from releasing a report on the effects of climate change on military installations.

Leiserowitz predicts a slow gradual shift in public opinion on climate change as people continue to connect the dots between their own experiences and what scientists have been saying for several years. “We don’t just experience a hurricane or drought and say ‘Bing, climate change,’” Leiserowitz says. “The links have to be interpreted by people. It can come from lots of different places, some through their experiences, or watching one extreme weather event after another. Not all extreme events can be linked to climate change, but many can be.”