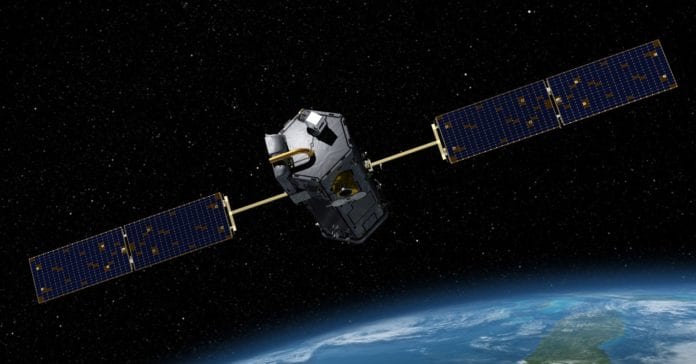 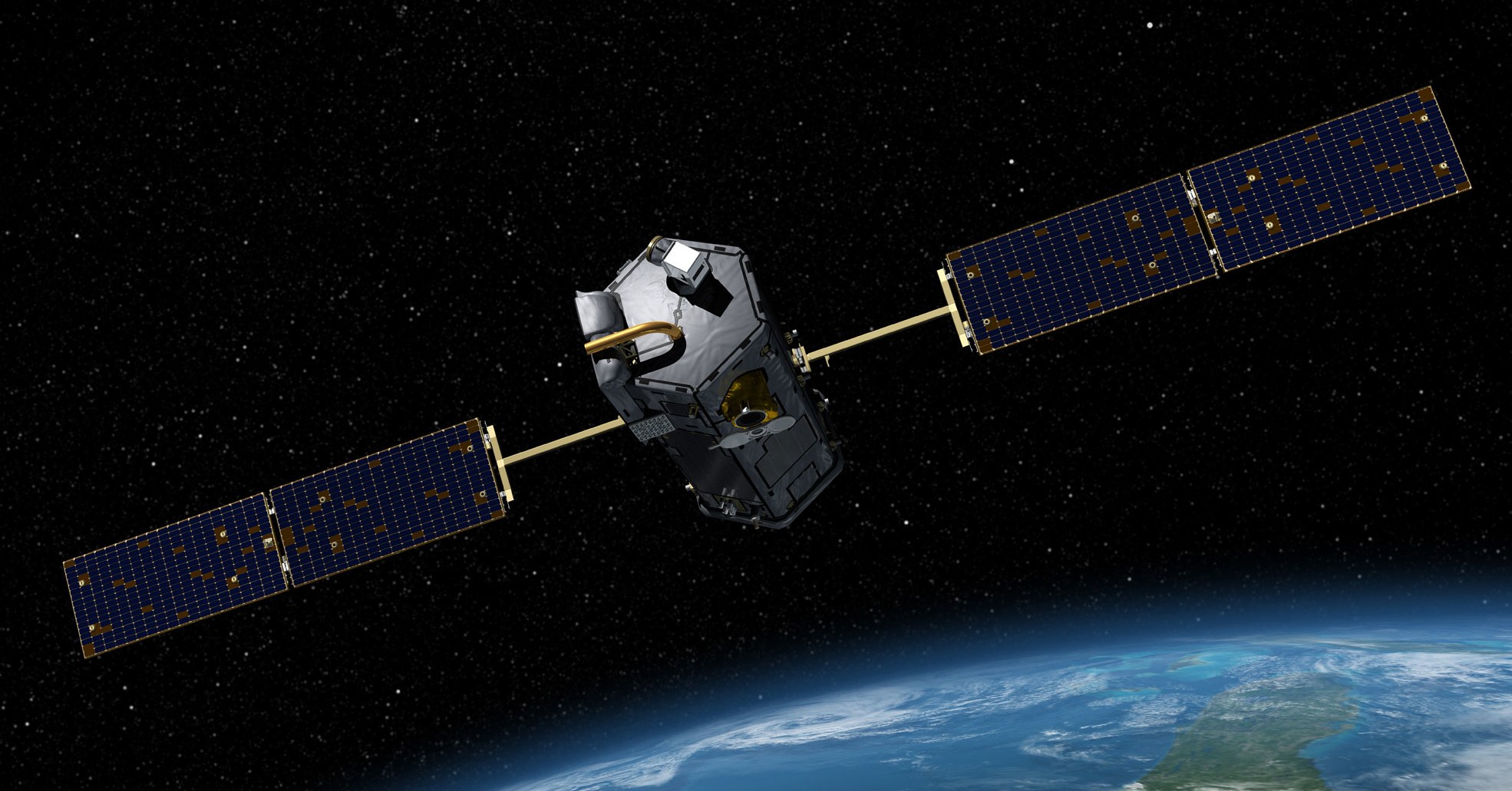 This much scientists know: Humans pump about 40 billion tons of CO2 into the atmosphere every year. Less clear is where the planet puts it.

About half of it stays in the air, where it adds to the annual, two- to three-part-per-million increase in atmospheric CO2 concentration and the gradual warming of the planet. The other half is hoovered up by the planet’s carbon sinks—oceans and plants—in roughly equal quantities, slowing its accumulation in the atmosphere. But the rate of carbon dioxide removal, especially by vegetation, varies a lot from year to year. What’s more, nobody’s certain where or how this reuptake is happening, let alone when the globe’s carbon sinks will overflow.

That’s because existing carbon-monitoring methods are predominantly ground-based—and in shockingly short supply. Some 150 of them dot the Earth, sniffing the air and reporting the carbon content of the local firmament. But to study how land and ocean sinks vary on a global scale, from season to season? There just aren’t enough.

“They’re very precise, but there’s very few of them,” says Annmarie Eldering, an environmental engineer at NASA’s Jet Propulsion Laboratory. “If you want to understand how the continent of Africa or the Pacific Ocean relate to the global carbon cycle, that data set isn’t very sensitive.” For decades, climate scientists have been studying the carbon cycle from the ground, when what they really needed was a 30,000-foot view.

An artist’s rendition of what the OCO-2 spacecraft sees.

In July 2014, NASA placed its first and only CO2-monitoring spacecraft into Earth’s orbit, some 435 miles above the planet’s surface. Dubbed the Orbiting Carbon Observatory 2 (OCO-1 died in 2009, when it failed to launch and crashed into the ocean near Antarctica), it’s spent the last three years lapping the globe in a sun-synchronous orbit, collecting millions of measurements per month.

But OCO-2 doesn’t measure CO2 directly. Rather, it measures wavelengths of sunlight reflected off the Earth’s surface. The relative intensity of those wavelengths indicate how much CO2 the sunlight passes through in the column of air separating the satellite from the ground below.

Every 16 days, NASA assembles these measurements into a map of sorts—a global carbon snapshot that helps researchers understand how Earth’s carbon sinks respond to seasonal shifts, human CO2 emissions, and major climate events. “It’s a lot more data than has ever been collected,” says Eldering, who serves as OCO-2’s deputy project scientist. “And the fun is in the details of the data.”

Those details are the subject of several studies published in this week’s issue of Science. Taken together, they demonstrate OCO-2’s abilities by filling important gaps in scientists’ understanding of how carbon shifts between the Earth, the sky, and the sea—and why it moves the way it does.

In this visualization, reds and yellows depict regions of higher than average CO2, while blues show regions lower than average. Atmospheric CO2 levels plummet during spring and explode in the winter before peaking in April, when decomposing plants and humanity’s fuel emissions drive atmospheric carbon levels to their annual maximum.

One study reveals a dramatic ebb and flow in the Northern Hemisphere’s carbon cycle: Atmospheric CO2 levels plummet during spring and explode in the winter before peaking in April, when decomposing plants and humanity’s fuel emissions drive atmospheric carbon levels to their annual maximum. A different investigation showcases OCO-2’s ability to track carbon emissions from individual cities and volcanoes. Yet another study demonstrates the spacecraft’s ability to not only detect the faint fluorescent glow emitted by photosynthesizing plants, but use those measurements to infer, from hundreds of miles overhead, the amount of carbon being consumed by vegetation down on Earth.

But the most impressive study illuminates the impact of a powerful El Niño event on the global carbon cycle—and how rising temperatures could push the planet’s carbon sinks to their limits.

The 2014–2016 El Niño event was among the strongest in history (Nature, the august scientific journal, referred to it as “Godzilla”), which meant the world’s tropical regions were less wet and a lot hotter than usual. It also coincided with the highest rate of atmospheric CO2 increase ever recorded.

“El Niño provided a very big signal,” Eldering says. Much of the world experienced that signal in the form of calamitous weather. But for OCO-2? “It was this great natural experiment where we had heat and drought outside the normal range, and we could study how the carbon system responded,” Eldering says. It also let her team peer into the future: Many climate models suggest the world will be warmer and drier at the end of the century than it is today. The conditions precipitated by El Niño served as a dry run.

The event’s role in the 2015 carbon spike appears to have been enormous. A study led by JPL climatologist Junjie Liu combined data from OCO-2 and other Earth-observing satellites to show that 80 percent of the record rise in atmospheric CO2 levels could be attributed to tropical regions of South America, Africa, and Asia releasing more carbon than usual. Together these areas unloaded about 2.5-gigatons more carbon into the atmosphere in 2015 than in 2011—nearly one quarter the amount humans typically emit in a year.

More importantly, though, Liu and her colleagues showed that the processes driving this carbon flux varied from continent to continent. In Asia, the principal drivers were massive fires. In South America it was a lack of rain. And Africa? The continent actually saw typical plant growth but hotter than usual temperatures, which accelerated the decomposition of plant matter and the release of CO2.

Those last two cases carry grave implications for the future of Earth’s carbon sinks: The anomalous heat and drought that the researchers observed in Africa and South America are expected to be commonplace by the end of this century. If these regions react in 2100 the way they did in 2015, more of the carbon emissions humans expel into the atmosphere will stay in the atmosphere.

The OCO-2 studies clarify how carbon’s movement between Earth’s tropics and the atmosphere varies, depending on the region you’re looking at. That kind of nuance will be a boon to climate research. “It’s really impressive,” says Josep Canadell, director of the Global Carbon Project. “It produces a novel, complex picture of the processes behind changes in global CO2 levels. To me, it signals the beginning of a new era of carbon cycle sciences and the study of the Earth’s carbon sources and sinks.”

Not that there isn’t a need for more tools. Remember: OCO-2 detects CO2 indirectly, by measuring light; unlike ground-based measurements, you can’t test its accuracy by comparing its readings to known quantities of gas. “This is my hobby horse, but the Achilles heel of the whole carbon-tracking endeavor has been an underinvestment in calibrated measurements,” says Pieter Tans, director of NOAA’s Carbon Cycle Greenhouse Gases Group. Remote sensing satellites like OCO-2 offer climatologists a valuable but insufficient vantage point, he says; a comprehensive monitoring network will require more greenhouse gas sensors—not just on the ground, but in the sky. Tans envisions a scenario in which hundreds of commercial airplanes equipped with sensors produce a dense vertical profile of atmospheric gasses. A fleet of high-altitude balloons could collect measurements, as well.

All of which, of course, will require money—a disquieting reality in light of the Trump administration’s proposed cuts to science funding and abandonment of Obama-era climate policies. “Obviously I’m worried about budgets,” Tans says. “Climate research is a scientific need, but what can I do? Leave the US? Do I have to go to Europe to get science done?”

Perhaps. But then, many of today’s most important scientific findings are the product of collaborative, multinational efforts—and the OCO-2 mission is no exception. NASA’s CO2-monitoring spacecraft is but one in a constellation of Earth-observing satellites known in climate circles as the A-Train. “We’ve benefitted from the fact that cooperation across the world manifests in this constellation, and that we can use these satellites together,” Eldering says. “If you want to pull things apart—did fire cause this or did heat and drought cause that—you have to look at as many pieces of information as possible.”

This much scientists know: Humans pump about 40 billion tons of CO2 into the atmosphere every year. To trace its course through the earth, air, and oceans, they’ll need all the sensors, all the satellites, and all the help they can get.