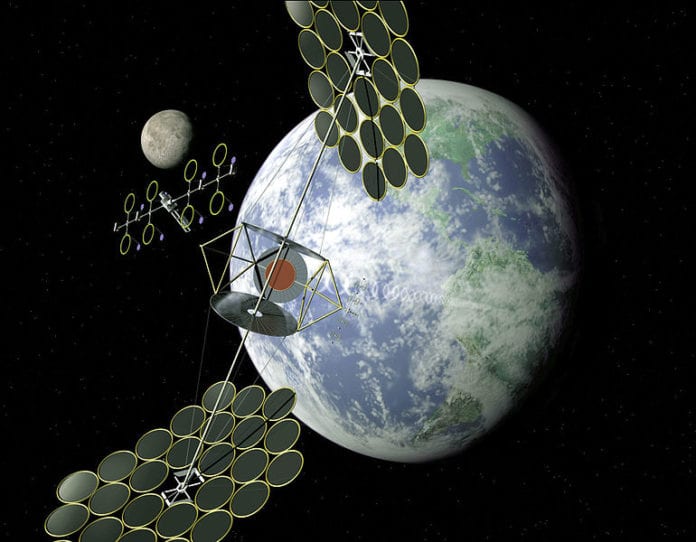 Harnessing the sun’s energy with orbital space power stations and beaming the power to Earth has been a science fiction dream ever since Isaac Asimov wrote a 1941 short story called “Reason.” But the idea has never quite gotten off the ground despite decades of intermittent interest and research for the United States and other countries. NASA hopes to keep the idea going by funding a one-year study of how much it would cost to make commercially viable space-based solar power into a reality.

The new space solar power study by the Colorado School of Mines in Golden, Colorado is one of five research projects chosen by NASA to examine new opportunities for commercial development in space. In this case, the research will consider the government regulations and private investments needed to establish space solar power stations that could beam power to Earth-based collecting stations. But it will also examine how space solar power could support robotic mining operations on the moon or asteroids–a stepping stone toward enabling long-term human space exploration and possible colonization of the solar system beyond Earth.

“It’s one thing to model this out and say this is what we think will be the cost,” said Ian Lange, director of the Mineral and Energy Economics Program at the Colorado School of Mines, in a press release. “It’s another thing to say how are people going to purchase this, how are we going to ensure costs don’t run out of control, how are we going to market this or sell this to some kind of bank or venture capital fund.”

One huge challenge for getting space solar power off the ground is literally about the cost of launching all those components into space. Launching anything into space still costs thousands of U.S. dollars per pound on today’s rockets. But that could change with the rise of commercial spaceflight companies such as Elon Musk’s SpaceX and Jeff Bezos’ Blue Origin that are focused on developing reusable rockets capable of launching payloads for much less.

“It’s a lot of money to put one of these things up in space,” Lange said. “You need more than a model that says nuclear power is 15 cents per kilowatt hour and this is 14.”

There would be many potential applications both in space and on Earth if the launch costs and other related expenses for space solar power can eventually come down, Lange said. NASA and commercial interests in remote asteroid mining operations could be one effort that would benefit from space solar power. Another potential customer could be the U.S. military, given the military’s current need to sustain logistical supply lines of fuel to troops deployed in either war zones or in disaster relief scenarios.

MORE ABOUT: energy, Isaac Asimov, NASA, solar satellites, solar system, space exploration, space solar power, space solar power plants, space solar power stations, space-based solar power, sun energy
© Newspaper WordPress Theme by TagDiv
We use cookies on our website to give you the most relevant experience by remembering your preferences and repeat visits. By clicking “Accept”, you consent to the use of ALL the cookies.
Cookie settingsACCEPT
Privacy & Cookies Policy