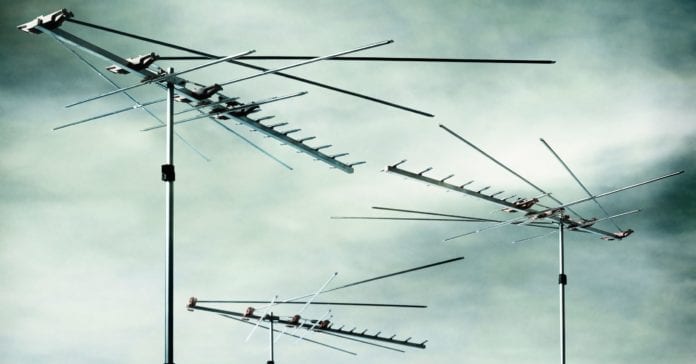 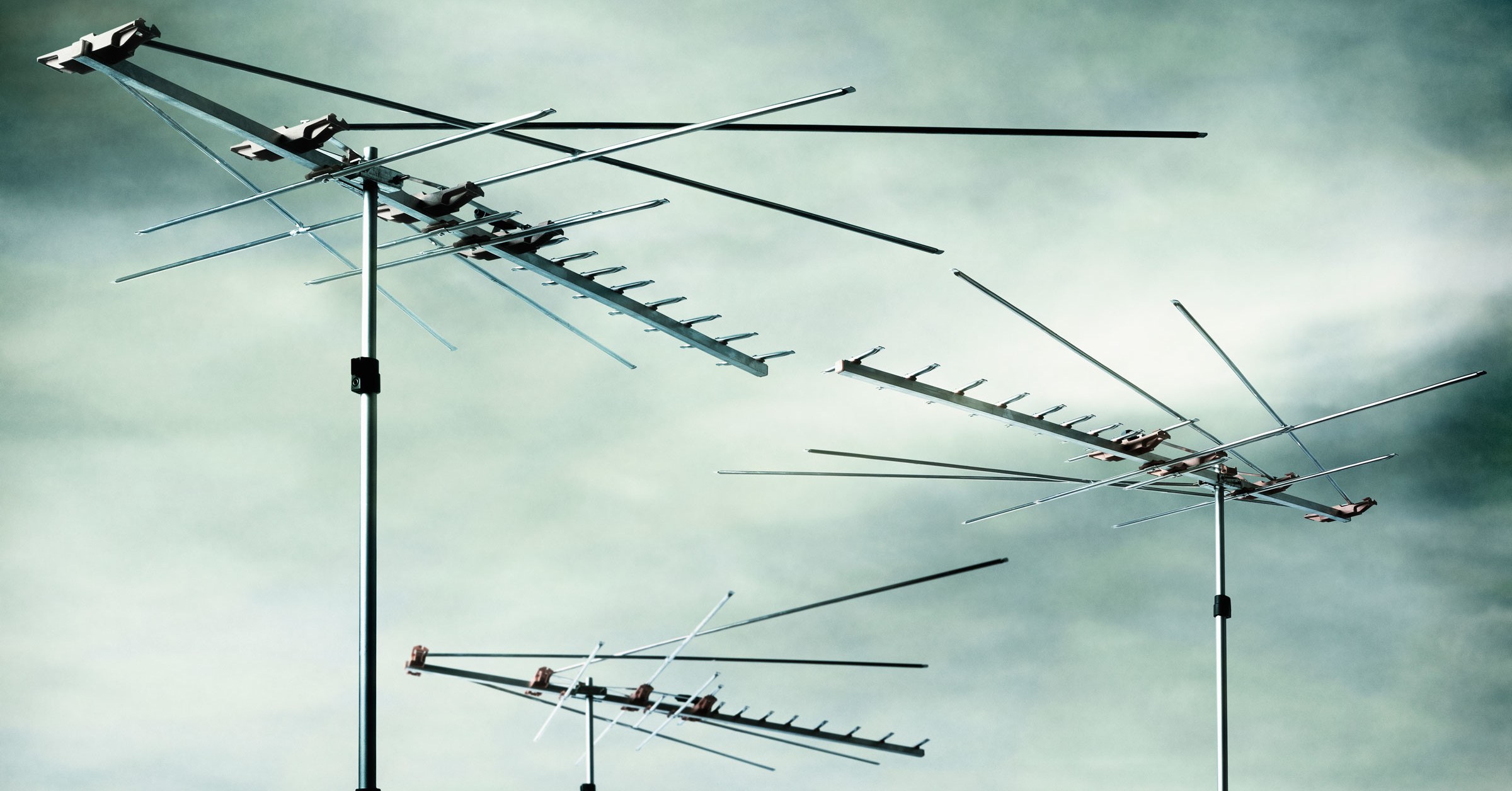 Every 95 minutes, the Chinese satellite Zhuhai-1 02 makes a full pass around the planet, its solar-panel arms extending from its boxy body as it observes Earth. Sometimes, its path takes it over Pueblo, Colorado. There, more than 300 miles below, Mike Coletta’s receiving station can pick up Zhuhai’s transmissions. Because as sophisticated as space technology is, the terrestrial tech necessary to make contact with celestial satellites is surprisingly low. Coletta just has four TV antennas—the kind that look like 2-D pine trees—each pointed in a cardinal direction. They’re bolted into place along garage beams, a patio post, and the rooftop of his house.

Inside his home office, on Tuesday, Coletta waits for Zhuhai’s signals to appear. He sits in front of a laptop and an iPad, a big shelved monitor hovering above. Coletta has, since 2012, spent his free time eavesdropping on the sky, picking up satellite signals—signals that, for the most part, were never meant for him. He’s listened in with an antenna made of coat-hangers and moulding. He’s done it with a rabbit-ear antenna, and with wire taped to yard-sticks. And now, he primarily does it with his quartet of TV antennas—the fanciest setup he’s ever had, and still a steal at around $300.

Turning to the iPad, he watches an icon that shows Zhuhai’s path across a digital globe. It hops its way in discrete digital steps across a red ellipse that delineates his antenna’s field of view. He fiddles with the laptop’s settings, adjusting the displayed frequency range and the volume. Soon, a staccato leitmotif comes from the speakers, accompanied by little line segments on the screen—the kinds of data he sonifies, then posts to Twitter and, in earlier days, to his website www.gosatwatch.com, like little space symphonies. This signal looks and sounds like Morse code.

“That’s the beacon,” he explains.

But soon the signal has faded out, as Zhuhai-1 02 passes beyond the domain of Coletta’s detector. He looks over and smiles from inside his beard, then looks back down to see whether another sat might soon pass over.

Coletta is exactly the person you’d expect to build a satellite detector out of Walmart parts. He’s worked on space launches and missile warnings, systems that track stuff with big radar systems and radio dishes. He’s worked support for Cheyenne Mountain, that impenetrable cave-city for space surveillance. And in his off-hours, he was a HAM radio guy.

While lots of hamateurs are in it for the conversation, Coletta was never so keen on “talking to a bunch of people who talk about their radios all the time.” He mostly wanted to see how far away he could broadcast and receive. So when he discovered he could receive signals from beyond Earth itself, that was the direction he went. Up.

The first hint came from the Space Fence, an Air Force radar system built to detect and track satellites. He first read about it in technical manuals at work around 2012, then started researching online. The fence’s transmitters beamed up radio waves that spread into a fan shape, blanketing the continental US in a kind of radio force-field. When an object encountered the radio waves, its body reflected them back to the ground, where six receiving stations picked them up.

Coletta wondered if he could build his own receiving station, and pick up pings himself. After all, a radio antenna is a radio antenna, whether you’re getting “How’s it going, KM0MMM?” from Michigan or “beeeeeeeep” reflecting off a Lockheed Martin creation. He knew all he needed was wire, cut to the correct lengths—exact fractions of the main radio wavelengths. So he snipped some coat hangers, bent them straight, taped them to a piece of wooden moulding, and mounted the strange spear on a tripod. He added an amplifier and a receiver, which boost and digitize the radio waves, and hooked the antenna into his computer.

“Son of a gun,” he recalls thinking. “I’m getting signal.”

Soon, he became obsessed with getting those pingbacks to pour into his antenna. Near the beginning of 2013, he went live with a website—then www.satwatch.org—where he uploaded data.

At one point, he had observations for 150 satellites. He sonified their signals, turning the frequencies he received into notes human ears can hear. He liked to catch the military’s secret space shuttle, which sounded like a video game monster in agony. He liked the International Space Station, aurally analogous to a UFO dropping a bomb nearly to the ground and then tractor-beaming it back up just in time. He liked the non-secret shuttle, and the Chinese space station. And then there was the North Korean satellite Kwangmyŏngsŏng-3 Unit 2, a kind of shy bird.

Coletta seems to like seeing things he’s not necessarily supposed to. Radio waves from space objects are, in some ways, the great equalizer: What comes down from the sky belongs to anyone who can find it, and anyone with some coat-hangers and a computer could. But one day, Coletta’s collection of reflections stopped growing.

On September 1, 2013, he sat waiting for the ISS. But when the appointed time came, his plots just scrolled through static. “Hey, where’s the space station?” he thought. Then, as more nothing showed up, he thought, “Hey, where’s everything?”

“It happened,” he said on his webcast Space Gab. “It finally happened.” The Air Force had powered down the Space Fence, to save millions after sequestration. The agency is building a next-generation fence, slated for initial on-switch in 2018. But it will transmit at too high a frequency for a setup like Coletta’s.

But Coletta didn’t give up his hobby. He made a receiving antenna out of rabbit-ears, and later installed his current setup of four antennas. With these, he gets the direct transmissions from satellites, not just their reflections. Together, his antennaed view spans nearly the whole sky above his house, and a North Korean satellite—Kwangmyŏngsŏng-4—is about to come into view.

It seems to be an Earth observation satellite, possibly able to broadcast propaganda/patriotic songs. Coletta’s antenna should be to hear that hypothetical music—and he has tried and tried to catch the sat’s signals since 2016. He tries again today. “Wouldn’t that be cool if it came on?” he says. But NADA.

Oh well. One of the things he likes most these days, anyway, is searching for satellites no one officially cares about anymore. They are the ghosts of the Space Age, technically mere space junk. But a satellite operator’s trash is a satellite hunter’s treasure.

On a whiteboard to Coletta’s left is a list of antiques, their frequencies and launch years scrawled beside them. NOAA-9—”probably the most musical satellite up there,” which sounds like your drunk uncle whistling—is one of his favorites.

About a third of the way down one column is a sat called LES-1, which Lincoln Labs had abandoned by 1967, and which the iPad says will soon fly over. LES-1 was silent for decades, but in 2013, another amateur discovered that it transmitted whenever its solar panels met sunlight. Coletta saw it too, and has gone back and back, fascinated by its resilience. But not long ago, it disappeared.

He readies the computer interface anyway, hopeful. Maybe today is the day. We wait.

But LES-1 passes over silently. It cannot talk to Coletta, and Coletta has never been able to talk to it. Almost everything is like this: a one-sided conversation, from space to his setup to him.

He switches from the disappointing live screen to an old recording from July. It’s astronauts, he says, talking down to Earth.

At first there’s just static. Then, a voice fades in and out. Colored bands accompany each half-sentence: “Too awesome to imagine…help humanity explore and evolve.”

Legendary Haight Street Gets a New, Legal King of Weed

GizmoCrazed - May 12, 2019 0
This past Valentine’s Day, Shawn Richard stood before the San Francisco Planning Commission and made the case for why the board should let him...

Aston Martin’s vehicle lineup will be 100% hybrid by the mid...