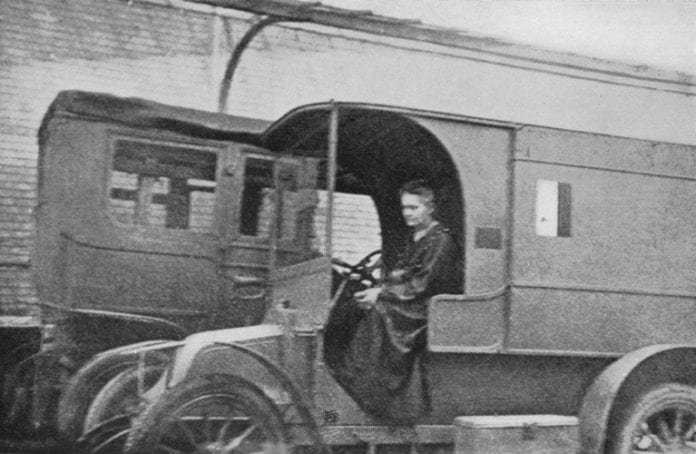 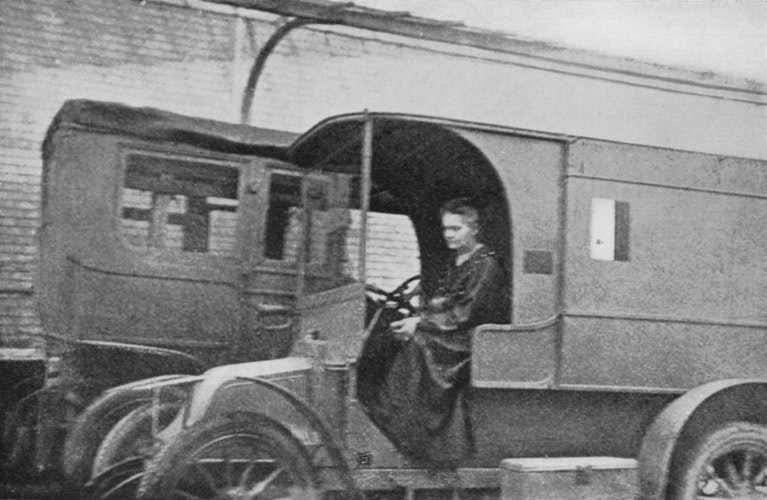 Marie Curie in one of her mobile X-ray units in October 1917. (Credit: Eve Curie)

Ask people to name the most famous historical woman of science and their answer will likely be: Madame Marie Curie. Push further and ask what she did, and they might say it was something related to radioactivity. (She actually discovered the radioisotopes radium and polonium.) Some might also know that she was the first woman to win a Nobel Prize. (She actually won two.)

But few will know she was also a major hero of World War I. In fact, a visitor to her Paris laboratory in October of 1917 – 100 years ago this month – would not have found either her or her radium on the premises. Her radium was in hiding and she was at war.

For Curie, the war started in early 1914, as German troops headed toward her hometown of Paris. She knew her scientific research needed to be put on hold. So she gathered her entire stock of radium, put it in a lead-lined container, transported it by train to Bordeaux – 375 miles away from Paris – and left it in a safety deposit box at a local bank. She then returned to Paris, confident that she would reclaim her radium after France had won the war.

With the subject of her life’s work hidden far away, she now needed something else to do. Rather than flee the turmoil, she decided to join in the fight. But just how could a middle-aged woman do that? She decided to redirect her scientific skills toward the war effort; not to make weapons, but to save lives.

X-rays Enlisted in the War Effort 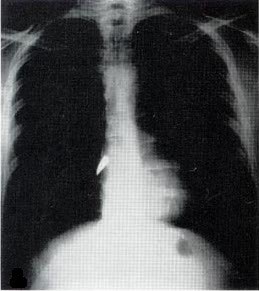 X-rays, a type of electromagnetic radiation, had been discovered in 1895 by Curie’s fellow Nobel laureate, Wilhelm Roentgen. As I describe in my book “Strange Glow: The Story of Radiation,” almost immediately after their discovery, physicians began using X-rays to image patients’ bones and find foreign objects – like bullets.

But at the start of the war, X-ray machines were still found only in city hospitals, far from the battlefields where wounded troops were being treated. Curie’s solution was to invent the first “radiological car” – a vehicle containing an X-ray machine and photographic darkroom equipment – which could be driven right up to the battlefield where army surgeons could use X-rays to guide their surgeries.

One major obstacle was the need for electrical power to produce the X-rays. Curie solved that problem by incorporating a dynamo – a type of electrical generator – into the car’s design. The petroleum-powered car engine could thus provide the required electricity. 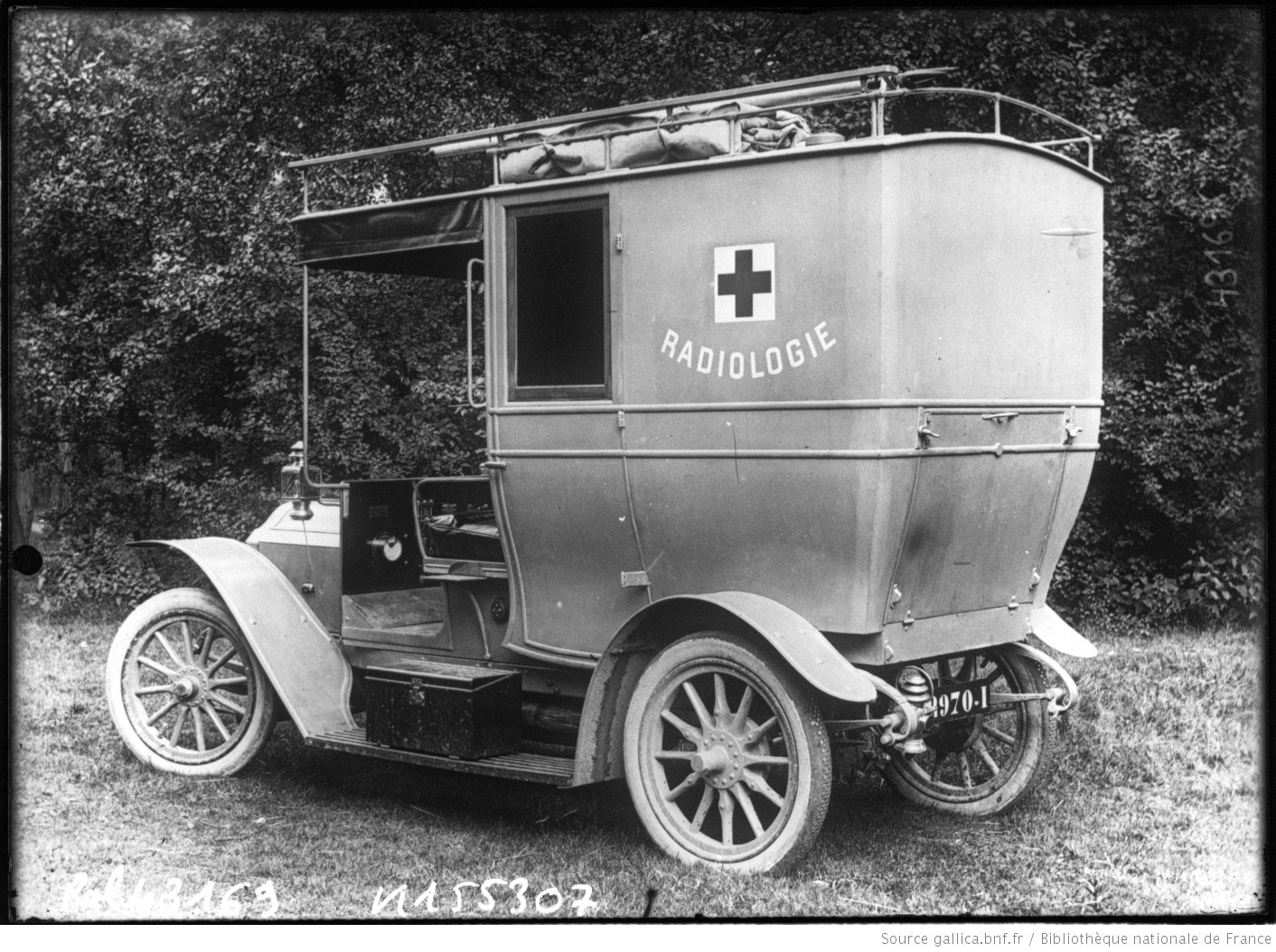 Frustrated by delays in getting funding from the French military, Curie approached the Union of Women of France. This philanthropic organization gave her the money needed to produce the first car, which ended up playing an important role in treating the wounded at the Battle of Marne in 1914 – a major Allied victory that kept the Germans from entering Paris.

More radiological cars were needed. So Curie exploited her scientific clout to ask wealthy Parisian women to donate vehicles. Soon she had 20, which she outfitted with X-ray equipment. But the cars were useless without trained X-ray operators, so Curie started to train women volunteers. She recruited 20 women for the first training course, which she taught along with her daughter Irene, a future Nobel Prize winner herself.

The curriculum included theoretical instruction about the physics of electricity and X-rays as well as practical lessons in anatomy and photographic processing. When that group had finished its training, it left for the front, and Curie then trained more women. In the end, a total of 150 women received X-ray training from Curie.

Not content just to send out her trainees to the battlefront, Curie herself had her own “little Curie” – as the radiological cars were nicknamed – that she took to the front. This required her to learn to drive, change flat tires and even master some rudimentary auto mechanics, like cleaning carburetors. And she also had to deal with car accidents. When her driver careened into a ditch and overturned the vehicle, they righted the car, fixed the damaged equipment as best they could and got back to work.

In addition to the mobile little Curies that traveled around the battlefront, Curie also oversaw the construction of 200 radiological rooms at various fixed field hospitals behind the battle lines. 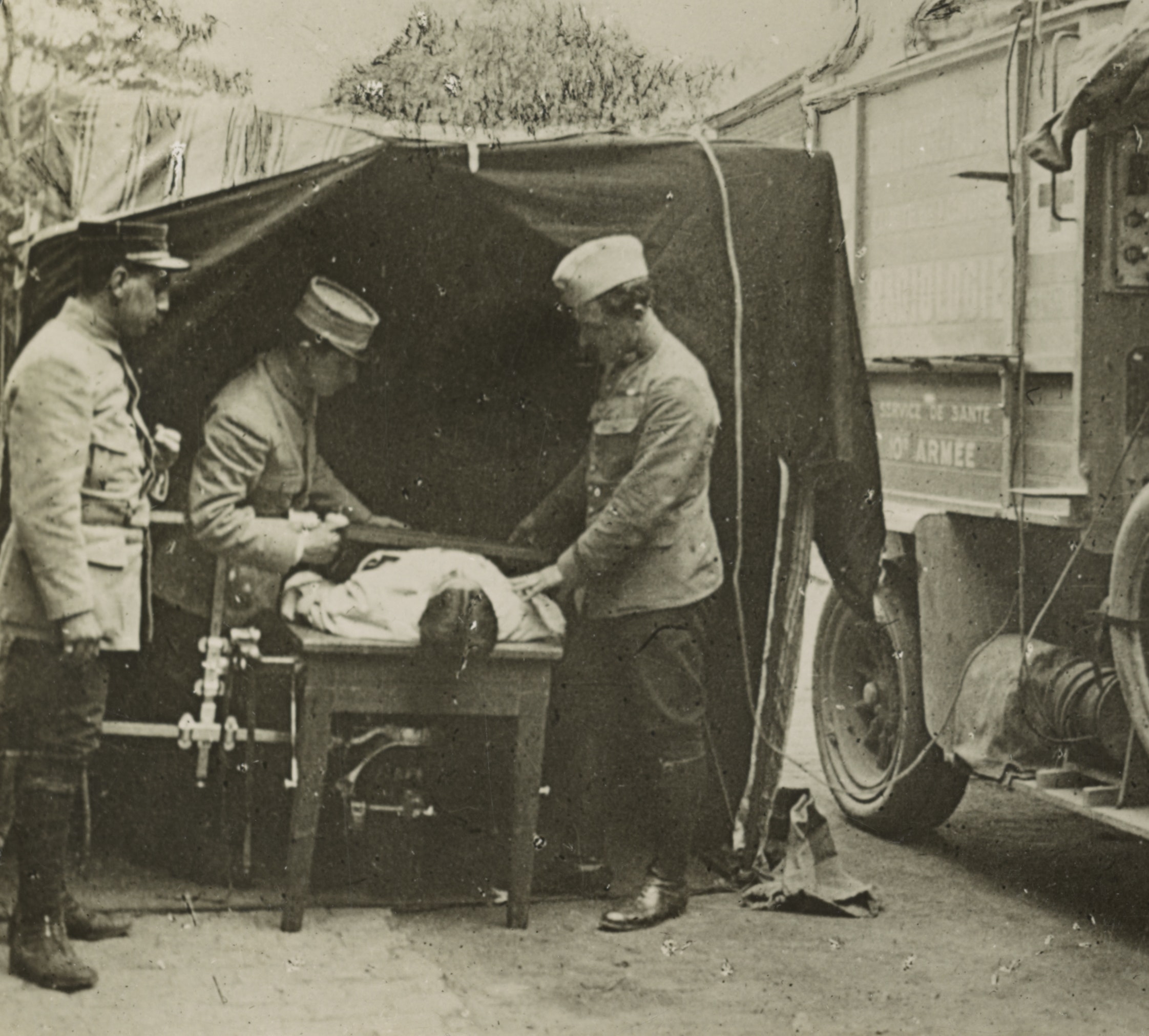 Although few, if any, of the women X-ray workers were injured as a consequence of combat, they were not without their casualties. Many suffered burns from overexposure to X-rays. Curie knew that such high exposures posed future health risks, such as cancer in later life. But there had been no time to perfect X-ray safety practices for the field, so many X-ray workers were overexposed. She worried much about this, and later wrote a book about X-ray safety drawn from her war experiences.

Curie survived the war but was concerned that her intense X-ray work would ultimately cause her demise. Years later, she did contract aplastic anemia, a blood disorder sometimes produced by high radiation exposure.

Many assumed that her illness was the result of her decades of radium work – it’s well-established that internalized radium is lethal. But Curie was dismissive of that idea. She had always protected herself from ingesting any radium. Rather, she attributed her illness to the high X-ray exposures she had received during the war. (We will likely never know whether the wartime X-rays contributed to her death in 1934, but a sampling of her remains in 1995 showed her body was indeed free of radium.) 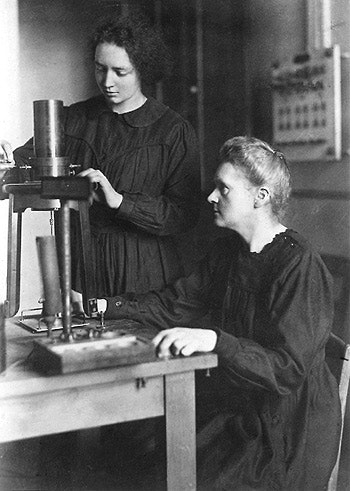 Marie Curie and her daughter Irène in the laboratory after WWI. (Credit: © Association Curie Joliot-Curie)

As science’s first woman celebrity, Marie Curie can hardly be called an unsung hero. But the common depiction of her as a one-dimensional person, slaving away in her laboratory with the single-minded purpose of advancing science for science’s sake, is far from the truth.

Marie Curie was a multidimensional person, who worked doggedly as both a scientist and a humanitarian. She was a strong patriot of her adopted homeland, having immigrated to France from Poland. And she leveraged her scientific fame for the benefit of her country’s war effort – using the winnings from her second Nobel Prize to buy war bonds and even trying to melt down her Nobel medals to convert them to cash to buy more.

She didn’t allow her gender to hamper her in a male-dominated world. Instead, she mobilized a small army of women in an effort to reduce human suffering and win World War I. Through her efforts, it is estimated that the total number of wounded soldiers receiving X-ray exams during the war exceeded one million.

GizmoCrazed - September 6, 2010 1
We have seen many announcements of tablets in recent weeks, as the Research & Development labs of the world work day & night to...