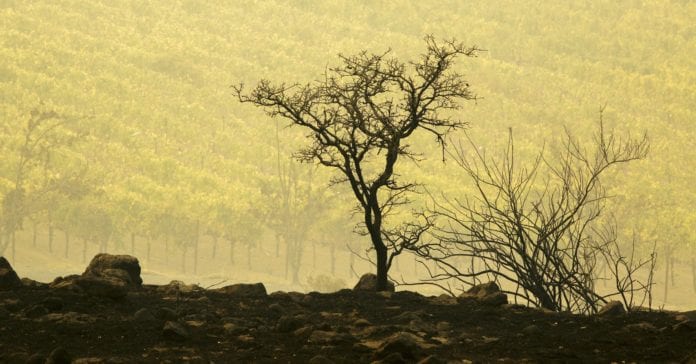 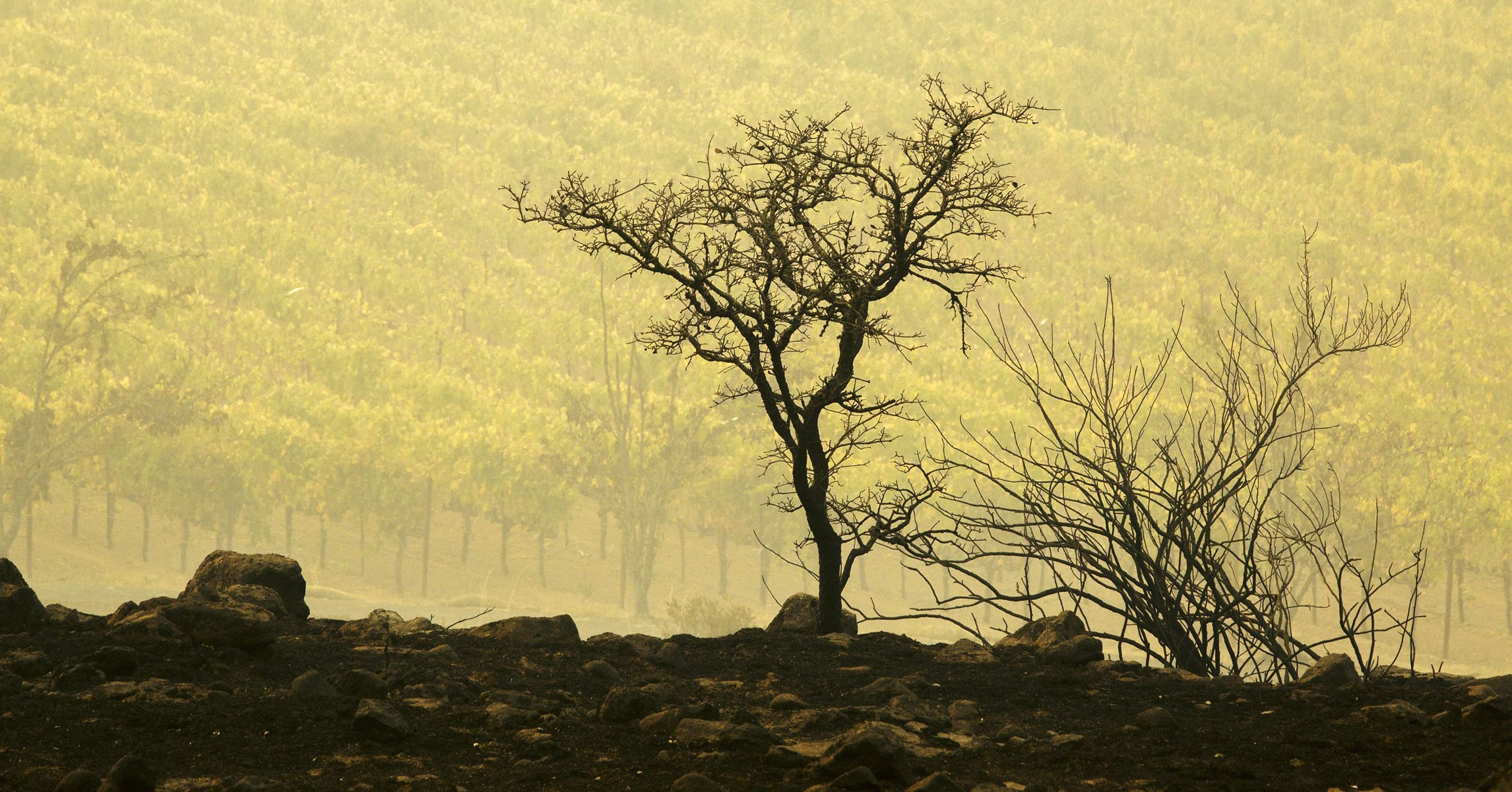 Nick Goldschmidt has been lucky so far. A wildfire has burned more than 8,000 acres just north of his vineyards in Geyserville, California, but so far his vines are OK. So is his house in Healdsburg, roughly midway between Geyserville and a 36,000-acre fire that destroyed more than 2,800 homes in Santa Rosa.

But now, amid the charred, empty spaces that scar northern California’s winegrowing region, under skies yellowed by smoke, Goldschmidt has a race to win. Wildfires can ruin the flavor of wine grapes, a problem called smoke taint. “I’ve worked with smoke before,” Goldschmidt says. “It is not an easy thing to fix. But in my experience, it’s more about contact time. So the key thing is, if you have vineyards near the fire, you’ve got to get the grapes off.”

Depending on wind, smoke from the Atlas Fire could potentially reach Goldschmidt’s Napa vineyard, where about 15 percent of the fruit remains to be harvested. He now plans to harvest the rest by the weekend.

That’s typical of Napa, where 80 to 85 percent of the 2017 harvest is done. In nearby Sonoma, 90 percent of the grapes are in. But that still means that a few grapes could get exposed to smoke, and fire and heat could damage the vines. In a region key to California’s $34 billion wine industry—and that figure doesn’t even include the enormous tourist business—that’s a big deal. Fires have killed 31 people so far, destroyed thousands of homes, and consumed the efforts of more than 8,000 firefighters. And the winemakers of the area are trying to make sure the damage to their livelihoods doesn’t get worse.

Winemaking regions around the world, especially in Australia, have been dealing with the consequences of more active fire seasons near vineyards since at least the turn of the century—but the problems haven’t really hit California yet. The state’s frequent fires haven’t intersected with its vineyards. Until now.

Smoke is complicated stuff. Everyone in the Bay Area has gotten a taste in the past few days—that medicinal, ashy, burnt flavor comes from, among other ingredients, molecules called polycyclic aromatic hydrocarbons, nitrogen and sulfur oxides, other organic compounds, and even tiny particles carried aloft by heat and air currents. If you’ve ever sat near a campfire or cooked on a grill, you know it’s not necessarily an unpleasant aroma, as cognitively dissonant as that may feel when you realize it comes from blazes that have destroyed the lives of thousands.

But what’s delicious in bacon or lox generally isn’t—depending on how much you have—in wine. The actual flavor compounds are molecules called volatile phenols. “Volatile” means they evaporate, and in chemistry “phenols” are benzene rings (a hexagon of carbon atoms with hydrogen atoms sticking off like a snowflake) connected to a hydrogen-and-an-oxygen. You might know them better as the aroma of peat in some whiskies or of antiseptic or Band-Aids. Their volatility means that in your mouth, they turn into a vapor that gets sucked up retronasally, through the back of the throat to the sensitive layer of nerve endings behind your nose that translates chemicals into odors.

Smoke taint in grapes has two specific markers: guaiacol and 4-methylguaiacol. They taste like, well, smoke. Expose grapes on the vine to them, and the wine will taste smoky. Obvious, right? Except no. “The mechanism is a little bit unclear,” says Kerry Wilkinson, an oenologist who studies smoke taint at the University of Adelaide. Leaves have pores called stomata involved in respiration, “but when grapevines are exposed to smoke, the stomata close almost immediately and photosynthesis stops,” she says. “The guaiacol conjugates are getting to not only the skins but the pulp of the fruit. I think it’s just permeation, but I don’t think anyone’s done the research.”

Making things even more complicated, grapevines have their own way of dealing with a barbecue. “Those compounds, once they’re taken up, the grapevine will stick one or more sugar molecules on them,” Wilkinson says. “We think that’s to make them less toxic to the plant.” This process—it’s called glycosylation, and the sugars are called glycosides—turns the volatile phenols non-volatile. Which means you can’t taste them in the grape juice.

But ferment that juice into wine, and acids in it will break those sugars off. Poof: Smoke gets in your wines.

I don’t mean to be flip here; smoke taint from the Canberra bushfires of 2003 cost Australian vineyards more than $4 million; fires in 2004 cost another $7 million. Once grapes are tainted, the wine isn’t easy to fix. Those ashy flavors are too strong; you can’t just try to blend in other, untainted wine to cover it up. Efforts to filter it with activated charcoal and reverse osmosis can filter out flavors you might want in the wine, too. Heck, guaiacol and 4-methylguaiacol are markers for oak-barrel aging, too. Nobody ever describes an over-oaked Chardonnay as “smoke-tainted,” but—well, maybe they should, actually. And some grape varietals—shiraz, particularly—already have naturally high guaiacol levels.

All of which might be fine. Most of the grapes were picked before the fires came. In general, “if the fruit’s already been harvested this year, it should be OK,” Wilkinson says. A couple dozen wineries suffered damage so far, from minor to total. But Northern California has almost 250,000 acres of wine grape vines—more than 100,000 of them in Napa and Sonoma Counties as of 2016.

It looks like the grapes those vines produce will be OK next year. “There’s no carryover effect from one season to the other,” Wilkinson says. “We haven’t seen any evidence to suggest that any of those smoke compounds are bound up from one season to another in the grapevine.” They get into the grapes, which come off, and the leaves, which fall off or get pruned. (And a little more luck: The grapes left to harvest in Napa are mostly Cabernet Sauvignon, which turns out to be more resistant to smoke taint than some other varietals.)

But vines themselves are sensitive to heat. “They can be scorched, and if it’s severe, that can permanently damage or kill grapevines,” Wilkinson says. “If there’s just a little bit of scorching, vines can recover, but the yield can be decreased in the season immediately after.”

It turns out it’s pretty hard to burn down a California vineyard. In part that’s because most of them are irrigated, so they’re wet and thus resistant to fire. Even when the cover crop growing between the vines gets burned in a fast-moving wildfire, “it’s pretty damn hard” to get a California vineyard to catch, Goldschmidt says.

When he was working in Chile, though, he saw a wind-driven wildfire very much like the ones affecting California destroy a vineyard. “That was devastating,” Goldschmidt says. “A lot of those vineyards are dry-farmed, so they burned much more easily.”

Heat damage is a lot like frost damage, something California vintners know a lot about. Proper pruning and treatment can save an injured vine. The trick is knowing if they’re injured, and how badly. Sometimes vintners will have to cut through the trunks of the vines to assess whether the phloem, the living and respiring part of the wood, is still healthy. But that’s a destructive test—sometimes destroying the vine in an attempt to save it.

So grape-growers look for other ways to assess their vines. “We look at things like, are the irrigation lines melted? Is there indication of scorching of the trunk and canopy? How much fire damage was there to anything growing in between the vines?” Wilkinson says.

That’s an assessment that’ll probably have to wait until the fires are under control. Maybe Goldschmidt’s luck will hold out. “This is my 29th vintage in Sonoma. It’s the first time the Alexander Valley was earlier in maturity than the Napa Valley. Usually it’s 10 days later,” he says. “If it had been the other way I would have really been hammered.”

Ordinarily I might end the story with that, but in this case it’s not as lucky as it sounds. Napa and Sonoma did indeed have a weird year. It rained hard after years of drought, and then over the summer it got really hot. Vintners irrigated when they might not have, which lowered the sugar levels in the grapes as they took up the water…and then it got hot again. “It’s been really hard to make a harvest decision based on sugar,” Goldschmidt says. “It’s been more about flavor and tannin.”

Based on those organoleptic assessments—the fanciest possible way of saying “how it tastes”—most of Napa and Sonoma brought in their fruit in July and August instead of, well, now.

To whom should the vintners send a thank-you? “Over the last five years or so we’ve had this period of very high temperatures that coincided with low precipitation, punctuated by very wet conditions,” says Noah Diffenbaugh, a climate researcher at Stanford. It’s exactly what Diffenbaugh’s group warned would happen in a prescient 2006 paper in the Proceedings of the National Academy of Sciences titled “Extreme heat reduces and shifts United States premium wine production in the 21st century.”

Their point? At first, heat and rare-but-extreme rain is going to change how winegrowing regions work. Eventually more northerly regions will be better for grapes—hello, Oregon’s Willamette Valley—and existing grape-growing regions will change the varieties they grow.

It’s in the nature of global warming that extreme climate events will become less rare. “We’ve done a lot of work trying to understand how global warming impacts temperature extremes,” Diffenbaugh says. “The extremes are really where we feel the climate.”

The vagaries of climate change let the 2017 vintage mostly dodge the economic devastation that smoke taint would have caused. It’s a faintly silver lining to the clouds of ash and smoke now parked over thousands of acres of death and destruction. But that silver lining won’t last. These won’t be the last fires; next time, maybe the harvest won’t happen first. The most frightening truth about the extreme climate event that is the northern California fires is that such events won’t always be extreme. They’ll be normal.