That’s the spot! Thanks to drone technology, this polar bear was spotted getting cozy. (Credit: Intel Corporation)

Polar bears’ fortunes deeply tied to the whims of a changing climate, and as the Arctic continues to warm it’s increasingly important to keep an eye on their populations. But the Arctic’s stark white terrain can make that a difficult task to accomplish.

In the past, helicopters have been used to spot the bears, but those aircraft are both costly and disturbing to the wildlife. However, drones are a low-cost, less invasive alternative. On a recent Arctic mission, drones helped gather data about polar bears that will help researchers get a better idea of how climate change in the region, and around the world, affects wildlife.

The biggest threat to the Arctic polar bear population is loss of sea ice due to climate change. Wildlife photographer and conservationist Ole Jørgen Liodden likens polar bears to the canaries miners relied on to alarm them of harmful gases.

“If [polar bears] are struggling, we will be the next ones struggling because the climate change will affect all of us,” he said in a video.

On a recent Arctic expedition, Liodden used Intel’s Falcon 8+ drone took to the sky in order to shed light on the happenings of the polar bear population. Equipped with a thermal camera, Liodden and the team could see the bears on the white ice that would otherwise camouflage them.

The drone made several flights, with each one lasting no more than 12 minutes because cold climates severely limit battery life. In a temperate climate, the drone could fly for up to 18 minutes, according to Anil Nanduri, general manager of Intel’s UAV segment.

“We would typically keep the batteries inside the boat where it was warmer, or inside our jackets, then put them into the drone just before we needed to launch to keep them warmer to be able to provide the best battery life,” Nanduri said.

Liodden is using the drone to capture data on polar bears’ behavior, breeding, feeding and migration habits. These data will be used by researchers to help understand how climate change is affecting the Arctic and global ecosystems. 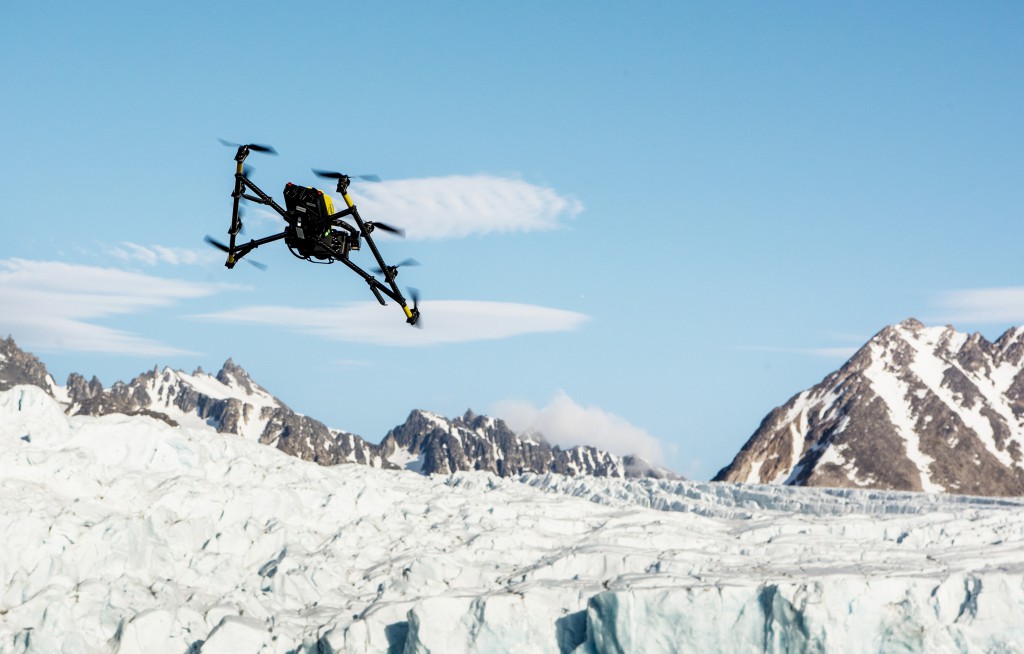 There are obvious advantages to using drones when it comes to wildlife research, but it’s important to ask: Does a hovering drone distress wild animals?

In this case, the polar bears were apparently unfazed by the drone whirring about 164 to 328 feet away from them. Researchers said the bears “did not show any signs of distress or changes in behavior” when the drone was around, according to the news release.

But a research study by Mark Ditmer published in the journal Current Biology in 2015 shows otherwise. In the study, Ditmer flew his drone near bears wearing heart rate monitors. When the bears discovered the drone their heart rates increased significantly each time. A group of French researchers conducted similar studies on birds; the birds began to show signs of stress when a drone came within 15 feet of them.

Beyond helping scope out camouflaged polar bears, Nanduri wants scientists to know drones “are very capable platforms that can be used for novel applications beyond just the commercial roles that they were designed for.”

Khizar Mashhadi - April 26, 2012 0
Here we list the Top 8 Android apps that no businessman should do without. 1. Google GDocs/ Google Drive If you work with Google docs then...

Space Photos of the Week: Dead Stars and a Cute L’il...

The Evolutionary Importance of Neutral vs. Adaptive Genes