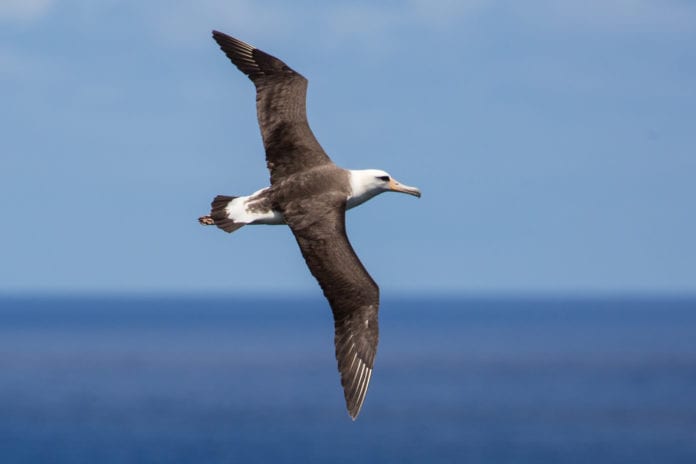 We’ve seen drones modeled after geckos, insects and if you’ve watched Black Mirror there’s no way you can forget the massive bee drone swarms. Now, scientists are looking to one of nature’s best fliers, the albatross, for tips to help drones fly longer distances.

The albatross is one of the world’s largest living birds, with a wingspan of up to 11 feet across. It can fly hundreds of miles in just one day, while exerting very little effort. But how does it do this? Two separate groups of researchers discovered two very different reasons for this species’ long-lasting flights.

An October study published in the Journal of the Royal Society Interface, describes the albatross as a flying sailboat. According to the paper, the bird flies best in the crosswind and when making shallow arcs.

“If we want to design robots that use the wind, now we know that moving forward along shallow arcs favors both travel speed and efficient energy extraction,” co-author Jean-Jacques Slotine, professor of mechanical engineering and information sciences and of brain and cognitive sciences at MIT, said in a news release. “And it turns out the albatrosses are doing it that way.”

But color might also play a role in the albatross’ impressive endurance. The albatross, and many other large migrating birds, have black on the top of their wings. Another study, published in March in the Journal of Thermal Biology, analyzed the thermal impact on the color of a bird’s wing.

Scientists found a temperature difference of about 50 degrees between dark and light colored top wings. That extra heat reduces the drag on the albatrosses wings, according to the paper, contributing to the animal’s ability to fly such long distances.

Both of these research reports could have major impact on the future of drones, even leading to wind-powered drones.