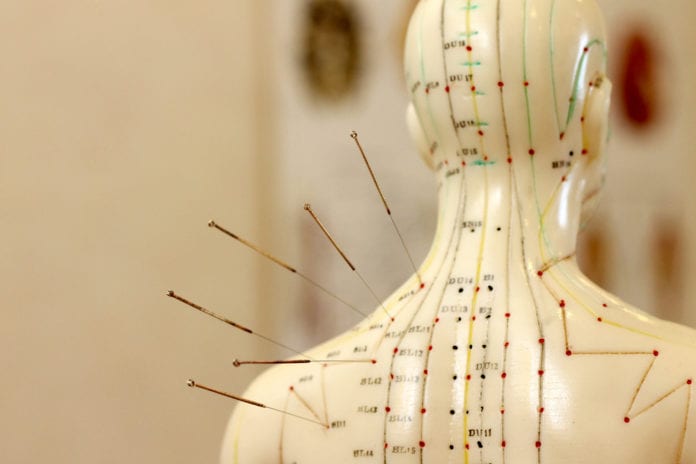 Acupuncture is a form of traditional medical therapy that originated in China several thousand years ago. It was developed at a time bereft of tools such as genetic testing or even a modern understanding of anatomy, so medical philosophers did the best they could with what was available – herbs, animal products and rudimentary needles. In the process, perhaps, they stumbled on an effective medical approach.

In the past century, some modernization has taken place. For instance, acupuncture has been paired with electrical currents, allowing for stimulation to be more continuous and to penetrate deeper into the body. This approach was termed electro-acupuncture and represents a convergence between the ancient practice of acupuncture therapy and modern forays into targeted electrostimulation delivered to the skin or nerves. Such approaches have attracted the attention of the pharmaceutical industry and are part of a growing class of neuromodulatory therapies.

So why all the rancour against acupuncture from some corners of the internet (and academia)? Shouldn’t we apply our modern research methods to see which classical acupuncture techniques have solid physiological backing?

It’s not as easy as it seems. Let’s look at the clinical research. A recent landmark meta-analysis threw together data from thousands of chronic-pain patients enrolled in prior clinical trials, finding that acupuncture might be just marginally better than sham acupuncture (in which non-inserted needles are used as a placebo control). The differences were statistically significant, but lack of a larger difference could be due to the clinical outcome measure that the researchers studied. Symptoms such as pain (along with fatigue, nausea and itch) are notoriously difficult for different people to rate in a consistent manner. Conventional wisdom says that these kinds of symptoms are improved by placebo, but what about improvements in the body’s physiology? For instance, in a recent study that assigned an albuterol inhaler for asthma to some patients and sham acupuncture to others, patients reported both as effective. But objective physiological measures demonstrated significant improvement only for albuterol. It’s clear that in evaluations of acupuncture, research should explicitly hunt for potential physiological improvements, in addition to patient reports.

While most chronic-pain disorders lack such established, objective outcomes of disease, this is not true for carpal tunnel syndrome (CTS), a neuropathic pain disorder that can be validated by measuring electrical conduction across the median nerve, which passes through the wrist. Interestingly, the slowing of nerve conduction at the wrist does not occur in isolation – it’s not just the nerve in the wrist that’s affected in CTS. My own department’s research and others’ has clearly demonstrated that the brain, and particularly a part of the brain called the primary somatosensory cortex (S1), is re-mapped by CTS. Specifically, in functional magnetic resonance imaging (fMRI) brain scans, the representation of fingers innervated by the median nerve are blurred in S1. We then showed that both real and placebo acupuncture improved CTS symptoms. Does this mean that acupuncture is a placebo? Maybe not. While symptom relief was the same immediately following therapy, real acupuncture was linked to long-term improvement while sham acupuncture was not. And better S1 re-mapping immediately following therapy was linked with better long-term symptom reduction. Thus, sham acupuncture might work through an alternative route, by modulating known placebo circuitry in the brain, while real acupuncture rewires brain regions such as S1, along with modulating local blood flow to the median nerve in the wrist.

Where you stick the needle might matter as well. While site-specificity is one of the key features of acupuncture therapy, it has been controversial. Interestingly, in the S1 region of the brain, different body areas are represented in different spatial areas – this is how we localize the mosquito that’s biting us, and swat it. Different S1 areas might also pass along information to a diverse set of other areas that affect different bodily systems such as the immune, autonomic and other internal motor systems. As far as acupuncture is concerned, the body-specific map in S1 could serve as the basis for a crude form of point specificity. In our study, we compared patients receiving real acupuncture locally to the wrist with patients receiving real acupuncture far from the wrist, in the opposite ankle. Our results suggested that both local and distal acupuncture improved median nerve function at the wrist. This suggests that the brain changes resulting from acupuncture might not just be a reflection of changes at the wrist, but could also drive the improved median nerve function directly by linking to autonomic brain regions that control blood vessel diameter and blood flow to the median nerve.

This new research clearly demonstrates that bodily response is not the only means by which acupuncture works; response within the brain might be the most critical part. Once we better understand how acupuncture works to relieve pain, we can optimize this therapy to provide effective, non-pharmacological care for many more chronic-pain patients.

The Green New Deal Shows How Grand Climate Politics Can Be

Budget iPhone To Be Available In 10 Different Colors

What Is Your Take As A Parent In The Digital World?...