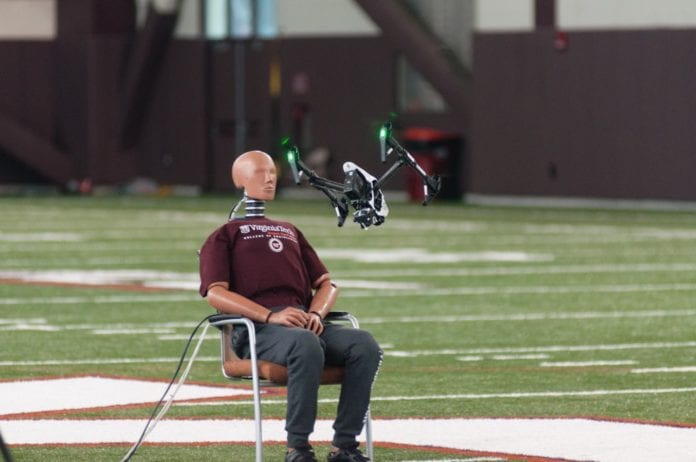 Watch out dummy, there’s a drone coming at you! (Credit: Virginia Tech)

Thanks to a dummy we now have a better idea of what happens when a drone hits a person’s head.

A study by researchers at Virginia Polytechnic Institute and State University (Virginia Tech) one of the Federal Aviation Administration’s UAS (unmanned aircraft systems) test sites, suggests that commercial-sized drones can cause a wide range of injuries to people on the ground.

In the United States, drone flights over people are not permitted. However, the FAA has been entertaining widespread adoption and grants waivers to some commercial operators. But in order for drones to fill the sky they must be able to fly over people.

Before that can happen, policymakers need to understand the risks associated with drones hovering above the public, like potential injuries if one hurdles toward unsuspecting passers-by. Automobile safety, for example, has come a long way thanks to risk-based tests, according to the study.

Come At Me Drone

Published in the Annals of Biomedical Engineering, the study evaluated the range of head and neck injuries caused by three different sized drones—the DJI Phantom 3 (2.2 pounds), DJI Inspire 1 (6.8 pounds) and DJI S1000+ (24.2 pounds). All are below 55 pounds and were flown below 100 mph; limitations set forth by the FAA under its Part 107 commercial drone rules.

Two tests were administered: flying drones full-speed at the dummy, and dropping drones on its head. The dummy was laden with sensors to measure acceleration and force, which were then compared to standard benchmarks for forces with potential to cause severe or life-threatening injuries, such as skull fractures.

In general, the study found the larger a drone’s mass the higher chance of injury. Also, the risks of injury were lower when the quads were propelling toward the dummy. That’s likely because a drone’s propeller or arm hit them instead of its base—where it packs the most weight—causing minor injuries. When drones were dropped (from a height of 18 feet) more of the craft’s mass hit the dummy, increasing the overall risk of injury. However, it’s important to note that the drones didn’t fly into the dummy as many times as it fell, which could impact the data.

“There’s a wide range of risk,” said Steven Rowson, a leader of the study and an assistant professor in the college of engineering at Virginia Tech, in a news release. “In some instances it was low, and in some instances it was high, and there are lessons we can take away from that to reduce injury risk in a deliberate way through product design.”

These findings are similar to the UAS Ground Collision Severity Evaluation conducted by the FAA in April. That study compared the impact of a Phantom 3, metal and wood when hitting a crash dummy.

Probably not. The researchers at Virginia Tech will use the data gathered to conduct tests in the future. And the FAA will likely demand many more.

“The big question right now is, ‘What is the acceptable level of safety?’” said Mark Blanks, director of the Virginia Tech Mid-Atlantic Aviation Partnership, which assisted with the study. “How much proof does the FAA need before they say, ‘Yes, that’s OK’? Once those standards are in place, we’re going to see huge expansion in the industry.”

Before we go, let’s watch the dummy take a drone to the face again. It just never gets old.

Thank you for taking drones to the face, dummy. We owe you big time. (Credit: Virginia Tech)

Aibo hangs out with some (real) dogs

Dive into the Mind-Boggling Math of Tessellating Pentagons