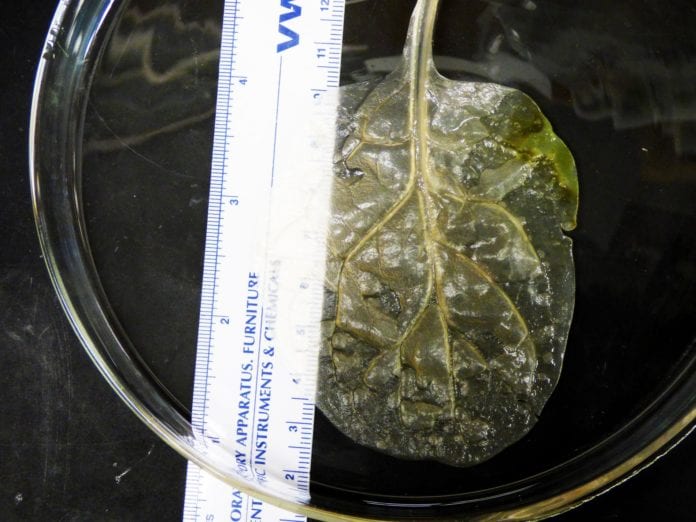 Scientists have found a way to use spinach to build working human heart muscle, potentially solving a long-standing problem in efforts to repair damaged organs.

Their study, published this month by the journal Biomaterials, offers a new way to grow a vascular system, which has been a roadblock for tissue engineering.

Scientists have already created large-scale human tissue in a lab using methods like 3D printing, but it’s been much harder to grow the small, delicate blood vessels that are vital to tissue health.

“The main limiting factor for tissue engineering is the lack of a vascular network,” says study co-author Joshua Gershlak, a graduate student at Worcester Polytechnic Institute in Massachusetts, in a video describing the study.

The team then bathed the remaining plant frame in live human cells, so that the human tissue grew on the spinach scaffolding and surrounded the tiny veins.

Once they had transformed the spinach leaf into a sort of mini heart, the team sent fluids and microbeads through its veins to show that blood cells can flow through this system.

The eventual goal is to be able to replace damaged tissue in patients who have had heart attacks or who have suffered other cardiac issues that prevent their hearts from contracting.

Like blood vessels, the veins in the modified leaves would deliver oxygen to the entire swath of replacement tissue, which is crucial in generating new heart matter.

The study team says the same methods could be used with different types of plants to repair a variety of tissues in the body.

“Adapting abundant plants that farmers have been cultivating for thousands of years for use in tissue engineering could solve a host of problems limiting the field.”