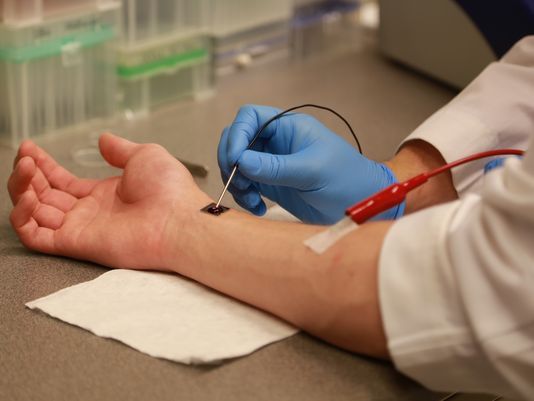 In laboratory tests, this process was able to heal the badly injured legs of mice in just three weeks with a single touch of this chip.

The technology works by converting normal skin cells into vascular cells, which helped heal the wounds.

The technology, known as Tissue Nanotransfection, has the potential to save the lives of car crash victims and even deployed soldiers injured on site.

It’s a dime-sized silicone chip that “Injects genetic code into skin cells, turning those skin cells into other types of cells required for treating diseased conditions,” according to a release.

In lab tests, one touch of TNT completely repaired injured legs of mice over three weeks by turning skin cells into vascular cells.

It not only works on skin cells, it can restore any type of tissue, Chandan Sen, director of the Center for Regenerative Medicine and Cell-Based Therapies, said.

The technology restored brain function in a mouse who suffered a stroke by growing brain cells on its skin.

This is a breakthrough technology, because it’s the first time cells have been reprogrammed in a live body.

Current cell therapy methods are high risk, like those that introduce a virus, and include multiple steps, a new study published in Nature Nanotechnology points out.

There are no known side effects to TNT and treatment is less than a second, Sen said.

“We are proposing the use of skin as an agricultural land where you can essentially grow any cell of interest,” Sen said.