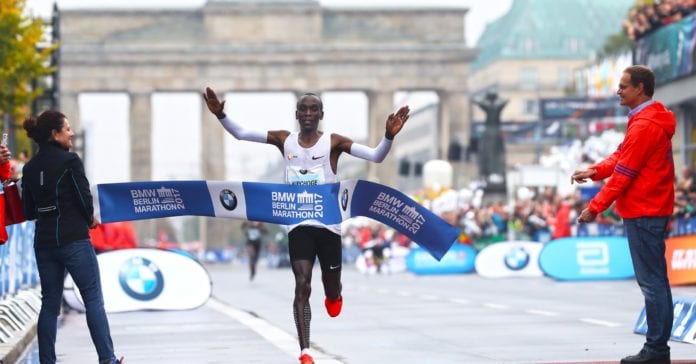 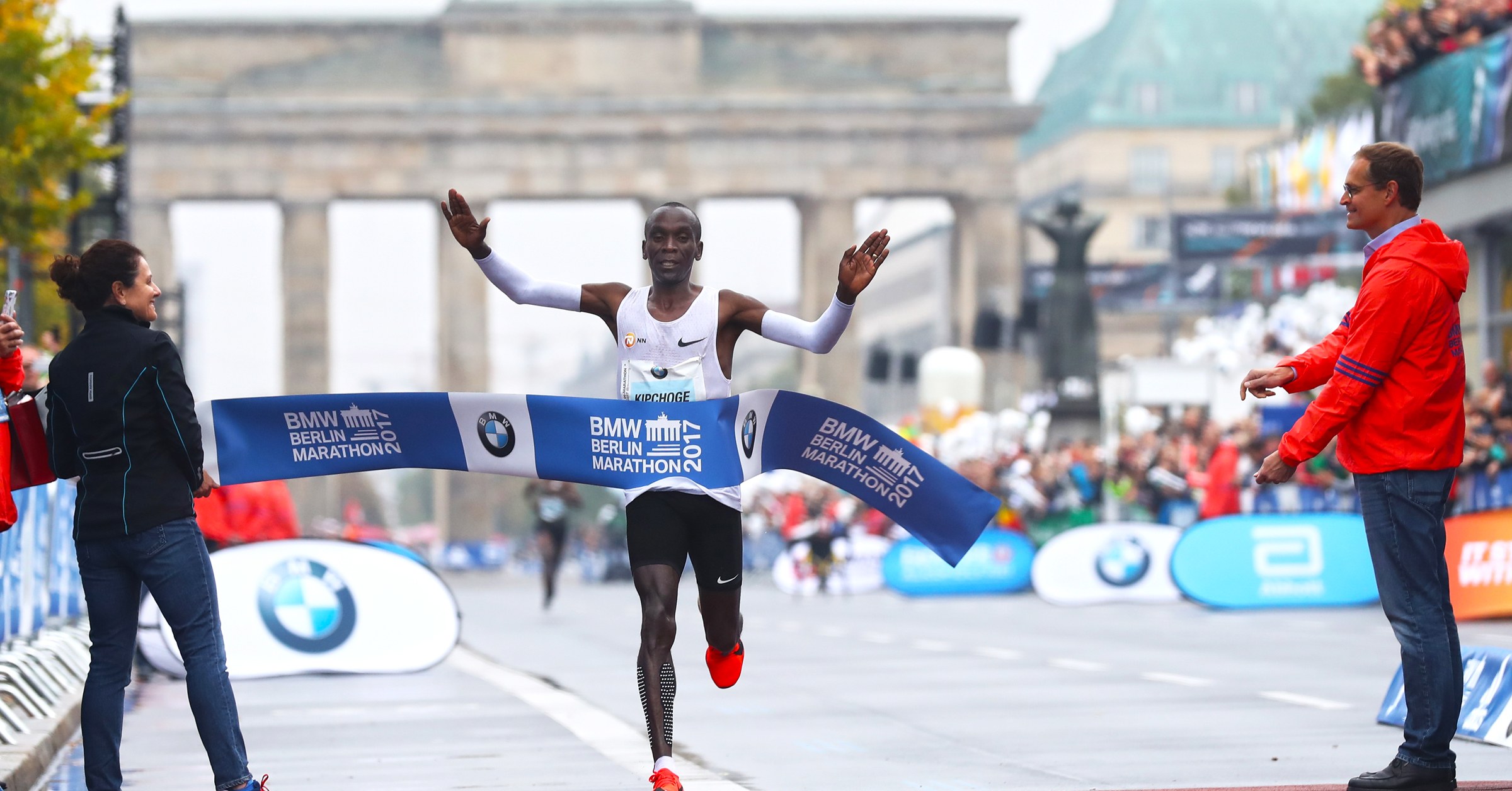 Marathon wisdom told you it was too rainy, too slippery, and too warm for fast times at this morning’s Berlin Marathon, but Eliud Kipchoge refused to be overcome, either by the conditions or by his competitors. He won a race against perhaps the strongest field assembled in the past decade, even after a surprise attack by a debutant marathoner, Guye Adola, threatened to spoil his day. Kipchoge eventually missed the world record by 35 seconds, finishing in 2:03:32—a miraculous time in the circumstances. In both the fact and the manner of his victory, he has laid to rest any debate about who is the best marathon runner of this generation.

Berlin woke up in a cloud. In the forested Tiergarten, where the race starts, it was 57 degrees—significantly too hot for the fastest times—and the air was thick and moist. The official weather forecast said it was 99 percent humidity, but it’s hard to imagine how they missed that final one percent. The air was like soup. Humidity is a problem for elite athletes.

If the atmosphere was thick, so was the sense of expectation. As the three star athletes—Eliud Kipchoge, who ran 2:00:25 in Nike’s Breaking2 experiment earlier this year; Wilson Kipsang, the only man ever to win New York, London, and Berlin; and Kenenisa Bekele, world and Olympic record holder in 5,000 and 10,000 meters, and last year’s Berlin winner—warmed up in front of the start line, they betrayed their states of mind. Bekele looked tight with nerves as he stretched out his arms above his head, while Kipsang and Kipchoge ran some fast sprints and smiled easily to the crowd. Kipsang’s grin cracked briefly when the starter announced his rival, Kipchoge, as “the world’s best marathon runner.”

From the start, Kipchoge, wearing a white singlet, black half-tights, and red shoes, tucked in behind the three elite pacers, who had been asked to lead the fastest athletes to halfway in a previously unthinkable split time of 60 minutes and 50 seconds. The rain soon became intense, and it became obvious that nobody was going to run so fast for the first half. Simply turning a corner required care and concentration. Every time the lead pack did so, they slowed considerably. As the rain intensified, Gideon Kipketer, the rangy pacemaker (and Kipchoge’s training partner) screwed his face up into the weather.

The lead pack, which included not just the three big names but the Ethiopian debutant Adola and the Kenyan Vincent Kipruto, made halfway in 61:30, a second or two outside world record pace. In the conditions, it was an excellent split. The weather also started to lift a little, and Kipchoge looked increasingly comfortable.

Bekele, though, was dropped from the lead pack at halfway, unable to live with the pace. He did not finish the race. By 17 miles, only one pacemaker had survived—Sammy Kitwara. He dropped out at the 30-kilometer (18.6 mile) mark, and so—to everyone’s surprise—did Wilson Kipsang, clutching his stomach.

Almost everyone was suffering. Not only was the road slippery, but the athletes’ clothes were sticking to the skin, and—most importantly—all the runners would have found it hard to regulate their temperature. One of the limiting factors in marathon running is an athlete’s ability to dissipate the heat generated while synthesizing the energy needed to run so fast. Mostly, body heat is lost through sweating. But, the thicker and warmer the air, the harder that process becomes.

For the final seven and a half miles, it was Kipchoge, the master, versus Adola, the newcomer. Adola, who is taller and has a scruffier gait, seemed relaxed, and Kipchoge looked actively irritated by the close attention the Ethiopian was paying him. Kipchoge asked Adola more than once to move either in front or behind him. Adola continued as he was, shoulder to shoulder with the senior man. As they jostled, the world record drifted away. At the 35-kilometer (21.7 mile) marker, Kipchoge was around six seconds outside world record pace. But, oddly, it was at this moment that Kipchoge began to smile. Battle was joined.

Race to the Finish

At around 23 miles, Adola attacked, opening a gap of 10 meters and moving to the other side of the road as if to accentuate the distance between he and Kipchoge. The Kenyan responded, and seemed to be reeling Adola in, but the Ethiopian pressed again. Even as the world record drifted toward impossibility, nobody who was watching the race cared. This was thrilling sport, a true duel. With two miles to go, Kipchoge seemed visibly to muster reserves of energy for a final attempt to break Adola, and at the final drinks station at 40 kilometers (24.8 miles), he caught him, and then blew past him.

Kipchoge finished with a kick. When he crested the line, he looked as happy as a lottery winner. He hugged his coach, Patrick Sang, and saluted the crowd. Sang is not normally given to hyperbole, but his pride, minutes after the race had ended, was uncontainable.

I’d go a step further. Eliud Kipchoge has never broken the world record, but I’ve now watched four races in which he was in shape to do so—the London Marathon of 2016, which he won in 2:03:05, the Rio Olympic Marathon which he won in 2:08:44, the Breaking2 race at Monza which he won in 2:00:25, and today’s Berlin Marathon. In each case, he would have ripped chunks out of the world record in perfect conditions. But he has either been running on a slow course, or in slow conditions, and the title of world-record holder has evaded him. That’s marathon racing. In this sport, you have to be good and lucky.

Kipchoge may never break the world record now. The years, and the marathons, are piling up. He would never admit this, but it’s possible his chance has come and gone. In the final reckoning, it won’t matter. Nobody who watched Kipchoge win those four races could be in any doubt of his superiority. Today’s race was a reminder not just of his physical talents but of his mental fortitude. World record or no world record, he is the greatest.