Delivery drones are carrying customer orders for burgers and smartphones across a bay of water straddled by the Icelandic capital of Reykjavik—and that’s just the start of a much more ambitious plan. Before the end of 2017, the Israeli startup Flytrex envisions sending its delivery drones to the street corners of certain Reykjavik neighborhoods.

The dream of delivery drones dropping of packages on doorsteps or in backyards has faced considerable challenges in taking flight. No company can yet claim to have solved all the problems facing delivery drones that would have to possibly navigate trees or power lines while delivering packages so close to a home or business. Instead, most companies such as Flytrex have gotten early delivery drone operations off the ground by focusing on simplified delivery routes between certain locations. But Flytrex is already working with Iceland’s government regulators on a plan to begin aerial deliveries to neighborhood street corners by the end of the year.

“We are already working with the Icelandic Ministry of Transportation on delivering almost to the backyards of people,” says Yariv Bash, CEO and Co-Founder of Flytrex. “We’ll be delivering to street corners just outside of houses.”

The Flytrex delivery drone operations that kicked off in Iceland in August 2017 are somewhat more modest in scope. Flytrex drones are currently delivering certain customer orders on behalf of AHA, an Icelandic e-commerce company that handles online marketplace and delivery transactions for restaurants, retails and grocery stores. The drones enable direct 10-minute delivery between two points of Reykjavik separated by a large bay of water. That would normally require a delivery person to spend up to half an hour driving each way along a more indirect ground route and over a river bridge. 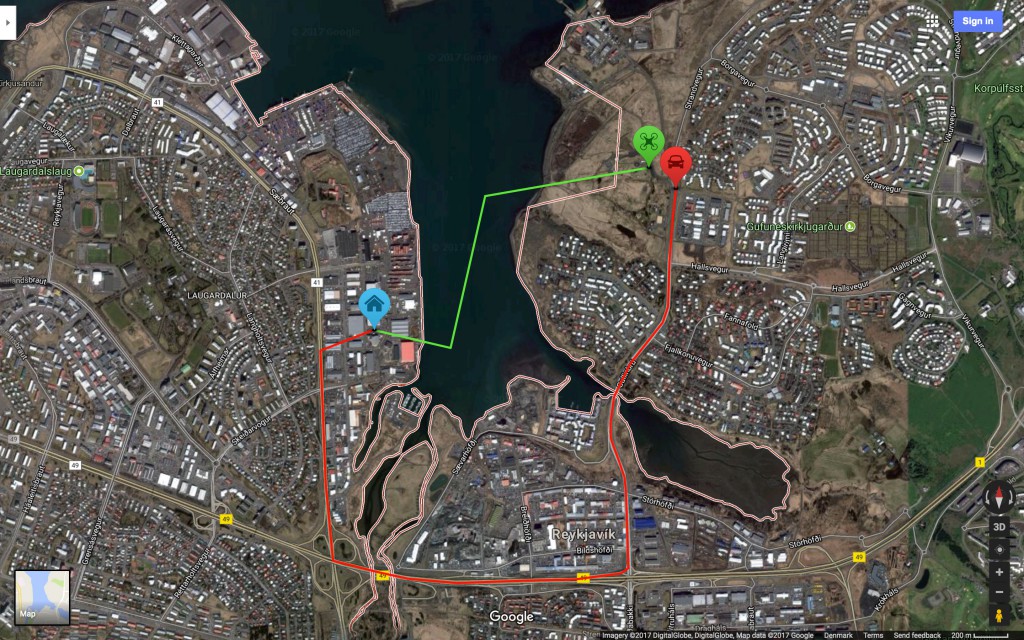 The startup Flytrex has begun a delivery drone service route over a bay of water separating two parts of the Icelandic capital Reykjavik. Credit: Flytrex

It’s a fairly uncomplicated route with an open area for a drop-off point. That makes it much easier for Flytrex to streamline the logistics behind the delivery drone operation and keep costs to a minimum. For example, the uncomplicated flight route and lack of obstacles means that Flytrex can automate the drones and allow them to deliver packages without direct human piloting or control. Having drones fly on autopilot makes it easier to run an operation with fewer people.

The company began with one or two drones doing up to 20 deliveries per day when it began the Reykjavik operation last month, but planned to ramp up deliveries to as many as 40 or 50 flights per day. To ensure a quick turnaround, people on the ground stand ready to swap in fresh batteries for the delivery drones and keep multiple packs of batteries always charging.

This delivery drone operation could get more complicated as Flytrex works with Icelandic regulators on expanding to neighborhood deliveries. But the company seems to be betting that sending drones to a set number of street corner locations will still be fairly straightforward. “We’re going to start with a few tens or hundreds of fixed locations, such as street corners, so that you can choose the nearest street corner to get your delivery,” Bash says. 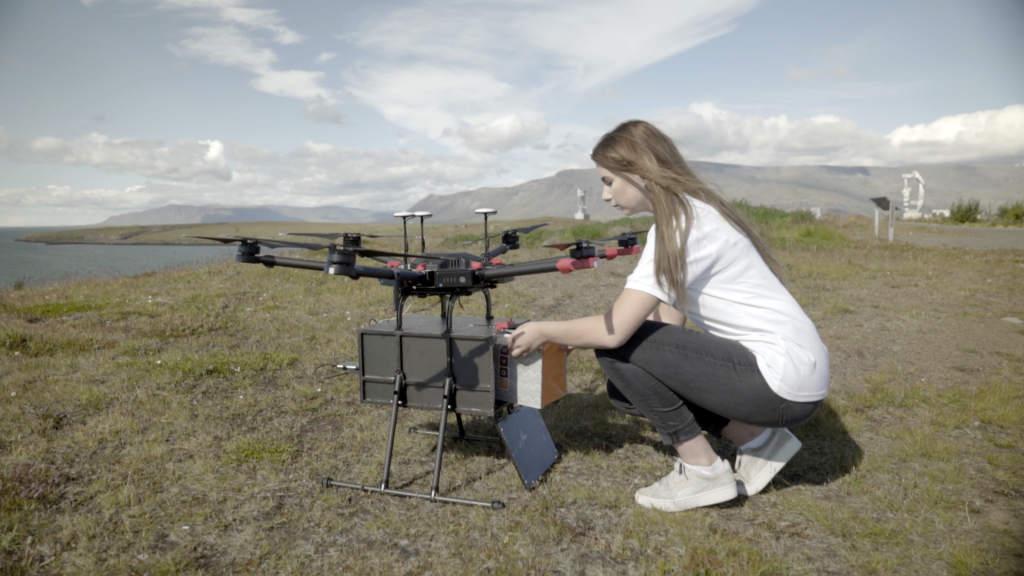 Flytrex’s future plan to eventually move beyond even street corners and enable backyard (or front yard) delivery would likely prove most challenging of all. A human pilot might be required to check each delivery drone’s drop-off point and take over in piloting if trees or power lines present more complicated obstacles.

Rather than land the drone, Flytrex has already developed a system of hovering in midair and using cables to lower packages. That avoids even more potential ground hazards and keeps the multirotor drones’ spinning blades safely out of reach of people or animals on the ground. (Flytrex uses modified consumer drone models produced by the Chinese company DJI.)

The delivery drone startup called Flirtey has also been conducting limited demonstrations with the convenience store chain 7-Eleven in the United States and with Domino’s Pizza in New Zealand. But Bash emphasized that the Flytrex operation in Reykjavik represents one of the very first commercial delivery drone services to actually go beyond limited test runs.

Significant challenges still lie ahead for the market in terms of ensuring safe operations for swarms of delivery drones in the skies above crowded cities. And there is a question of whether or not any of the delivery drone services can streamline their operations to make deliveries cost-effective in certain complicated environments such as crowded cities with high-rises. Furthermore, many delivery drones that rely on the multi-rotor design of vertical takeoff and landing tend to still have somewhat limited delivery ranges and payload weight based on battery life.

Despite the competition and challenges, Flytrex sees a fairly open market with many opportunities, even in the presence of giants such as Amazon. Bash points out that many retailers and restaurants will likely need to eventually offer faster delivery service in the form of delivery drones in order to stay competitive. He envisions Flytrex stepping up to help those businesses that are not Amazon or Google to fulfill aerial deliveries for their customers. “We’re like a single palm tree in the Sahara desert,” Bash says. “The market is huge, enormous, almost infinite.”

GizmoCrazed - October 12, 2017 0
This much scientists know: Humans pump about 40 billion tons of CO2 into the atmosphere every year. Less clear is where the planet puts...

This Is How Much You Can Have Of Everyday Things Before...

The U.S. government wants access to data stored in the UK