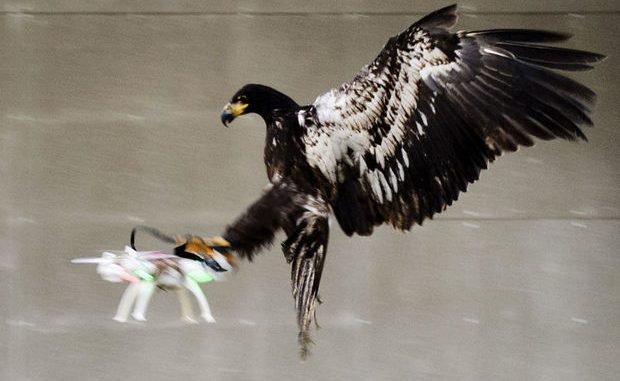 Drones owned by one of the world’s largest gold mining companies are being destroyed by native eagles, costing the company thousands of dollars.

Mining is one of the most destructive forces currently on the face of the planet.

Gold mining is particularly destructive as its waste carries mercury and cyanide, which are typically used to extract gold from rock.

This type of mining is considered particularly destructive because of its wastefulness – over 20 tons of rock and soil must be “Treated” and then dislodged to produce enough gold for a single ring.

Recently, in the US, the toxic consequences of gold mining were on full display when the Environmental Protection Agency’s incompetence in cleaning out an abandoned gold mine turned the Animas river orange after heavy metal-laden mining waste drained into the river.

Before this tragic accident, the EPA had reported that 40% of Western US watersheds had been permanently contaminated by mining.

Now that gold mining is not as common as it once was in the US, many other countries have been exploited by gold mining firms in its absence.

Mining in Australia is a major industry with gold mining in Western Australia alone generating over $10 billion every year.

Some of the gold mines there have been experiencing a costly and unexpected problem as nature has apparently decided to fight back against its incursions.

Rick Steven, a mine surveyor in the region, said that he had lost nine of his Trimble UX5 drones to eagles, which he labeled “The natural enemy” of drones.

Each of these drones costs an impressive $20,000, meaning that gold mining companies are losing money fast thanks to the eagles’ intervention.