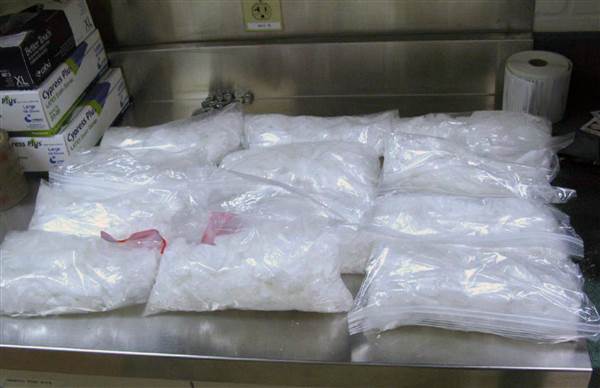 SAN DIEGO – A 25-year-old U.S. citizen has been charged with using a drone to smuggle more than 13 pounds of methamphetamine from Mexico by drone, an unusually large seizure for what is still a novel technique to bring illegal drugs into the United States, authorities said Friday.

Jorge Edwin Rivera told authorities that he used drones to smuggle drugs five or six times since March, typically delivering them to an accomplice at a nearby gas station in San Diego, according to a statement of probable cause.

Border Patrol agents in San Diego allegedly saw the drone in flight on Aug. 8 and tracked it to Rivera about 2,000 yards from the Mexico border.

Authorities say agents found Rivera with the methamphetamine in a lunch box and a 2-foot drone hidden in a nearby bush.

The U.S. Drug Enforcement Administration said in a recent annual report that drones are not often used to smuggle drugs from Mexico because they can only carry small loads, though it said they may become more common.

In 2015, two people pleaded guilty to dropping 28 pounds of heroin from a drone in the border town of Calexico, California.

The biggest advantage for them is that the drone operator can stay far from where the drugs are dropped, making it less likely to get caught.

“The Border Patrol is very aware of the potential and are always listening and looking for drones,” Robinson said.