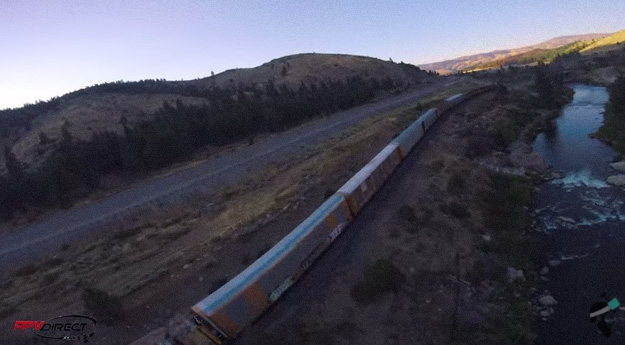 Flying low, through a truss bridge, under a Union Pacific train, and even in a boxcar are just a few of the stunts a drone pilot shows off in a YouTube video while a UP mixed freight is in motion.

The video went live on Sept. 20 and has already received more than 250,000 views as of Friday morning. The recording shows a double-tracked right-of-way bridging a river near a highway. The location appears to be just south of Verdi, Nev., on former Southern Pacific tracks over the Truckee River — also the route of Amtrak’s California Zephyr.

Federal Aviation Administration representatives responded to Trains News Wire‘s request for comment and said that if the pilot were a hobbyist, that person would have to follow local community safety standards such as ones spelled out by the Academy of Model Aeronautics.

“… [T]he relevant part of which says, ‘All pilots shall avoid flying directly over unprotected people, vessels, vehicles or structures and shall avoid endangerment of life and property of others,’” says FAA representative Les Dorr. “A train would qualify as a ‘vehicle.’”

Dorr also cited UP’s drone policy which requires prior written permission from the railroad before a pilot may take off, land on, or fly over UP property. UP’s rules are online. In the video, viewers can see the drone weave between freight cars, come close to the open window of the lead locomotive, fly underneath a hopper car, fly inside a boxcar, and briefly land on top of what appears to be a boxcar roof.

Calls to Union Pacific and the Federal Railroad Administration were not immediately returned.

Robots learn to grab and scramble with new levels of agility

GizmoCrazed - January 16, 2019 0
Robots are amazing things, but outside of their specific domains they are incredibly limited. So flexibility — not physical, but mental — is a...

Would Delivery Drones Be All That Efficient? Depends Where You Live