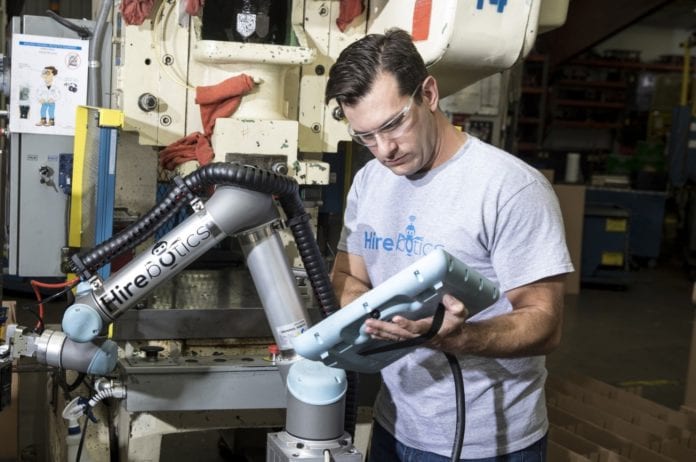 As a result, a new generation of robots was winding up on the floors of small- and medium-size companies that had previously depended only on the workers who lived just beyond their doors.

Companies now could pick between two versions of the American worker – humans and robots.

Counting health insurance and retirement benefits, even the lowest-paid worker was more expensive than the robots, which Tenere was leasing from a Nashville-based start-up, Hirebotics, for $15 per hour.

“How’s everybody doing?” said Matt Bader, as four just-hired workers walked in on a day when Robot 1 was being installed.

Now, as the testing continued on a robot that he said “Just looks like something you see in the damned dentist’s office,” Campbell was starting his 25th consecutive workday feeding claws to the machine.

Robot 2 had a different job than Robot 1.

Days earlier, Annie Larson, the woman who would work alongside Robot 2, had been at home, the end of another shift, laid out in a recliner sipping a Mountain Dew mixed with what she described as the cheapest vodka she could find.

Her line supervisor, Tom Johannsen, had told workers a few weeks earlier the robots were coming.

Eight days after arriving in boxes, the robots’ first official day of work had arrived.

In came the workers, some of whom took a moment to stand near the robots and watch.

Within an hour, the workers of the first shift had filled a shipping box with finished containers – the first batch made by both humans and robots.

In September, the engineers would be coming back, arriving this time with the boxes holding Robot 3 and Robot 4.