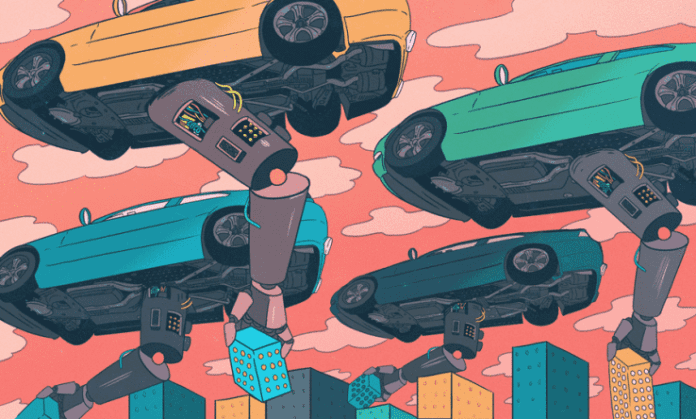 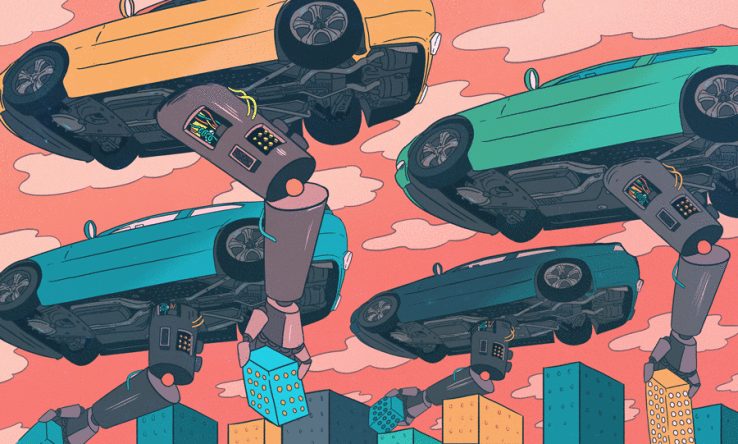 When it comes to startup investment, carmakers are all over the road.

Over the past two years, we’ve seen a massive spike in venture funding by major auto manufacturers. Deal counts are up, more automakers are investing and more big rounds are getting done.

However, an analysis of Crunchbase funding data for the 20 largest global automakers finds wide variance in investment sizes, timing and strategic focus. Some automakers have focused on unicorns and mega-rounds, while others are active at the early stage. Still others have yet to park much capital in startups, illustrating a long-term reticence to engage actively in the venture space.

None of this is especially surprising to industry insiders. Automakers “operate at a different clock speed than the technology industry,” said Chris Stallman, a partner at Fontinalis Partners, a transport-focused venture firm with offices in Detroit and Boston. Five to seven-year vehicle product cycles make startup partnerships difficult because there is uncertainty about whether the company will still be around when a car comes to market.

That said, it’s no secret that automakers have shown more interest in startups lately. Nor is it any secret what’s driving that surge, given the massive shifts the industry faces from the rise of electric cars, autonomous vehicles, ride-hailing services and other emerging technologies and transportation business models.

Below, we set out to quantify combined investment by automakers in startups of all stripes, along with acquisitions, with a focus on how individual automakers compare.

First we look at deal count. Broadly, funding records for the past five years show a dramatic rise in startup investment beginning in 2016 and revving up further in 2017.

In the chart below, we look at the number of disclosed venture and seed rounds with participation by the major automakers. Keep in mind, these are only disclosed rounds, so the actual number of investments may be quite a bit higher, as automakers are known to do stealth deals, as well. 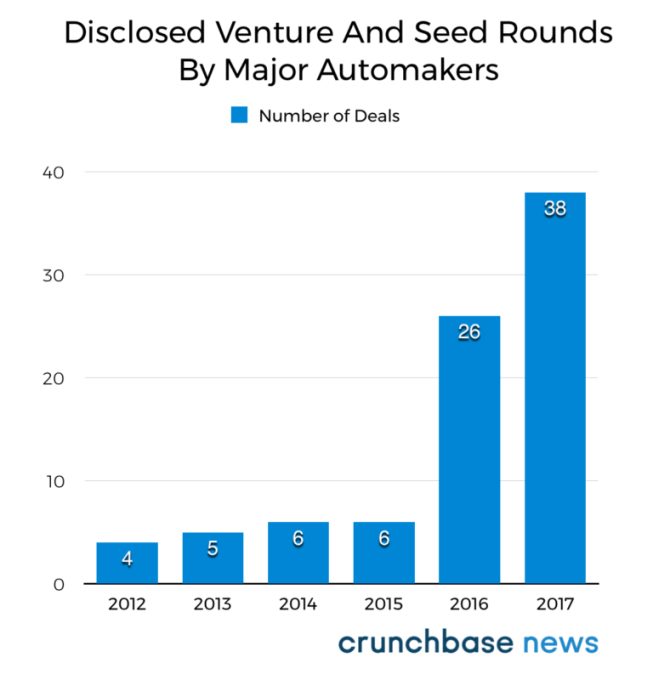 Deal-making isn’t concentrated in any particular sub-sector. We see sizeable rounds, for instance, for Shift, a car-selling platform; ChargePoint, a provider of electric vehicle charging stations; Turo, a provider of peer-to-peer car sharing; StoreDot, a battery developer and Momentum.ai, an autonomous-driving startup.

Car companies aren’t just doing more deals; they’re doing bigger investments. In all, automakers participated in at least eight mega-rounds ($100 million or more) this year, up from zero a few years ago. In the following chart,we look at mega-rounds over the past five years: 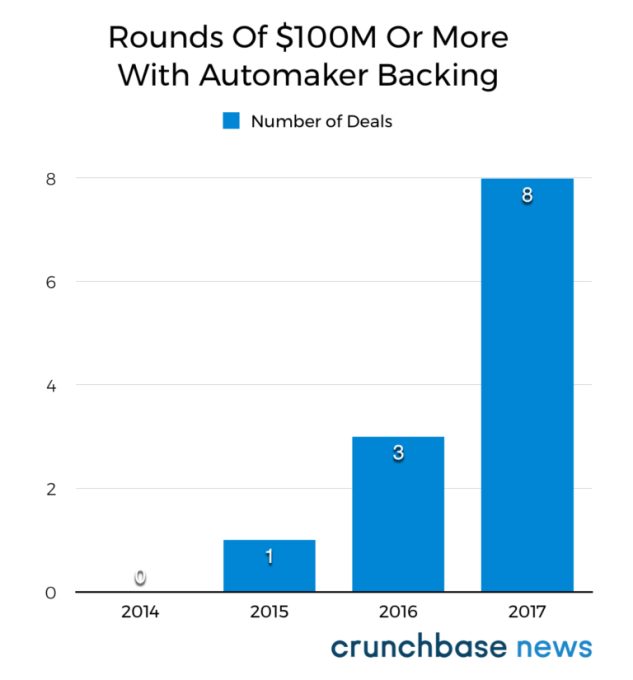 Ride apps have dominated so far this year, with at least four companies in the space securing mega-rounds with automaker participation: Via, Grab, Gett and Careem. Autonomous vehicles were also big, with Nauto and ArgoAI scoring mega-rounds.

While it was a big year for startup investment by automakers, M&A has been slower. That’s not abnormal, as car companies generally don’t buy a lot of startups, although they do the occasional big deal or smaller asset purchase.

So far this year, we haven’t seen any large M&A transactions involving automakers. The most recent large-dollar purchase was GM’s purchase of self-driving technology startup Cruise Automation for $1 billion in 2016.

Whether they opt to partner or acquire, however, automakers are cultivating more relationships with startups, Stallman told Crunchbase News. The global recession of 2008-2009 required heavy cuts to R&D for many struggling automakers, and in the last couple of years they’ve been playing catch-up. Bringing in an outside startup can be a good way to speed up internal efforts.

How the biggest automakers stack up

Not everyone’s operating at the same speed, however. Some automakers like venture investing a lot more than others.

Looking at deal count, Germany’s BMW was the most active automaker by a wide margin, with more than 30 disclosed investments since 2012, including 10 so far this year. A majority are through its corporate fund, BMW iVentures, which invests across multiple sectors, including autonomous driving, electric vehicles, AI and automotive cloud technology.

Although most deals are Series A or B, BMW i Ventures invests across stages, and many of its early-stage rounds are quite large. This summer, the fund participated in a $38 million Series C for Shift, and a $159 million Series B for Nauto, a developer of AI-enabled camera technology for automotive fleets.

Germany’s Daimler was also quite active in 2017, with eight investments, including participation in two mega-rounds for two ride apps, New York-based Via and Dubai-based Careem.

In the chart below, we look at the number of disclosed investments since last year by major automakers: 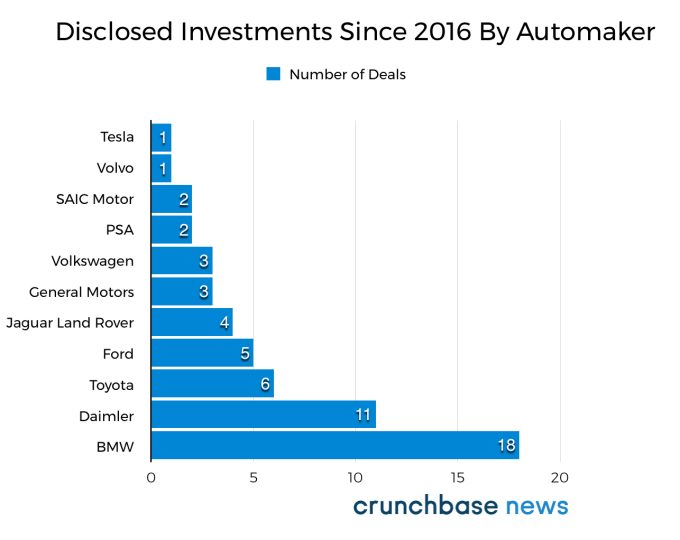 A few automakers have so far stayed out of startup investing. Fiat Chrysler, in particular, has been reticent to invest, although a recent self-driving car partnership with Google demonstrates an interest in partnering with Silicon Valley companies. Nissan and Mazda have also shown little appetite for VC.

Looking ahead, it’s not far-fetched to presume that the momentum for startup investing among automakers will continue. If anything, signs point to further acceleration, with Toyota recently unveiling a $100 million AI-focused venture fund and Ford scaling up its tech-focused Ford Smart Mobility division.

Moreover, if any industry’s investment activities are going to follow Newton’s first law of thermodynamics, it ought to be transportation.

GizmoCrazed - January 9, 2018 0
For the past several years, Nenad Bursac has been trying to make muscles from scratch. A biological engineer at Duke, Bursac came close in 2015,...

Amazon is testing a Spanish-language Alexa experience in the US ahead...