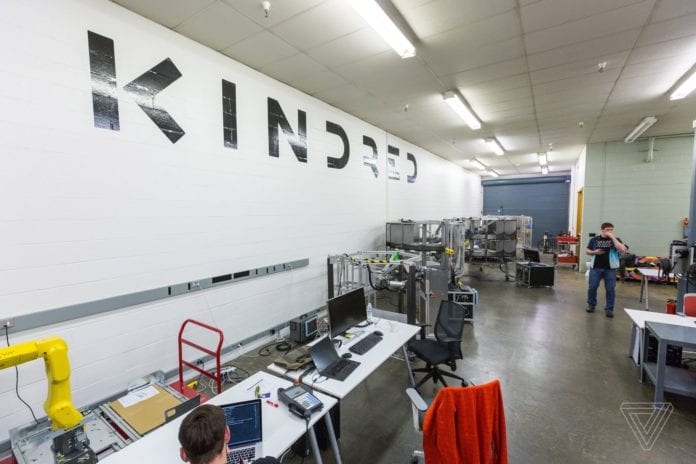 Ask Geordie Rose and Suzanne Gildert, co-founders of the startup Kindred, about their company’s philosophy, and they’ll describe a bold vision of the future: machines with human-level intelligence.

More intriguing than this prediction is Kindred’s proposed path for achieving it.

Unlike some of the most cash-flush corporations in Silicon Valley, Kindred is focusing not on chatbots or game-playing programs, but on automating physical robots.

Gildert, a physicist who conceived Kindred in 2013 while working with Rose at quantum computing company D-Wave, thinks giving AI a physical body is the only way to make real progress toward a true thinking machine.

Rose, who co-founded D-Wave in 1999, stepped back from his role as chief technology officer to work on Kindred with Gildert.

Because so many warehouse workers today spend a significant amount of time sorting products and scanning barcodes, Kindred developed a robotic arm that can do some elements automatically.

Kindred is now focused on getting its finished Orb into warehouses, where it can begin learning at an accelerated pace by sorting vastly different products and observing human operators.

Because the US shipping marketplace is already rife with single-purpose robots, thanks in part to Amazon, there are plenty of opportunities for humans to train AI. Finding, handling, and sorting products while maneuvering in a fast-moving environment is a data gold mine for building robots that can operate in the real world.

Kindred is working toward what’s known as artificial general intelligence, or software capable of performing any task a human being can do.

Kindred thinks our physical body is intrinsic to the secrets of human cognition. This is the fundamental challenge of AGI; how to create an intelligent system, the kind we know only from science fiction, that can truly learn on its own without needing to be fed thousands of examples and trained over the course of weeks or months.

For Kindred’s founders, the quest to crack the secret of human cognition can’t be separated from our physical bodies.

Other than Kindred, work on AI and embodied cognition mostly happens in the research divisions of large tech companies and academia.

Kindred has already automated the process of lifting the object in the air, scanning the barcode, and sorting it into the necessary bin.

Using the Orb resembles operating a video game version of a toy claw machine “In any gigantic warehouse, people have to walk around and pick up things,” says George Babu, Kindred’s Chief product officer.

Kindred is quick to recognize Amazon’s prowess in this department.

Kindred’s system, on the other hand, is designed to integrate into existing warehouse tools.

Last month, Kindred finished its first deployable devices, and it “Created more demand than we anticipated,” according to Jim Liefer, Kindred’s Chief operating officer, though he won’t disclose any initial customers.

Max Bennett, Kindred’s robotics product manager, says that the process is designed so that human warehouse workers can operate multiple Orbs simultaneously, gripping objects and letting the software take the reins before cycling to the next setup.

Kindred imagines future versions of the robotic arm being affixed to sliding overhead rails or maybe even to bipedal robots that roam the floor.

Kindred is unique in the AI field not just for its robotics focus, but also because it’s diving head first into the industrial world with a commercial product.

Many of the big tech companies working on AI are doing so with huge research organizations, like Facebook AI Research and Google Brain.

“The answer is that you have to create a real business that is cash-flow positive very early.” Kindred has raised $15 million in funding thus far from Eclipse, GV, Data Collective, and a number of other investors.