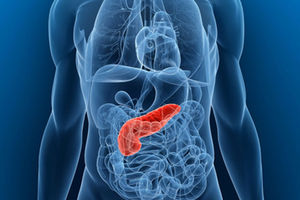 A new blood test that detects pancreatic cancer in its early stages may reduce the deadliness of the disease.

Pancreatic cancer is known as the “Silent killer” because it is usually too advanced to treat by the time symptoms arise.

The only way to treat pancreatic cancer is to completely remove it before it spreads.

Currently, the best screening tool we have for detection is an ultrasound and it’snot that great.

Tony Hu at Arizona State University in Tempe and his colleagues have developed a blood test that could spot pancreatic cancer before it spreads.

In a pilot study of 59 people with the disease, the test picked up early-stage pancreatic cancer in more than 90 percent of cases.

The study also involved 48 healthy people and 48 people with pancreatitis, an inflammatory condition that can be difficult to distinguish from pancreatic cancer using existing methods like ultrasound.

Hu and his colleagues developed gold nanoparticles that selectively bind to these cancer vesicles in blood samples.

Upon binding, the nanoparticles change their light-emitting properties, signaling the presence of pancreatic cancer.

If the test is approved, it will be the only blood test available for the diagnosis of pancreatic cancer.

Hu hopes it could one day be used for large-scale screening for pancreatic cancer, similarly to mammograms for breast cancer and pap smears for cervical cancer.