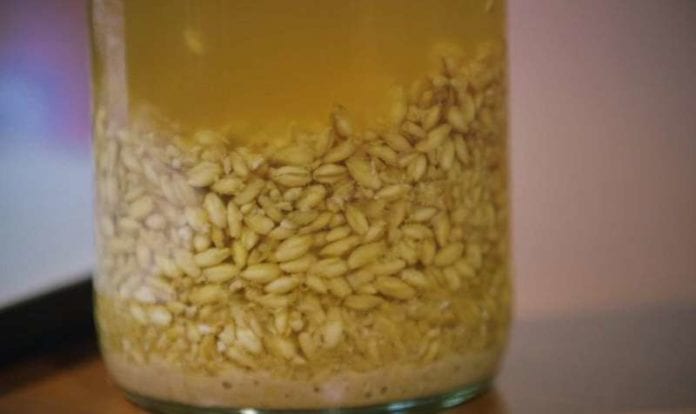 A collection of plastic-covered glass beakers and water bottles filled with yellow, foamy liquid stood in front of them on the table, at the end of which sat Li Liu, a professor of Chinese archaeology at Stanford.

As the students removed the plastic covers, they crinkled their noses at the smell and sour taste of the odd-looking concoctions, which were the results of their final project for Liu’s course Archaeology of Food: Production, Consumption, and Ritual.

One of the experiments imitated a 5,000-year-old beer recipe Liu and her team revealed as part of published research last spring.

“Trying to imitate ancient behavior and make things with the ancient method helps students really put themselves into the past and understand why people did what they did.”

Liu, together with doctoral candidate Jiajing Wang and a group of other experts, discovered the 5,000-year-old beer recipe by studying the residue on the inner walls of pottery vessels found on an excavated site in northeast China.

The research, which was published in Proceedings of the National Academy of Sciences, provided the earliest evidence of beer production in China so far.

The ancient Chinese made beer mainly with cereal grains, including millet and barley, as well as with Job’s tears, a type of grass in Asia, according to the research.

Liu said she was particularly surprised to find barley, which is used to make beer today, in the recipe because the earliest evidence to date of barley seeds in China dates to 4,000 years ago.

The ancient Chinese beer looked more like porridge and likely tasted sweeter and fruitier than the clear, bitter beers of today.

At the end of Liu’s class, each student tried to imitate the ancient Chinese beer using either wheat, millet or barley seeds.

Alongside that experiment, the students tried to replicate making beer with a vegetable root called manioc.

Madeleine Ota, an undergraduate student who took Liu’s course, said she knew nothing about the process of making beer before taking the class and was skeptical that her experiments would work.

Her manioc beer smelled like funky cheese, and Ota had no desire to check how it tasted.

“The beer that students made and analyzed will be incorporated into our final research findings,” Wang said.

Ota, a junior who is double majoring in archaeology and classics, and other students praised Liu’s class for giving them an important hands-on view into the ancient world.