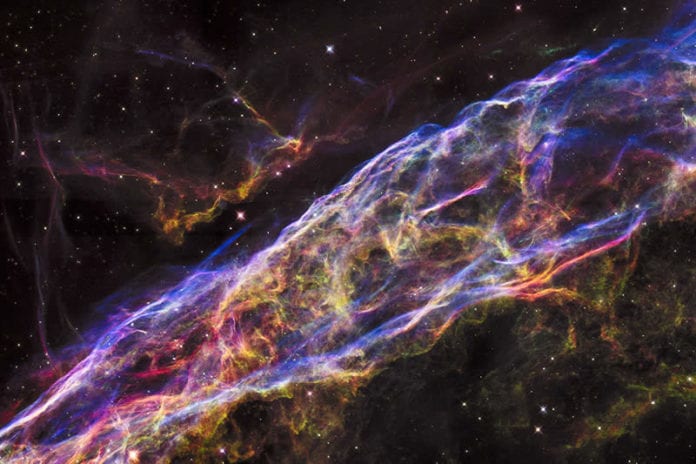 The big big bang happened 13.7 billion years ago and created all that we know and see today.

Space is an amazing place. One can lose hours just sitting and pondering our origins. How did it all begin? Where did it all come from?

Current theory is the big bang, whereby all matter and energy was consolidated into a single point, perhaps no bigger than a pencil dot on a piece of paper. Somehow a tipping point was reached, and the point expanded forcefully, at many times the speed of light, for perhaps a second or two. At that point the universe was perhaps only a few light years across. It was made of energy. Soon after, as expansion continued at unthinkable rates, the energy cooled and began to convert to matter particles of some sort. It is believed that there was no light until about 300,000 years into the expansion. At that point, much matter had formed into positive and negative charged particles, which joined and formed hydrogen atoms.

These atoms began to cluster, and eventually formed pockets denser in matter, and holes of not much matter between them. As the clumps began to cling to each other, extremely large groupings occurred. When those groupings reached immense size, many times larger than our sun, the intense pressure and heat in the center caused fusion to occur. The stars burst into light as the fusion reaction gave light as a product. The fusion created helium. Now hydrogen and helium do not make a universe of anything but stars.

What eventually happens is the core turned into more and more helium, which is heavier, and the increased weight crushing down caused the helium to begin fusing, creating heavier atoms. In turn, with time, perhaps on the order of 100 to 900 million years, things were forming in the core that were heavier and heavier. Eventually iron was reached, at which point the star is doomed. When iron had formed the gravity of the core was so strong it almost instantly pulled in the outside of the star and crushed it all into the core.

At that point the heat and pressure overcame the gravity, and the whole thing exploded out into the universe. Right before that explosion many heavier items were formed in the core, all the way up the periodic table. What formed was based on the size of the star before exploding. What also depended on the size of the original star was what was left. the biggest ones left behind enormous black holes, while lesser ones might leave pulsars or quasars or various other husks. Now we are getting somewhere.

All the matter tossed out by the exploding star into a cloud of gas and particles began its own combining process. This time most elements on the periodic table were represented. The largest clumps would form new stars, and the planets that orbit them. The planets now would have the elements needed to form solid surfaces, as well as contain the elements needed to form organic life and water and what we use for technology.

Everything around you, and you, is a product of the original stars exploding. Those new solar systems would gather around the gravity of black holes, forming huge clusters known as galaxies. Galaxies gather to form “groups” and so on, forming a pattern that closely resembled the layout of the early universe. The exploding of stars, and the combining of the remnants into new suns and planets still goes on today, although taking much longer and not forming any stars the size of the originals. And here we are…