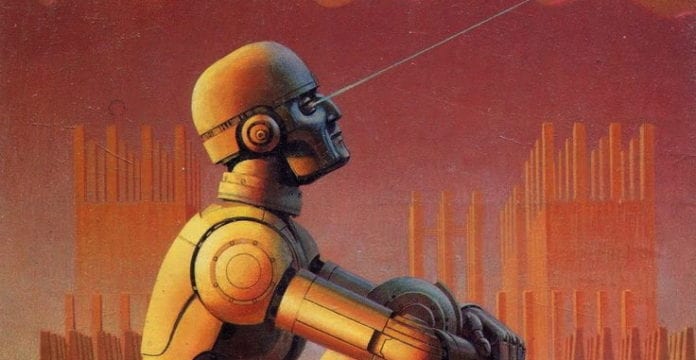 Coined by the science fiction author Isaac Asimov in 1968 in his “Three Laws of Robotics” book; the term refers to the science that studies the conception, design, manufacturing, and operation of robots.

It is a branch of engineering science which overlaps, and cannot exist without, electronics, computer sciences, mechatronics, nanotechnology and artificial intelligence.

Let’s talk a little about history.

The first robot is said to have been designed by George Devol in 1954.

It was called Unimate and it’s linked to the development of Artificial Intelligence, patented by Devol himself in 1961.

But robotics history takes flight earlier than that.

As we all know, Leonardo Da Vinci was more than a painter.

He was an inventor, a military engineer, a mathematician, an architect, a man who studied the science of nature.

Before working on the “The Last Supper”, he designed the first humanoid robot.

Later, in the movie “Metropolis”, María was the first robot depicted on the screen.

Today, we can say that Devol’s first programmable and digitally operated robot, paved the way to the robotics industry we all know today.

The uses for robots are countless.

The use of robots has become so widespread that it can be difficult to pinpoint which goes first.

Let’s mention those uses in a random order instead.

Robotics is widely related to the population mostly with science but the use of robots goes far.

Robots are used in medicine now as surgeons use them to aid in the performing of surgeries, especially in micro-surgeries where a substantial amount of precision is required but hardly achieved by the bare human hand.

A related field where they are widely applied is in the clinical laboratory where analyzers have been developed using robotic arms to deliver exact amounts of samples and reagent to perform the analyses to human fluids to aid doctors in the diagnoses of illnesses.

And it is widely known now how robotics has been applied in the prosthetic field, allowing not only grannies with their knee replacements but helping high-performance athletes achieve what was impossible before.

Robotics is applied in the manufacture of a variety of products from cars, electronics, to home appliances.

They are also used in the military field.

If Leonardo were alive he would not believe the military equipment that exists today; hardly comparable to those he designed for Ludovico Sforza.

Another field where we are seeing robots more and more these days is entertainment.

Who doesn’t know Disney’s Animatronics, where robots are spread along the amusement parks we all love to visit from time to time?

They are used in the development of films, especially those with a lot of special effects and as the protagonist of many of those films and animations as the well-known “Transformers” or the legendary “Mazinger Z. Don’t forget the toy industry, where the unpopular Tesla boat can be popular among children.