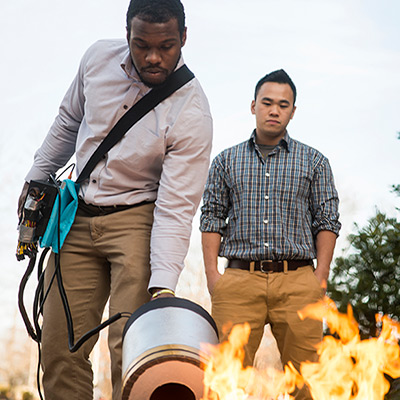 A new type of extinguisher that uses sound waves to put out fires has been created by two engineering students at Mason George University. Both chemical and water-free, the invention offers a relatively non-destructive method of fire control.

While the concept of using sound waves to extinguish flames is not new, previous attempts to realize the principle; including efforts by teams at West Georgia University and the US Defense Advanced Research Projects Agency (DARPA), had not been successful.

Undeterred by this, as well as initial skepticism from their peers and faculty, Seth Robertson, and Viet Tran, now alumni of George Mason University in Virginia, elected to explore the concept, developing a series of prototype sonic extinguishers for a research project.

The principle behind the extinguisher is simple: as they are mechanical pressure waves that cause vibrations in the medium in which they travel, sound waves have the potential to manipulate both burning material and the oxygen that surrounds it.

Tran and Robertson explored the impact of different frequencies of sound on small fires. Ultra-high frequencies had little effect, but lower, bass frequencies – between 30 and 60 Hz – produced the desired extinguishing effect.

Consisting of an amplifier and cardboard collimator to focus the sound, the duo’s final extinguisher prototype cost them only about $600 to develop and is a hand-held, 9 kg device with the capacity to quickly put out small alcohol-fueled fires.

Having acquired a preliminary patent application for the design, the researchers are now hoping to move onto further testing and refinements of their extinguisher, with the aim of taking steps towards a potential commercial application.

Originally, Robertson and Tran envisaged their device as ideal for use on small fires in the home but are now investigating the possibility of applying the principle to broader applications.

One possible use could be in space, where traditional extinguishing agents are hard to focus on a target fire. “Fire is a huge issue in space,” says Tran. “In space, extinguisher contents spread all over the place. But you can direct sound waves without gravity,” adds Robertson.

The duo’s work could potentially be applied to “swarm robotics where the device would be attached to a drone”, to be used in situations such as large forest fires or urban blazes, thereby improving safety for firefighters.