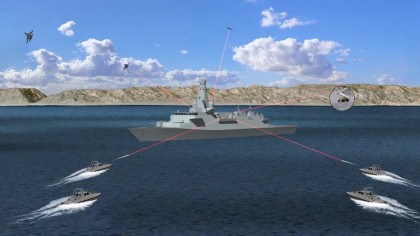 The United Kingdom’s Ministry of Defense is finalizing the agreement of a £30M contract with UK DRAGONFIRE, a UK industrial team led by MBDA, to conduct the Laser Directed Energy Weapons Capability Demonstrator.

UK DRAGONFIRE will achieve, through the Laser Directed Energy Weapons Capability Demonstrator, a significant step-change in the UK’s capability in High Energy Laser Weapon Systems and will provide the basis for technology-driven operational advantage.

The program will mature the key technologies for a high energy defensive laser weapon system and will include the engagement of representative targets in land and maritime environments in 2019.

UK DRAGONFIRE is a collaborative consortium led by MBDA with QinetiQ and Leonardo-Finmeccanica that has brought together the best of relevant UK industry expertise to deliver the highly challenging and complex program.

The team also capitalizes on the strengths of the individual companies involved, which includes GKN, Arke, BAE Systems and Marshall ADG.

Dragonfire is one of the systems being developed under the MoD’s £800m Innovation Fund, which aims to tap British ingenuity to give the UK military an advantage in battle and new capabilities by using advanced technology.

Dave Armstrong, MBDA technical director, said: “Dragonfire will put the UK at the forefront of high energy laser systems, capitalizing on the joint experience of the MoD and industry in the complex weapons environment.”