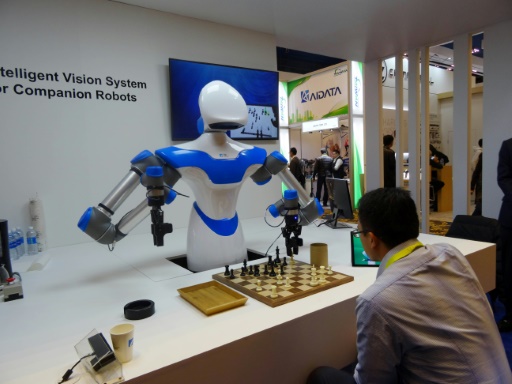 Engineers in Taiwan have developed a robot that can move chess pieces on a board against an opponent and pour coffee, but the poor fellow is bored and he’s looking for a real job.

The robot played games against opponents and can see its environment better and act with greater precision than its peers can.

The robot can perform a variety of tasks in manufacturing and service industries with this enhanced vision.

Playing chess is simply a hobby used to display the robot’s visual acuity.

Lewis Liu, ITRI’s division director explains that the vision system can distinguish between objects and their location with greater accuracy than other robots.

A robot having these capabilities could, for example, do household tasks such as assisting disabled people or seniors with meal preparation or setting or clearing a table.

In the industrial arena, it would be able to adapt to new situations better than other robots can.

The ability was demonstrated by the robot at CES pouring coffee for its chess opponents, regardless of where their cup was placed.

The ITRI robot is among several others exhibited at the Las Vegas technology show with enhanced artificial intelligence resulting in new skills.

According to Liu, the institute is not commercializing the robot.