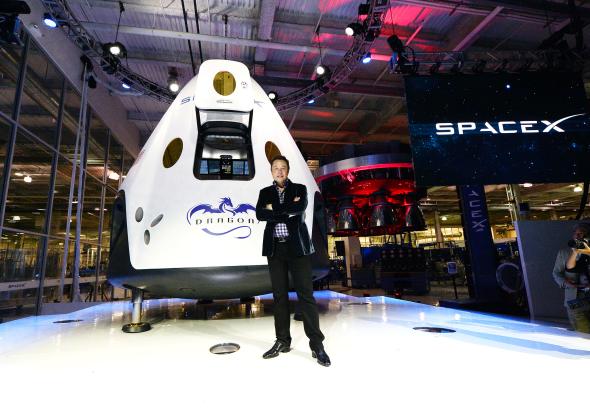 In perhaps the most eagerly anticipated aerospace announcement of the year, SpaceX founder Elon Musk has revealed his grand plan for establishing a human settlement on Mars.

Not too long after that perhaps 40 or a hundred years later, Mars could be home to a self-sustaining colony of a million people.

“The future of humanity is fundamentally going to bifurcate along one of two directions: Either we’re going to become a multiplanet species and a spacefaring civilization, or we’re going be stuck on one planet until some eventual extinction event,” Musk told Ron Howard during an interview for National Geographic Channel’s MARS, a global event series that premieres worldwide on November 14.

Though he admitted his exact timeline is fuzzy, Musk thinks it’s possible humans could begin flying to Mars by the mid-2020s.

The rocket would deliver the crew capsule to orbit around Earth, then the booster would steer itself toward a soft landing back at the launch pad, a feat that SpaceX rocket boosters have been doing for almost a year now.

Next, the booster would pick up a fuel tanker and carry that into orbit, where it would fuel the spaceship for its journey to Mars.

“We’d ultimately have upward of a thousand or more spaceships waiting in orbit. And so the Mars colonial fleet would depart en masse,” Musk says.

By his calculations putting a million people on Mars could take anywhere from 40 to a hundred years after the first ship launches.

After landing a few cargo-carrying spacecraft without people on Mars, starting with the Red Dragon capsule in 2018, Musk says the human phase of colonization could begin.

For now, Musk plans to continue developing supersonic retrorockets that can gradually and gently lower a much heavier spacecraft to the Martian surface, using his reusable Falcon 9 boosters as a model.

The first journeys would primarily serve the purpose of delivering supplies and establishing a propellant depot on the Martian surface, a fuel reservoir that could be tapped into for return trips to Earth.

The earliest interplanetary spaceships would probably stay on Mars, and they would be carrying mostly cargo, fuel, and a small crew: “Builders and fixers” who are “The hearty explorer type,” Musk said to Howard.

While there will undoubtedly be intense competition and lots of fanfare over the first few seats on a Mars-bound mission, Musk worries that too much emphasis will be placed on those early bootprints.

In short, his vision for establishing a settlement on Mars is more an endurance sport than a sprint.

With an accumulated fortune from his time at Paypal, Musk founded a company dedicated to building rockets and vastly improving the vehicles that form the foundation of an interplanetary journey.

Contracts with private clients and the U.S. government followed, and now SpaceX is working on a version of its Dragon capsule that can send humans to the International Space Station.

Over the years, the company has had many high-profile successes-including landing the first suborbital reusable rocket stages on land and at sea and its share of failures, with rockets exploding on the launch pad or en route to orbit.

Putting humans on Mars is a completely different challenge from sending humans into orbit, or even to the moon, especially when the goal isn’t just a few casual trips.

“We don’t want to send a few people, a few missions to Mars and then never go there again. That will not accomplish the multi-planetary goal.”

Musk’s ultimate vision of a second, self-sustaining habitat for humans in the solar system is grand and lofty, but by no means unique.

“Entrepreneurs are able to look at questions that we think about, but we’re not quite ready to go there yet, things like supersonic retrograde propulsion,” said NASA administrator Charlie Bolden during a panel at the IAC. “I think we can quibble over the numbers and the dollars and the timeframes and all, but we shouldn’t lose the fact that this guy went out on the international stage today and just laid it all out on the line,” Braun adds.

For Mars to be a viable destination, Musk says the cost of the trip needs to come down to about $200,000, or the average price of a house in the United States.

Reaching Mars in the 2020s will require a bit of a kick in the pants for SpaceX on the technology front.

If humans do manage to touch down on Mars, Musk thinks the momentum from such an achievement will propel additional developments, just as early explorers searching for glory, gold, and spices drove improvements in ship technology and global industry.

Ultimately, Musk believes this kind of endeavor will bring Mars out of the realm of science fiction and transform it from a world fraught with difficulty and danger to one that humans might actually enjoy living on-including Musk.

A Virus That Could Help You Lose Weight [STUDY]

GizmoCrazed - May 7, 2011 0
Yes You Read It Right!! Scientists could use a virus to interpolate your brain to make you feel less hungry, a new study reveals. A...