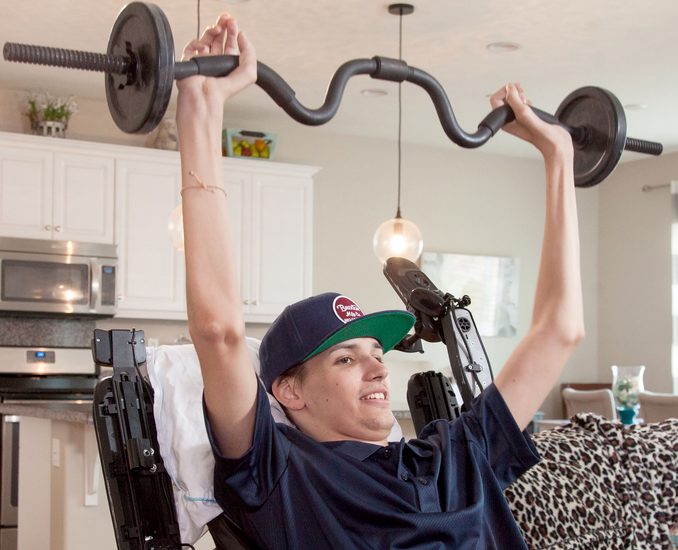 Doctors at the USC Neurorestoration Center and Keck Medicine of USC injected an experimental treatment made from stem cells and other cells into the damaged cervical spine of a recently paralyzed 21-year-old man as part of a multi-center clinical trial.

Three months later, he’s able to feed himself, use his cell phone, write his name, operate a motorized wheelchair, and hug his friends and family.

Improved sensation and movement in both arms and hands also make it easier for Kris to care for himself, and to envision a life lived more independently.

“With this study, we are testing a procedure that may improve neurological function, which could mean the difference between being permanently paralyzed and being able to use one’s arms and hands. Restoring that level of function could significantly improve the daily lives of patients with severe spinal injuries.”

“In Kris’ case, two spinal cord levels means the difference between using your hands to brush your teeth, operate a computer, or do other things you wouldn’t otherwise be able to do, so having this level of functional independence cannot be overstated.”

The pioneering surgery is the latest example of how the emerging fields of neurorestorative and regenerative medicine may have the potential to improve the lives of thousands of patients who have suffered a severe spinal cord injury.

Keck is one of six sites in the U.S. authorized to enroll subjects and administer the clinical trial dosage.

To qualify for the clinical trial, enrollees must be between the age of 18 and 69 and their condition must be stable enough to receive an injection of AST-OPC1 between the fourteenth and thirtieth days following injury.

The stem cell procedure is part of a Phase 1/2a clinical trial that is evaluating the safety and efficacy of escalating doses of AST-OPC1 cells developed by Asterias Biotherapeutics.

AST-OPC1 cells are made from embryonic stem cells by carefully converting them into oligodendrocyte progenitor cells, which are cells found in the brain and spinal cord that support the healthy functioning of nerve cells.

All are critical factors in the survival, regrowth, and conduction of nerve impulses through axons at the injury site in the “SCiStar” clinical trial according to the researchers.