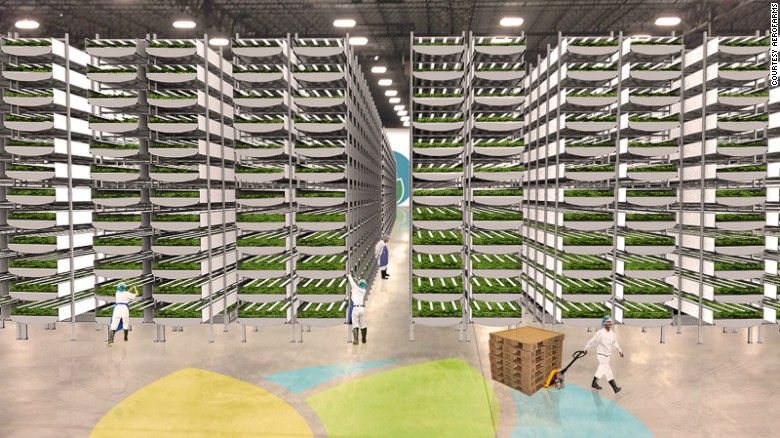 The world’s largest, and possibly most sophisticated indoor farm, where greens grow without the sun, soil or water.

AeroFarms, the company behind the venture, say they will use 95% less water than a conventional outdoor farm.

Set to open in September in Newark, New Jersey, the 69,000-square-foot farm will be hosted in a converted steel factory.

It combines a technique called “Aeroponics”, like hydroponics, but with air instead of water, with rigorous data collection, which will help these modern farmers figure out optimal conditions for growth.

The goal? To produce tall, handsome, tasty baby greens and herbs such as kale, watercress, and basil.

This will be the largest farm of its kind in the world in terms of production capacity: 2 million pounds of greens a year, according to Aerofarms founder David Rosenberg.

The world’s population will hit 8.5 billion by 2030, according to UN estimates, meaning many more mouths to feed.

Rosenberg says innovation is urgently needed to feed everyone, and urban farming might be part of the solution.

“We are building this company to be wildly impactful. Not just to build a few farms, but to change the world.”

Inside the farm, there are no natural seasons, nights or days.

The company says their method is superior to more commonly used indoor farming techniques like aquaponics and hydroponics, which require much more water, and that the plants taste the same, or even better than their conventionally grown counterparts.

To make sure the greens have everything they need, the company collects data from the plants to create algorithms for growth.

Their farms are partly run on renewables such as solar power, but what really gets the carbon footprint down is bypassing extensive transportation of the produce by only selling the greens to local markets, shops and restaurants.

“We have had some request to go nationwide. It’s tempting, but seems counter to our mission of locally produced food,” Rosenberg says.

In addition to ultra-low water usage, not using any soil further reduces the environmental impact.

The crops are currently sold at a 20% premium, similar to organic and locally produced food, but because no soil is involved, they cannot get an organic certification, although some retailers consider them to be beyond organic, Rosenberg explains.

“I think we are going to have a bigger and bigger impact on leafy greens and other crops in the future. And the future is going to be very different, in large part because of data.”