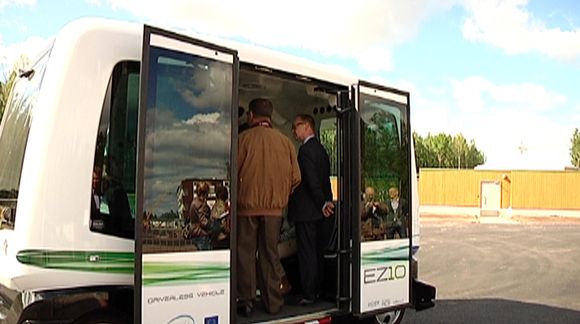 Commuters and motorists will have to get used to seeing a pair of driverless mini-buses negotiating traffic in the area as the city tests the robot vehicles through mid-September.

“This is an immense deal right now. There’s no more than a handful of these kinds of street traffic trials taking place, if that,” said project test lead and Metropolia University of Applied Sciences project manager Harri Santamala.

In addition to Metropolia, several other players working in traffic automation are also involved in the pilot.

While Helsinki may be one of the first cities in the world to let loose the robot buses on the streets, it is not the first Finnish city to do so.

Last year neighbouring Vantaa rolled out similar vehicles during its housing fair, although they only operated on routes shut off from other traffic at the time.

By contrast, Santamala considers the test track in Hernesaari to be a challenging traffic environment, because it is constantly changing.

Motorists who may be prone to road rage will also have to keep their cool navigating traffic alongside, or behind, the robot buses, whose average speed is about ten kilometres an hour.

“Their purpose is to supplement but not to replace it. For example, the goal could be to use them as a feeder service for the high-volume bus or metro traffic, like Kutsuplus. In other words, the mini-bus would know when the connecting service is coming, and it would get you there on time,” he explained.

The service was in operation for just a year and a half before Helsinki Regional Transport pulled the plug at the end of last year, citing excessive costs in light of the low passenger volumes.