Fitness trackers have become some of the more popular types of wearable technology in recent years, but engineers at the University of California, Berkeley want to take the concept one step further by developing minuscule, wireless sensors to monitor a person’s internal health.

These devices would be approximately the same size as a grain of dust and would be implanted into a person’s body, where they would provide real-time monitoring of organs, muscles, and/or nerves, the researchers explained in the August 3 edition of the journal Neuron.

The devices, which have already been implanted in the muscles and peripheral nerves of rats, use ultrasound both as a source of power and as a way to read the collected data.

The crystal converts ultrasound vibrations emanating from outside a person’s body into electricity, which is used to power a tiny transistor on the device which is in direct contact with a nerve or muscle fiber, the study authors explained. 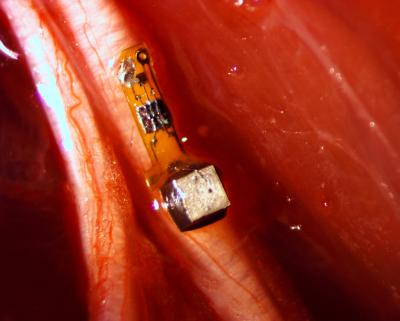 Voltage spikes in the tissue are causing a change in the circuit and the vibration of the crystal, which in turn changes the echo detected by the ultrasound receiver.

Since ultrasound technology is standard in hospitals and the vibrations waves can penetrate most parts of the body, it seemed like a natural fit.

As co-lead author Michel Maharbiz, an associate professor of electrical engineering and computer sciences at UC-Berkley, noted in a statement, “I think the long-term prospects for neural dust are not only within nerves and the brain, but much broader.”

“But now I can take a speck of nothing and park it next to a nerve or organ, your GI tract or muscle, and read out the data.”

To test out their devices, Maharbiz and Carmena powered up the sensors using six 540-nanosecond ultrasound pulses delivered once every 100 microseconds.

This provided them with continual readouts from the device in real-time.