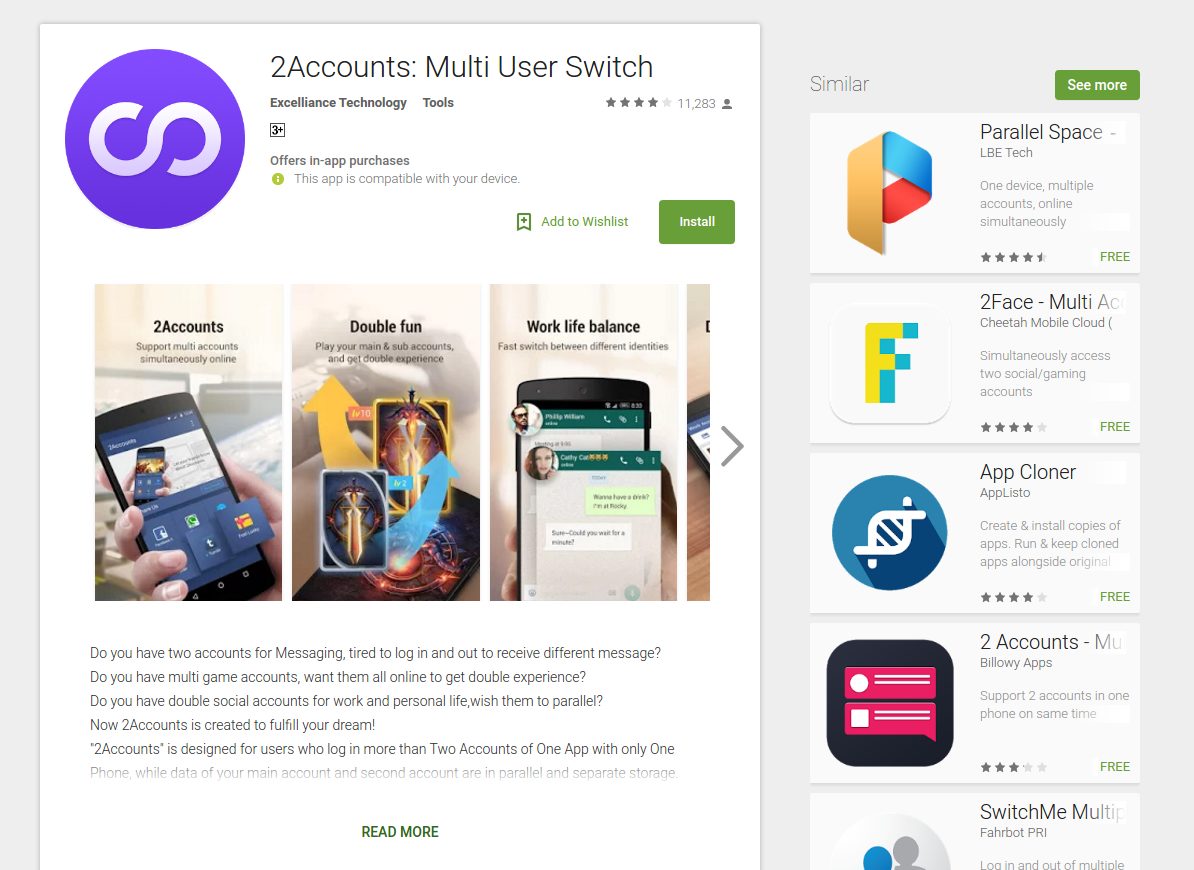 Some of you might be having a hard time switching accounts in your apps. You have to log out first before you can switch to another profile or another Facebook account. Well, using these ten apps might help you in handling all your social media accounts in just one app.

2Accounts allows you to log in two or more accounts of one application and ensures no conflict between your accounts. You do not have to log in or log out just to switch accounts.

2Accounts doesn’t only support social media sites, but also games, yes games! They support 99% of the top games in the Google Play store. One thing that is best in this app is its instant messaging, clean user interface and the data of your main and second account is in parallel and separate storage.

This application is one of the top Android tools that lets you switch different accounts on your device with just one tap. It is also designed for gaming and social networking sites. It supports almost all the apps. The best feature for this is that you can protect the application’s privacy by hiding it using the Incognito Installation feature. Parallel Space is stable and has a user-friendly interface.

MultiAccounts allows you to switch and use multiple accounts in one device. The application is easy to use and supports most of the popular apps like Facebook, Snapchat, KakaoTalk, WhatsApp, Line and so on. In MultiAccounts, the privacy of every account is safe and nothing to worry about. One disadvantage is that you need to root your device before you can use the app.

Unlike the other apps mentioned above, App Cloner lets you clone your existing applications. This is useful when you are simultaneously using multiple login apps like Facebook, Twitter, and Skype.

Add sub-accounts on your social network, messaging and gaming applications with just one tap using 2Face. You can instantly switch accounts within the app or through the notification bar. The app can also clone existing apps on your device.

With SwitchMe, you can create different user profiles for your mobile phone just like a desktop with its settings. The app includes a lock screen where you can login or logout without the access to the desktop. The app needs to be rooted, and you have to follow the app’s guidelines which are listed on Google Play.

Using Tweetdeck, you can manage four social networking sites: Twitter, Facebook, Foursquare, and Buzz. But some features of the listed sites, such as uploading photos on Facebook, are not included in the app. The app is not available in Play Store but here’s the mirror site.

Through this app, you can log in different Facebook accounts. It displays a better interface and has push notifications. Most of the features of Facebook are available here like status updates, photos, messages, check-in, etc. Though Friendcaster is not available in Play Store, you can download it from a mirror site.

The application lets you manage multiple accounts such as Facebook, Twitter, Foursquare and more. If you have something in mind or something to post, let’s say a status, but you want to publish it later or on a particular day or time, you can set the schedule for it. You can also Check-in to Foursquare using this app. One disadvantage is that you can only add up to 3 social networking sites in the free version of the app.

Author Bio:
Christine de Guzman is a freelance writer for MyOptimind, a company in the Philippines that develops mobile apps, SEO, and web design. They also develop one of the best productivity apps for salespeople. Aside from being a freelancer, she also loves to travel out of town and keeps herself updated with current technology. Follow me on Google+.