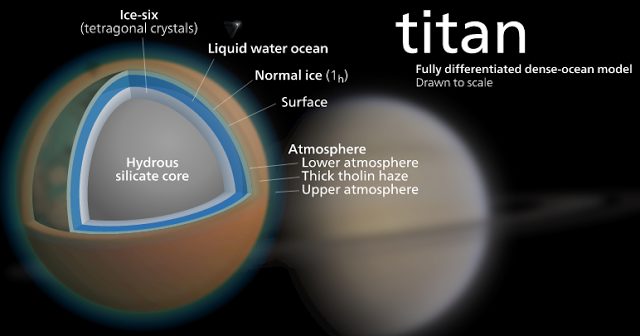 A team of researchers at Cornell University has built and run a simulation that showed prebiotic reactions could occur on the surface of one of Saturn’s moons, Titan, suggesting the possibility of life evolving in a place where it is too cold for water to be a factor.

The team describes the simulation they created in response to the discovery that polymers such as polyimine might have already developed on the moon’s surface.

Recent evidence has suggested that some chemical reactions could lead to types of life forms where there is no water, which further suggests that it may exist outside of what is now considered the habitual zone.

For life to come about in such places, researchers reason, there would likely need to be some action going on, and that is why there has been so much focus on Titan; it is the only object in our solar system, besides Earth, that has both rainfall and erosion due to liquid movement.

PNAS – Polymorphism and electronic structure of polyimine and its potential significance for prebiotic chemistry on Titan.

Titan is the only place in the solar system, except Earth, where rainfall and seasonally flowing liquids erode the landscape.

This makes Titan a test case for exploring the environmental limits of prebiotic chemistry and addressing the question of whether life can develop without water.

Experimental and observational data suggest that hydrogen cyanide, the most abundant hydrogen-bonding molecule in Titan’s atmosphere, may polymerize on the surface to polyimine.

Using quantum mechanical calculations, we show that polyimine has unusual electronic and structural properties that could potentially facilitate prebiotic chemistry under cryogenic conditions akin to those on Titan.

The chemistry of hydrogen cyanide is believed to be central to the origin of life question.

Contradictions between Cassini-Huygens mission measurements of the atmosphere and the surface of Saturn’s moon Titan suggest that HCN-based polymers may have formed on the surface from products of atmospheric chemistry.

The primary photon absorption is predicted to occur in a window of relative transparency in Titan’s atmosphere, indicating that pI could be photochemically active and drive chemistry on the surface.

The thermodynamics for adding and removing HCN from pI under Titan conditions suggests that such dynamics is plausible, provided that catalysis or photochemistry is available to sufficiently lower reaction barriers.

Future detailed studies on proposed mechanisms and the solubility and density of the polymers will aid in the design of future missions to Titan.